The Italian priest who discovered soul of India 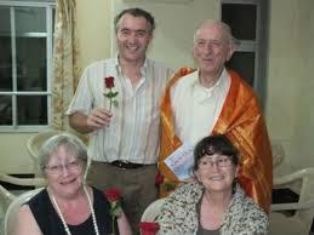 When I first met Fr Joseph Maurus Ferrero in 1980s, I had already read two of his books. So, my first question to him was: “How did you start writing?”

He answered casually, but with a smile: “When Primo Maestro (Blessed James Alberione, the founder of the Society of St Paul) came to Allahabad (in the northern Indian state of Uttar Pradesh) in one of the first year of our founding there, I told him “Primo maestro, we do not have books to publish.”

Unhesitatingly he told me, “If so, you begin to write.”

“And that is what I did. I had the blessings of Primo Maestro,” added the priest, who is popularly known as Maurus.

Fr Maurus, an Italian, was among the pioneers in India that the Society of St Paul in honored in 2014 while celebrating the centenary of its foundation.

The latest book from Fr Maurus, “Be Smart! Be You,” is just out from the press. His first book, Just a Moment Please, was published in 1957, the year he started his writing career. The English edition of this book has gone for 14 reprints. There was no looking back since then.

Be Smart! Be You is a guide to fulfilling our desire for happiness and discovering our true potential. It is for those who want to grow and to excel in the duties assigned to them. Its contents will enable the reader to be oneself and to make sense of what comes one’s way in the course of life. It’s about making “smart” decisions.

Fr Maurus is one of the founding fathers of the society’s Indian province. His contribution to society through the Pauline apostolate, and through his numerous books is unparalleled. As of today, he has written 128 books compiled and written within a span of five decades, with millions of copies in circulation around the globe in more than 14 languages.

The Spanish version of Just a Moment Please has been in the best-seller list of San Pablo, in Mexico and Colombia for 8 years continuously.

Apart from his love for writing, he has worked hard to nurture and develop the society’s publishing apostolate from Allahabad under the imprint of St Paul Publications, which was in its infancy when he reached Allahabad in 1953.

The publishing apostolate under his editorship had a phenomenal growth in the 1960s, and St Paul Publications, soon became the leading Catholic publishing house in the country.

Filled with the zeal for the missions, young Fr Maurus took no time to integrate himself into the socio-religious-cultural realities of India. This gradually made him realize that the Pauline apostolate should not be limited only to the baptized or the evangelized but should also be directed to the non-evangelized, and the result was the birth of a new sector in our Publishing apostolate: Better Yourself Books.

In November 1963, Fr Maurus along with Fr Aloysius Rego, a priest of the diocese of Allahabad, founded the national youth magazine The Teenager, the oldest surviving youth magazine in the country with a print run of 18,000 copies.

Fr Maurus is a voracious reader and he was deeply convinced that the destiny of a nation and the world is highly influenced by the wisdom, learning and experience of the past. In order to make it available to our generation, thereby enhancing the quality of their lives and of the world around, he founded another monthly of Anecdotes and Quotations with the title Inspirational Quote in 1976, one of the most sought-after magazines today among high school students and teachers.

He also had a passion for building up persons, institutions and infrastructure, while protecting and promoting environment, and developing human potential. During his tenure as the editor of St Paul Publications (1954–1980) he identified writing talent among many young ones and nurtured them with great care.

One among them is Fr (Dr) George Kaitholil, who grew up in the shadow of Fr Maurus, and has become an author of great repute, authoring numerous popular titles.

Another person, who is highly influenced by Fr Maurus all through his formative years and in his priestly ministry, is Fr Alfonso Elengikal, whose f book “You Are Destined for the Skies” is dedicated to his mentor. An entire chapter of his book You Can Make A difference – An Author With A Difference – is devoted to Fr Maurus.

While he was superior of the community of Allahabad (1961-1970), Fr Maurus “transformed the practically unknown Ranipur into a Pauline township,” says Fr Raphael Tonni, one of the former superiors general. During his tenure, new buildings were added to the existing ones, the press was modernized with the latest machines available. He also enlarged and renovated the community chapel, developed playgrounds, and opened a Book Centre at Civil Lines.

From 1977 to 1984, he was the superior of the community of Mumbai. After spending the best portion of his life for the Indian province and for the people of India, on January 26, 1985, he returned to Italy, after spending about a year in England.

After retiring from there, he spent nearly five years in Ariccia exercising priestly ministry among the Paulines, besides reading and writing. On March 3, this year, he was transferred to Bl. Timothy Giacardo Community at Alessandro Severo, Rome.

At the age of 91, today, he continues to be cheerful and active.