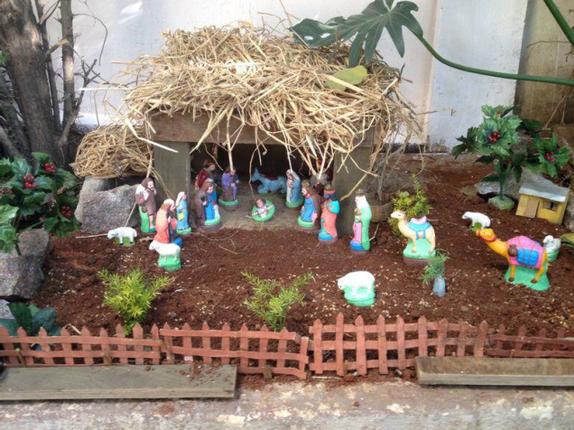 (Story: Matters India editor) When one thinks about Christmas preparations, it is the making of the crib that tops the list of priorities. Some have a traditional crib, a sort of family heirloom, while others make a different one every year.

Crib making is an exercise in skill executed with passion by either an individual or a group, the later is usually in case of a ward or a church or chapel crib.

Here I write about a person who has been making cribs since he was sixteen and, today at 76, his passion for the tradition has not diminished. This year he completes 60 years of crib making.

Lourenco Fernandes, whose open air, mechanised cribs attract hundreds of appreciative viewers, in a candid interview, talks about how he came to be involved in this art.

The Salesians celebrate the feast of Our Lady Help of Christians on May 24. Fr Joseph Carreno, a Spanish priest who was one of the pioneers of the Goa Salesian chapter, introduced a flag-making competition for the youth. Lourenco, a regular at Don Bosco Oratory, participated in the competition and won a prize. Fr Carre invited him to make a crib and as a gift he was given a set of statues depicting the Holy Family. The set was brought from Italy and Lourenco still cherishes it and uses the statues for the indoor crib he makes.

With that set he started making a crib at home in the veranda of his house. Every year he had a different theme with the Holy Family and the village as the background. His cribs were a novelty and people enjoyed visiting it. I, too, remember visiting his house with relatives and friends.

Lourenco boasts that even the last Portuguese governor of Goa, Vassalo e Silva, visited his house to see the crib. Goa’s first chief minister, Dayanand Bandodkar was also an appreciative viewer. In 1969, Lourenco celebrated the moon landing by using the replica of the spacecraft Apollo as a backdrop for the crib he made. The chief minister was so happy with the display that he visited twice along with ministers from the centre who on a visit to Goa at that time.

His tryst with mechanised cribs began post 1961. Lourenco had studied in the erstwhile Escola Tecnica e Comercial de Goa, the course of ‘Curso de electricidade pratica’. He went to Bombay and passed intermediate from the famous J J Scool of Arts and also underwent a course in Printing Technology, which presented him with the opportunity of joining the Imprensa Nacional, Government Printing Press, from where he retired as deputy director on superannuation. In Goa, he also underwent a course for supervisors in construction of the

Goa Public Works Department. According to Lourenco his skills and those he acquired from his studies are what help him put up the show every year.

Ever magnanimous, Lourenco is ready to share his knowledge in crib making with anyone who approaches him and even helps out with individual cribs. His philosophy is that after he is no more others can continue his work. He conducts courses in crib making for those interested.