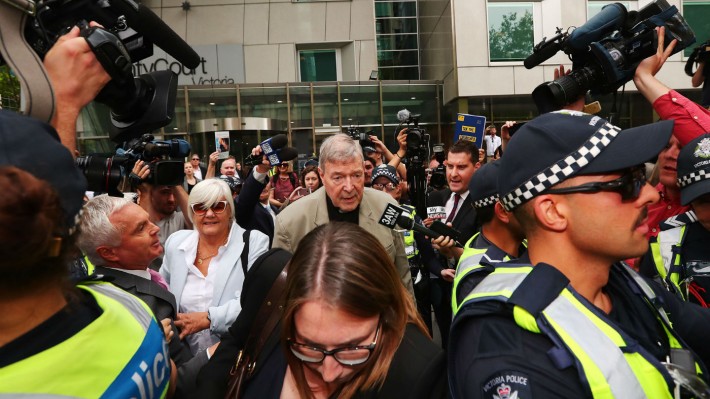 First let the Catholic church learn to treat all faithful in Jesus’ community on an equal footing. The so-called cardinals probably don’t believe in what Jesus taught and practised. Just recall all what he said in Mathew Chapter 23,  especially the words “you are all brothers only ”not Rabbis, Teachers, Fathers, Leaders, Masters” etc.

First let all church men learn to practise the equality of all humans, especially gender equality, treating male and female equally. All problems will vanish then. Never give any undue importance to the Hierarchical class. Jesus did not create them. Emperor Constantine did it. What we have today is a Church of Constantine.

Also give equal punishment to crimes committed to all, no matter who. In sexual matters rape is the worst. It is misuse of power. Ancient wisdom tells us: “Spare the rod and spoil the child!” This is more applicable to grown ups.

Truth is punishment for crimes is strictly enforced only in the Middle East, in Arab countries, to the extent of cutting off the hands of a thief.  They may even chop off the genitals of the one who rapes. There is fear of punishment and so crime rate is very low in Middle East. This must be the rule in the whole church and rape will immediately disappear from the Church.

In that spirit let the Pope and bishop enforce strict punishment for all sex-related crimes in the church, both to lay people and to cardinals. Equal treatment for all in rewarding and punishing should be the rule in the Church.

That is what equality should mean. So let us go back to the community Jesus founded – THE CATTLE CLASS – all problems will vanish. james kottoor, editor CCV.

Please read the report below on Cardinal Pell found Guilty

Cardinal George Pell has been found guilty of child sexual abuse after a trial in Melbourne. He becomes the highest-ranking Catholic figure to receive such a conviction.

Once the third most powerful man in the Vatican and Australia’s most senior Catholic, Pell abused two choir boys in the rooms of a Melbourne cathedral in 1996, a jury found.

The Guardian says his conviction “will cause shockwaves through a global Catholic congregation” and is a “blow to [Pope] Francis’s efforts to get a grip on sexual abuse”.

A Melbourne priest told the Sydney Morning Herald that verdict will cause "enormous devastation” to the Catholic Church and its followers.

The unanimous verdict was delivered on 11 December in Melbourne’s county court, but it could not be reported until now because of a suppression order.

A previous trial on the same charges, which began in August, resulted in a hung jury, leading to a retrial, where he was unanimously convicted of one charge of sexually penetrating a child under 16, and four counts of committing an indecent act on a child under 16.

The cardinal had pleaded not guilty, claiming that the charges against him were a series of “deranged falsehoods”.

As Pell left the court room, he was heckled by a crowd outside. One man shouted: “You’re going to burn in hell. Burn in hell, Pell.”

A statement released by his solicitor Paul Galbally said the cardinal “has always maintained his innocence and continues to do so.”

In a statement, one of Pell's victims – who cannot be named – described the case a stressful, and said it was “not over yet”. He said he had experienced “shame, loneliness, depression and struggle” because of the abuse.

The BBC points out that the Catholic Church worldwide has faced “a damaging series of allegations” relating to sexual abuse by priests, and claims that these cases were “covered up”. As Vatican treasurer, the 77-year-old cardinal was one of the Church's most powerful officials.

Pell’s conviction comes just days after a high-profile, unprecedented summit of cardinals and senior bishops in the presence of the pope at the Vatican, saw the Pope vow that the Roman Catholic church would “spare no effort” to bring abusers to justice.

Pell's conviction is a “stunning fall of grace for a man who once ran the Catholic Church in Australia with an iron fist”, CNN says. The cardinal is due to return to court tomorrow for a pre-sentence hearing.