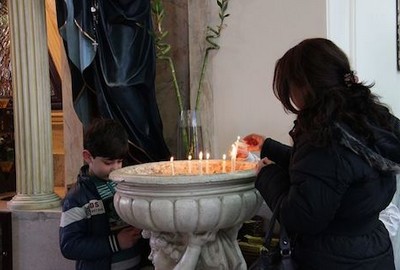 The number of persecuted Christians in the world has topped 100 million, according to a new report that says even non-violent persecution of Christians has increased, amid continuing violence.
“Even Christian-majority states are experiencing unprecedented levels of exclusion, discrimination and violence,” said David Curry, president of the California-based Open Doors USA, on Wednesday.
Curry’s organization has worked to help persecuted Christians for over 60 years.
It was founded by a Dutchman known as Brother Andrew. He smuggled Bibles into Eastern Europe, whose communist regimes severely restricted Christianity and other religions.

Curry said Open Doors USA’s 2015 World Watch List shows “a staggering number of Christians are becoming victims of intolerance and violence because of their faith.”
The list ranks the 50 countries where it is most dangerous and difficult to be a Christian. It defines persecution as “any hostility experienced as a result of one’s identification with Christ”. These can include imprisonment, torture, beheadings, rape, and loss of home and assets.
Christians can face ostracism from their family, job loss or rejection by a community.
Curry said some Christians “are being forced to be more secretive about their faith”.
North Korea continues to be the worst country for anti-Christian persecution, where an estimated 70,000 Christians are imprisoned for their faith.
The rapid rise of persecution in Africa and continued problems with violent Islamic extremism are also causes for concern.
Somalia, which has no functioning government, ranks second-worst. Iraq, where the rise of the Islamic State has added to the suffering of Iraqi Christians, ranks third. Syria, the site of an intense civil war whose factions include Islamic extremists, ranks fourth.
Afghanistan and Pakistan have also witnessed an increase in persecution, ranking fifth and eighth respectively.
Iran ranks seventh, while Sudan and Eritrea have returned to the top ten countries where Christians face the worst persecution.
Nigeria, where the government has been unable to contain the Islamic extremist group Boko Haram, is in the top 10 list for the first time.
Open Doors USA also noted problems in Uzbekistan, Vietnam, and India.
Christians in India, which ranks 21st on the report, face persecution from both Islamic extremism and Hindu fundamentalism.
Christians can be victimized by organized crime and corruption, especially those who are prominent in social or political life. Rural indigenous people who are Christian also experience hostilities, many Christians have been displaced from their land, and violence against Christian women is increasing. Church sermons are also monitored.
The researchers who compiled the report ranked each country’s Christians’ degree of freedom in living their faith in the private sphere as well as the spheres of family, community, national and church life. They also ranked the severity of violence Christians face.
Source: Catholic News Agency