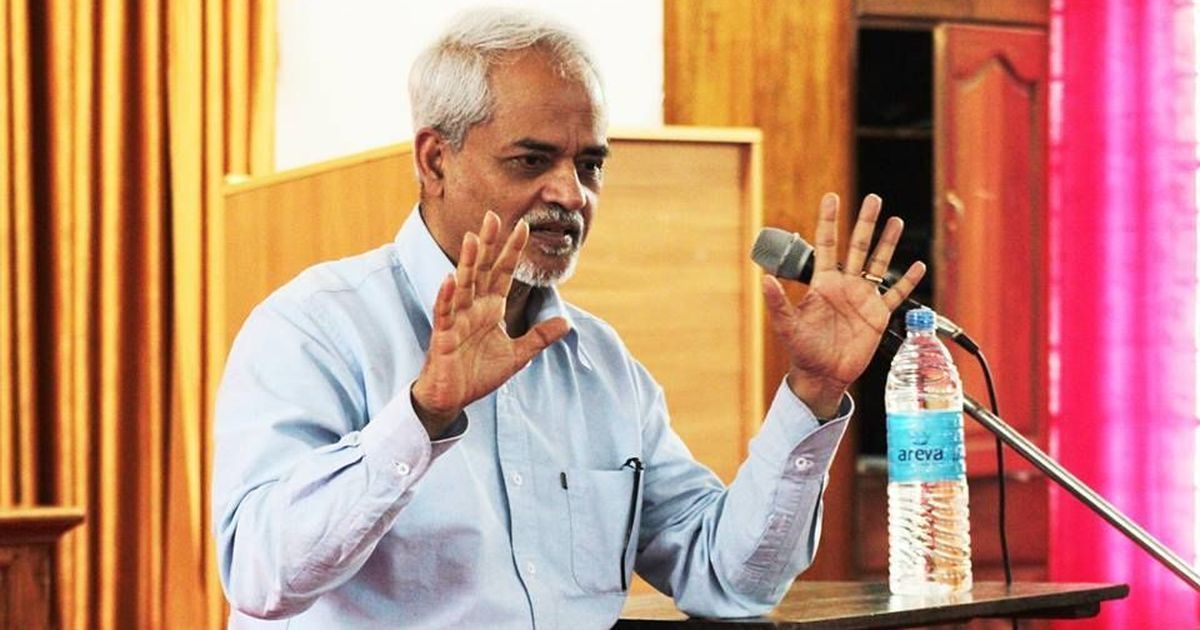 Valson Thampu as you know is one of our forceful and perceptive columnists. He is reacting to the latest post in CCV on the cartoon controversy surrounding Bp. Mulakkal.

One of the functions of journalism is to ‘educate entertainingly’. The tool used for this is often the cartoon. The essence of cartoon is Exaggeration, projecting Indira Gandhi with a larger than size protruding nose.  So cartoons have to be always with a pinch of salt.

But our columnist has something rational about the subject discussed and objected to by the Kerala Church. Lisen to him: james, editor.

Events arise from time to time that compel us to look beyond their fleeting news value. The controversy around the award conferred by the Kerala Lalithakala Academy on K. K. Subhash for his cartoon titled “Faith saves” is clearly one such. There are two possibilities why the controversy is sharp and strident: (a) it caricatures Franco Mulakkal and (b) it caricatures the cross, a key Christian symbol.

A basic question in this regard is this: “Whose grievance is this?” Obviously, the grievance is aired by the Kerala Catholic Bishops’ Conference. But, does it also echo the grievance, if any, of the Christian community in Kerala? This question is important because the cross is a religious symbol common to all Christian denominations in Kerala and churches all over the world. A second question pertains to the ‘form’ – or genre – in which this alleged offence is encased. A cartoon is a cartoon, after all. Cartoons have nothing to do with piety. It is not the work or duty of a cartoonist to fence the Mexican border of popular piety. His task is quite the contrary. It is to pick the bubbles of appearances and pretensions so that the hypocritical visages may emerge, now and then, from their hiding into public view. So, the all-important question is if a cartoonist should be allowed to exercise the non-conformist, creative freedom that is the life-blood of his art form. Should artistic freedom be shackled by religious forebodings, howsoever parochial?

This last question needs to be engaged with also because it is of supreme importance from the perspective of biblical spirituality as well. Ironically, the cross is theologically and symbolically connected to human freedom in the present context. Jesus came to set the captives free. Death on the cross was the price that he had to pay for human freedom. So, one thing is absolutely clear. The cross cannot be distanced from freedom and used as an alibi for suppressing creativity, which is the purest form of freedom. The most blasphemous abuse of the cross is to turn it, as a Jewish author once said, into a weapon of attack. Christians, he said, turn the cross in their hands right about and use it as a dagger. This is, admittedly, an exaggeration; but the exaggeration of a truth, both historical and contextual.

The KCBC is exercised over the defence of the cross. It is its business to be so. But the KCBC is laughably deluded if it assumes that the cross needs to be defended only against cartoonists and the alleged enemies of religion – a formulation ominously reminiscent of the Sangh Parivar rhetoric in the wake of Sabarimala – in the form of Communists. To assume otherwise is to be wilfully blind to the glaring historical truth that the foremost enemies of Christian religious symbols have been Christians themselves. Only Christians can drain their symbols of all meanings and make them a dish fit for cartoonists.  I cannot think of a single Christian symbol – from the Bible, to the cross, to the rites and rituals, to the vestments – that Christians have not cheapened and abused over the decades.

Consider, if you are not convinced, this very commonplace thing. There are dozens of Christian colleges in Kerala. All of them sport crosses as identity marks. Nearly all of them also abound in corruption. I have no doubt at all that the placement of the cross atop these institutional buildings is an act of desecration, given the meaning of the cross. In comparison the extent to which a cartoonist can belittle the cross is insignificant. What the protesting bishops overlook is the fact the people – unlike priests and prelates – see a cartoon only as a cartoon, and not as a theological or sociological or communal treatise! The bishops, by failing to see the dividing line between art and reality, caricature themselves! They had better save their own image. The Cross of Christ has taken care of itself over two thousand years without their help.

It is deeply disappointing that the government of Kerala has buckled under episcopal pressure. If Kerala Lalithakala Academy is an autonomous body, as it is mandated to be, this directive from the government to have a re-look at the award is a gross and indefensible interference in a domain where it has no expertise, or business, to intervene. The cartoon in question was selected for the award by a three-member independent jury. Is the sense of artistic meritto be fine-tuned to the political ad hocism of the government? If experts are treated in this fashion, which self-respecting person will venture to serve on such juries in future? The statement by Fr. Varghese Vallikkatt that the KCBC is protesting only because the awarding body is a government institution is meant to showcase the clout of the bishops with the government. This deserves to be denounced. Unless the spokesperson of KCBC is able to prove that the members of the jury acted as pera governmental nod, he needs to withdraw his statement.

A word about ‘hurting the religious sentiments of the people’ as alleged by Fr. Vallikatt. It is dishonest to claim that the KCBC, or any church body, has monopoly over the religious sense and sensibility of Kerala Christians. None of these church organs is democratic. They have no margin for accommodating ‘people’s sentiments’.  Most church leaders live at a great distance from the life and struggles of fellow Christians. They come out of their hideouts only when their interest are felt to beat risk. This is not the first time that cross figures in a cartoon. We have never had bishops protesting against the ‘abuse’ of this religious symbol. We have to wait a while to decide for ourselves if it is the Cartoonist or Franco Mulakkal who has insulted the Cross of Christ. Until this issue is settled, the KCBC has no right to militate in this context, and the government of Kerala has no excuse at all for suppressing creative freedom to oblige church oligarchs.