Pope Francis on marriage: It’s not about the dress or photos. It’s about the mission. 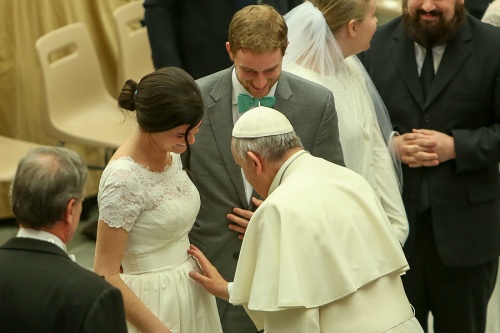 By Ann Schneible. Vatican City, May 6, 2015 / 10:10 am (CNA/EWTN News).- Marriage is more than the wedding ceremony, the flowers, the dress, the photos, Pope Francis said in his weekly general audience: it is a participation in the Church's mission.

“Men and women, courageous enough to carry this treasure in the 'earthen vessels' of our humanity… are an essential resource for the Church, as well as for the whole world!”

Speaking to the crowds gathered in Saint Peter's Square for his weekly catechesis, the Pope explained that each marriage which demonstrates the beauty of the sacrament enriches the life of the Church. In the same way, it “is impoverished when marriage is disfigured in any way.

Since the end of last fall, Pope Francis has been centering his Wednesday catechesis on the theme of family as part of the lead-up to the World Day of Families in September, as well as October’s Synod of Bishops on the Family.

During his May 6 address, the pontiff referenced Saint Paul's Letter to the Ephesians, in which the apostle makes the analogy between the love between spouses and Christ's love for the Church: namely, that “a husband is to love his wife as Christ loved the Church, by giving himself completely for her.”

The spiritual sense of this analogy is “revolutionary,” yet also simple and attainable for all who trust in God's grace, the Pope said.

Regardless of their limitations and sins, men and women are able to live out their marriage, the pontiff said, because it “has been inscribed in creation’s design by God.”

“The Christian vocation to love, without reserve and without measure, with Christ's grace, is the basis of the free consent which constitutes marriage,” he added.

Pope Francis also reflected on another characteristic of marriage: the choice to “marry in the Lord.” This decision, he said, carries with it a “missionary dimension,” through the willingness to be a channel of God's grace and blessings for everyone.

Christian spouses are participants in the Church's mission, the Pope said, insofar as they live for all people, not just for themselves.
Pope Francis challenged the faithful to ask themselves whether they – as believers and pastors – accept the “unbreakable bond” between Christ and the Church, and the history of marriage and family.

“Are we prepared to seriously accept this responsibility, which is that every marriage follows the path of love which Christ has with the Church?” he asked.