Is Pope Francis alone on apologizing to gays? 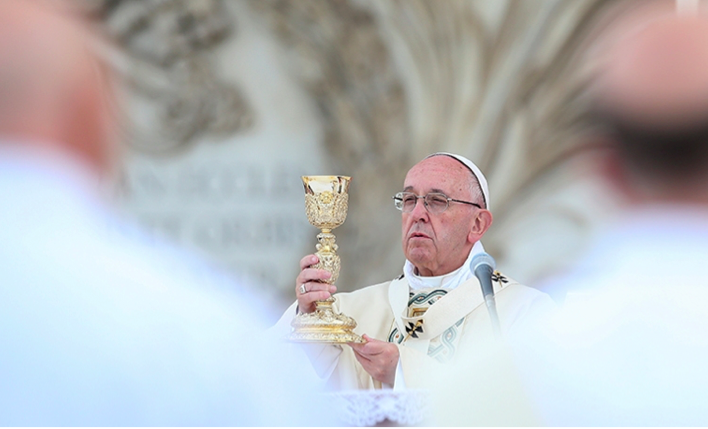 Pope Francis celebrates Mass during the Feast of Corpus Christi (Body of Christ) at St. Giovanni in Laterano Basilica, in Rome, on May 26, 2016. (Reuters/Alessandro Bianchi)

(Note:  This is  a very  ticklish issue. Some people still doubt and ask: “Did Francis Pappa actually ask us to apologize?” Listen now: "God help us! Next we'll have to apologize for teaching that adultery is a sin! Political Correctness (PC) is today's major heresy!" some one tweeted. Who?  None other than South African Cardinal Wilfrid Napier. So you are in company, not a bad company either. Yes there is tension and conflict of conscience everywhere since the whole church – clergy and laity – believed homosexuality, based on Sodom and Gomora biblical story was a grevious  sin.  The first to speak In support of gays were German (Cardinal Marx) and French bishops. Immediately after Orlando Masacre, Florida Bishop Robert Lynch wrote  very strongly against attacks on Gays  which  brought sharp reaction from other US bishops, a clear sign of a divided house on gays. Most of the American bishops and entirely so to say the African continent is dead set against homosexuality. Even so Pope Francis also was uncompromising in his statement to ask pardon. This is what he said on the Plane: After saying that the Church should apologize to gays he repeated: "Christians must ask forgiveness, not just say sorry."

How can Francis  be clearer? Why. Francis himself has gay friends towards whom he demonstrated his affection publicly during his US visit. In practice one has to bear a lot with those who support and oppose  gay people because habituated or indoctrinated attitudes will take time to change. james kottoor, editor)

When Pope Francis said this week that the church should ask forgiveness from gay people for the way it has treated them, he sparked yet another round of global headlines about how his unpredictable papacy is changing Catholicism.

But more than setting the church on a new course, Francis may have exposed the tensions within his own hierarchy over how to engage the gay community — tensions that have intensified in the weeks after the horrific massacre at a gay nightclub in Orlando that left 49 dead.

Francis' comments June 26 during an in-flight press conference on his return from a trip to Armenia came in response to remarks by German Cardinal Reinhard Marx, a top adviser to the pope. A few days earlier,Marx had said that the Catholic church, as well as society, had treated gay people in a "scandalous and terrible" way.

"The history of homosexuals in our society is a very bad history because we have done a lot to marginalize them. It is not so long ago and so as church and as society we have to say sorry," Marx told journalists after a lecture he gave in Dublin on the role of the church in a pluralist society.

That didn't sit well with some Catholics, including South African Cardinal Wilfrid Napier. "God help us! Next we'll have to apologize for teaching that adultery is a sin! Political Correctness (PC) is today's major heresy!" he tweeted.

Marx's line actually echoed what Florida Bishop Robert Lynch wrote a day after the June 12 massacre, when he opined that "it is religion, including our own, which targets, mostly verbally, and also often breeds contempt for gays, lesbians and transgender people."

Lynch, who heads the St. Petersburg diocese, added that "attacks today on LGBT men and women often plant the seed of contempt, then hatred, which can ultimately lead to violence" — a statement that drew sharp attacks from conservatives who said the blame lay with shooter Omar Mateen, a Muslim, and not with Catholics or Catholicism.

Lynch's words spread so far they prompted a remarkable public rebuke from a fellow prelate and Floridian, Miami Archbishop Thomas Wenski. At a June 19 Mass to mark the opening of an annual campaign for religious freedom, Wenski ripped those who said religion was a factor in anti-gay violence, and referring to Lynch — whom he described as "one bishop who should know better" — he asked: "Where in our faith, where in our teachings … do we target and breed contempt for any group of people? "Our faith, our religion gives no comfort, no sanction to a racist, or a misogynist, or a homophobe," Wenski said.

Needless to say, some other church leaders took a different tack. If they did not directly blame church teachings — which describe homosexuality as "objectively disordered" but say gays should not be subject to "unjust" discrimination — they did say Christians have been the source of anti-gay sentiment.

Then came Sunday's papal press conference when Francis was asked about Marx's remarks and the Orlando killings and about suggestions that Christians need to examine their own consciences when it comes to the treatment of gays and lesbians.

Francis shook his head in grief at the mention of Orlando and recalled church teachings that homosexuals "should not be discriminated against" and "should be respected, accompanied pastorally."

In an understandable bit of ball-spiking, Lynch the next day posted a response to Wenski and his other critics, writing: "Apropos recent comments concerning my last blog entry on the Orlando massacre I simply offer the following" — and he then cited the quotations from Francis and Marx about the church apologizing to gays.That was the ecclesiastical equivalent of a mic drop.But it was hardly the last word. Why is this such a contentious issue for the hierarchy?

For one thing, the experience of Catholic bishops may not track that of the wider public, which in recent years has grown used to gays and lesbians coming out of the closet to family and friends.That's not the case in the church, said Fr. James Martin, a Jesuit priest and editor at America magazine; gay people can be fired from church posts if they are open about their sexual identity.

"A gay friend of mine who worked for several years for an otherwise compassionate bishop told me that the bishop made so many snide comments about gay people, in my friend's presence, that there was no way he would ever be 'out' with him," said Martin, who has called on the institutional church to be more outspoken for the gay community. "So it's no wonder that many don't know many gays or lesbians," Martin wrote in an email. "The way to heal this is for bishops to do a simple thing: Get to know the LGBT community and listen to them."Francis himself has gay friends, and that may be one reason he is able to speak as he does.

Another stumbling block to a broader embrace of the pontiff's approach is the concern among some that expressing regrets to gays and lesbians would be tantamount to affirming their identity as homosexuals. That's one reason why many church leaders who expressed sorrow over Orlando and called for prayers did not mention that the shooter apparently targeted homosexuals.

In a response to Martin's comments after Orlando, Elliot Milco, an editor at the conservative journal First Things, said that to have done so "would be deeply misleading on the part of the bishops, since the Church cannot endorse this ideology." "Fr. Martin says that gay people are 'invisible' in the Church. To an extent, he is right — the Church, like Christ, refuses to mistake the mirage of sin and ideology for the reality of the people it encounters," Milco concluded.

Yet in his remarks a few days after Milco's essay, Francis used the word "gay" to refer to the community, which he has done before, and which rankles some in the church. A third factor at work is simply that it's not easy to say you're sorry — perhaps more so if you are a church that is dedicated to telling others where they have gone wrong.

"There are a lot of people at the Vatican who don't like the church ever admitting we ever did anything wrong," Fr. Thomas Reese, a Jesuit priest and senior analyst for the National Catholic Reporter, told The New York Times. "With gays, it is especially important because they are still subject to persecution and discrimination all over the world, and even in the United States." Finally, many churchmen, like Wenski — and more than a few laypeople — don't think the church is biased against gays. If some Catholics have acted that way, it's unfair to connect such behavior to the Orlando shooting or the almost commonplace level of violence against homosexuals in the U.S.

"There undoubtedly was a lot of anti-gay bias among Catholics — and everybody else — in the past, and some residual bias still exists," said Russell Shaw, a former spokesman for the U.S. Conference of Catholic Bishops and a veteran Catholic writer. "But in all my years as a Catholic, I do not recall any official encouragement being given to anti-gay bias by anybody speaking for the church, and today such bias is officially, and frequently, deplored and opposed."

"The long and the short of it in any case is that attitudes among Catholics have changed a great deal in recent decades, and it distorts reality to speak as if nothing had changed." Others would take that view even further.