Alliance between families and God can change the world, Pope Francis says 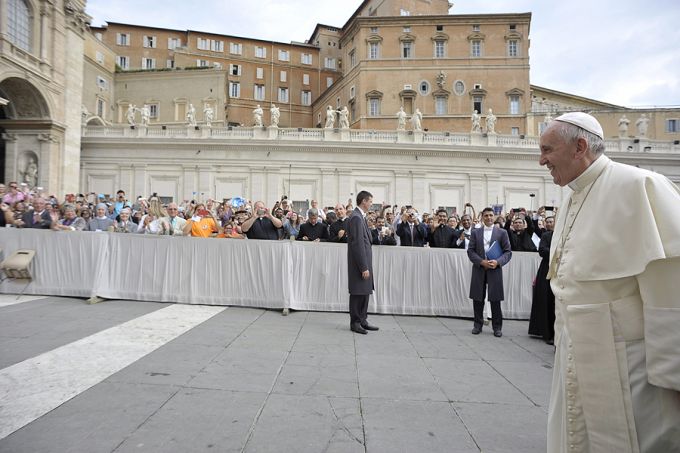 By Ann Schneible. Vatican City, Sep 2, 2015 / 11:31 am (CNA/EWTN News).- Encouraging families to hear God's word and to put it into practice, Pope Francis said Wednesday that the family, by being allied with God, is called to counteract the “desertification” found in today's cities.

“Our cities are becoming desertified for lack of love, for lack of smiles,” the Roman Pontiff said, addressing the crowds gathered in St. Peter's Square Sept. 2 for the General Audience.

Cities have “many diversions, many ways of wasting time, of laughing, but love is missing,” the Pope said. However, the family has the ability to overcome this.

“The smile of a family is able to defeat this desertification of our cities. This is the victory of the love of the family.”

Since last autumn, Pope Francis has centered his Wednesday catecheses on the family, as part of the lead-up to the World Day of Families in September, as well as October’s Synod on the Family; today's address was the last in the year-long series.

Throughout his catechesis, Pope Francis stressed the significance of “familial affections” and “the importance of families for spreading the faith” and for “helping to build a more human society.”

Although the Gospel says to love Christ more than our parents and children, it is not Jesus' intent to “delete the fourth commandment” – honor your father and your mother –  the Pope said.

“Neither can we think that the Lord, after having performed his first miracle for the spouses at Cana, after having consecrated the conjugal union between man and woman, after having returned sons and daughters to family life, asks us to be insensitive to these ties!”

“On the contrary, when Jesus affirms the primacy of faith in God, he does not find a more significant comparison than family affections,” he said.

Pope Francis said the “knowledge of affection” is the “best gift of familial genius.” If we do not learn this “grammar” in the family, it becomes difficult to learn it well.

“And it is properly through this language that God makes himself understood to all.”

“The invitation to put family ties within the scope of obedience to the faith and the covenant with God does not demean them,” the Roman Pontiff explained. Rather, “it protects them, frees them from egotism, guards them from neglect, leads them safely to endless life.”

Such family affections are a source of blessing, and “bring hope on the earth,” the Pope said, adding that when transformed by the Gospel, “they become capable of unimaginable things.”

Pope Francis gave the example of men and women who put themselves at risk and even sacrifice themselves for someone else's child. He said this is the sort of love “which many scientists no longer understand.”

“And where there are these familial affections, these gestures from the heart are more eloquent than words.”

Pope Francis concluded his catechesis by praying that the Spirit may bring “happy disarray” to Christian families, and that “the city of man finds a way out of its depression.”