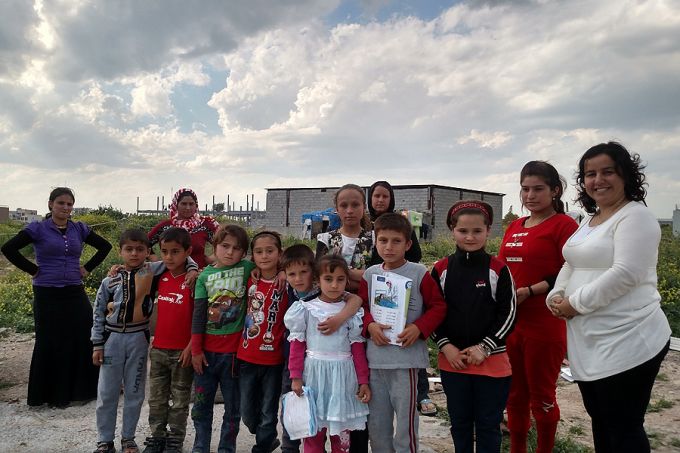 In the picture: Shelan Jibrael (far right) stands with a group of refugees in Erbil, Iraq. Credit: Alejandro Bermudez/CNA.

By Alejandro Bermudez – Erbil, Iraq, Apr 6, 2015 / 03:28 pm (CNA/EWTN News).- Shelan Jibrael’s office is located in the Iraqi city of Erbil, where tens of thousands of Iraqi Christians displaced by the Islamic State have immigrated.
But on any given day, she is much more likely to be found in one of the various refugee camps around the city, looking after not only the Christians but also those who find themselves in a much more dramatic situation: the Yazidis.
The Yazidis are a small ethno-religious community, most of whom lived in Iraq's Nineveh province prior to the Islamic State's advent last year. Their religion is syncretistic, and some Muslims consider the Yazidis to be devil worshippers
“Our Christian brothers and sisters are suffering terribly but at least they can count on the solidarity of our brothers and sisters in the faith around the world,” Jibrael told CNA. “The Yazidis on the other hand have nothing and nobody, they are the poorest of the poor.”
Despised by Muslim authorities, the approximate 450,000 Yazidi refugees have a hard time finding help.
Jibrael, an Iraqi Christian, works for Ivy, a non-religious affiliated Japanese NGO. She cares not only for fellow Christians, but for displaced Yadizis, whom she describes as being largely forgotten and desperately in need.
According to Jibrael, “there are hardly any refugee camps in Dohuk, the other city in Iraqi Kurdistan, but most of the Yazidis are scattered throughout Kurdistan, and a lot of them survive by staying in temporarily abandoned buildings in Erbil.”
Jibrael took CNA around to visit a group of buildings in Ankawa, a suburb of Erbil, that are half-built due to the temporary crisis that has halted construction. Yazidi families, many consisting of only women and children because the men were killed by the Islamic State, are surviving by covering up windows and doors with plastic sheeting.
One young refugee girl, Elmyra – which means Princess – acted as a guide through the labyrinth of half-built apartments.
Jibrael translated the testimony of the lively nine-year-old Yazidi girl from Kurdish.
“My daddy is alive, not like the other children that have lost their father; but my brother is sick,” Elmyra said. Her older brother, who is 11, is suffering from the post-traumatic stress effects of the violence, and also needs an operation to correct a problem with his eyes.
In coordination with a group of Catholic doctors from Slovakia, Jibrael has promised to return in the coming week to take care of the most urgent cases, including a possible heart patient.
“The Yazidis’ needs are endless, and we Christians know that charity obliges us to go beyond the borders of our own community,” Jibrael said. “If we aren’t concerned about them, nobody will be.”