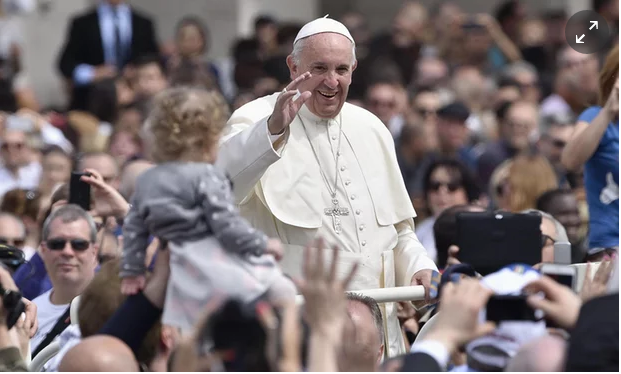 Pope Francis delivering a message at the end Easter mass at the Vatican on March 27. CreditL'Osservatore Romano

(Note:  Did   the long awaited Papal Exhortation bring “Joy of Love” to all? Partially!, could be the right answer, as conservatives and liberals were expecting Francis to endorse most of their views. But he did not in either case. What he did  was to decentralize decision making, leaving local bishops to apply rules according to the  needs of the place. So there is no cut and dry rules for the whole universal church. Liberals were disappointed on contraceptives, communion for divorced and more roles for women. Conservatives are unhappy for not giving rules and principles top priority but to pastoral exigencies which change from people to people and harsh living conditions of families. So there is not much joy or love for what both the parties got from the pope. That may prepare the ground for  more heated discussion or to follow one’s own conscience and not that of  the celibate priestly class. In any case long drawn heated discussion is bound to go on in the days to come. james kottoor, editor)

ROME — In a broad proclamation on family life, Pope Francis on Friday called for the Roman Catholic Church to be more welcoming and less judgmental, and he seemingly signaled a pastoral path for divorced and remarried Catholics to receive holy communion.

The 256-page document — known as an apostolic exhortation and titled “Amoris Laetitia,” Latin for “The Joy of Love” — calls for priests to welcome single parents, gay people and unmarried straight couples who are living together.

“A pastor cannot feel that it is enough to simply apply moral laws to those living in ‘irregular’ situations, as if they were stones to throw at people’s lives,” he wrote.But Francis once again closed the door on same-sex marriage, saying it cannot be seen as the equivalent of heterosexual unions.

The document offers no new rules or marching orders, and from the outset Francis makes plain that no top-down edicts are coming. Alluding to the diversity and complexity of a global church, Francis effectively pushes decision making downward to bishops and priests, stating that a different country or region “can seek solutions better suited to its culture and sensitive to its traditions and local needs.”

But Francis also makes clear the vision he wants local bishops and priests to follow: as a church that greets families with empathy and comfort rather than with unbending rules and rigid codes of conduct.The scope of “Amoris Laetitia” is typical Francis: a broad-ranging blend of biblical passages, meditations on marital love, homespun advice on familial manners, passages bemoaning the frenetic loneliness of modern life and a call for families to come closer to the church, and vice versa.

He admits that the church has made mistakes in alienating families and dedicates many passages to describing the pressures brought on families by poverty, migration, drug abuse and violence.Just as he used his environmental encyclical, “Laudato Si’,” to call on national governments to enact legislation to fight climate change, Francis now calls for governments to provide support for families in the form of health care, education and employment. He describes families as under siege by the pressures of modern life.

“This is a broader cultural problem, aggravated by fears about steady employment, finances and the future of children,” he wrote.Although Francis has earned a reputation as a reformer, some liberal Catholics may be disappointed. Many had hoped Francis might go further, perhaps by detailing health exceptions to the ban on contraception, expanding the roles for women in the church or prescribing a clear process that would permit Catholics who divorced and remarried outside the church to receive communion.

“It wasn’t as innovative as many had hoped,” said Lucetta Scaraffia, a scholar of Catholicism in Rome, adding, “The result is quite modest with respect to the investment and expectations that the world had.” The document is likely to stir debate and disagreement among many Catholics, especially in interpreting the pope’s language explaining how priests should work with divorced and remarried Catholics to help them return to full standing in the church.

Francis convened two successive assemblies, or synods, of bishops from around the world to examine the challenges facing modern families.Synods under Francis’ predecessors were sleepy affairs, but Francis told the bishops he wanted them to relatively speak their minds without holding back. And they did.

Both synods were contentious and, the participants said afterward, ultimately enlightening. The battle lines were basically drawn over what it means for the church to be pastoral and merciful in its approach to people who are not living in accord with the Christian ideal of the intact, nuclear family. How far should the church bend to respond to modern life or to bring people back?

Both synods concluded with final reports written by participating bishops, and Francis has drawn extensively on those reports in his exhortation.Francis adopts the solution introduced by the German-speaking bishops at the second synod: inviting divorced and remarried Catholics who have not had their first marriages annulled to seek the counsel of a priest. The priest, in private and personal conversations known as the “internal forum,” could help them to examine their conscience and determine their future participation in church life.

A synod of Roman Catholic bishops met in 2014 to begin a discussion of the church’s teachings on the family. The Times asked readers how the church’s rules on divorce had affected them.

“ ‘Amoris Laetitia’ is a quietly revolutionary document,” said the Rev. James Martin, a Jesuit who is editor at large for America magazine. “It restores the role of personal conscience and reminds pastors to meet people where they are. It will be a great encouragement especially to divorced and remarried Catholics and anyone who feels they have been unwelcome in the church. The message is: Welcome.”

Conservative Catholics, who have already expressed concern that Francis could destabilize the church and undermine doctrine, were far less impressed. R. R. Reno, a Catholic theologian and editor of First Things, a conservative journal of religion and public life, lamented what he called a “muddy” document that substitutes the church’s “rules and laws and requirements” with “talk about ideals and values.”

“I think it’s an ill-judged shift,” Mr. Reno said. “This document clearly opens up the possibility that a priest may determine that a divorced and remarried person is worthy to receive communion, but under what terms and why is muddy.”At a Vatican news conference to unveil the document, Cardinal Christoph Schönborn of Austria said that Francis was trying to erase the distinction between “regular” and “irregular” families, even as he continued to advocate the Christian ideal of marriage.

Cardinal Schönborn, himself the child of divorced parents, said the pope’s message is that God’s mercy applies to all. “No one must feel condemned,” he said. “No one is scorned.”Cardinal Schönborn noted that Francis’ “pervasive principle of inclusion clearly troubles some people,” for example those who are concerned that the pope favors a mentality of “anything goes,” an allusion to conservative Catholic critics. He argued, however, that the pope is not changing church doctrine on the family but is deepening the understanding outlined by Pope John Paul II in his own document on the family, “Familiaris Consortio.”

“It is a classic example of the organic development of doctrine,” Cardinal Schönborn said. “There is innovation and continuity.”Homosexuality was another hot-button issue, and Francis took his cues from the majority view in the synods. (During the first synod, an interim report written by a committee of bishops used language that was strikingly welcoming to gay people, but it received so much criticism from other bishops at the synod that it was gone by the final report.)

Echoing the report issued by the second synod in 2015, Francis’ exhortation says that “every person regardless of sexual orientation” should be treated with respect and consideration, while “every sign of unjust discrimination is to be carefully avoided, particularly any form of aggression and violence.”

But in the next section, he states categorically that the church cannot countenance same-sex marriages or unions, citing the second synod’s final report, which said “there are absolutely no grounds for considering homosexual unions to be in any way similar remotely analogous to God’s plan for marriage and family.”

The document “does not inspire joy in L.G.B.T. Catholics and their supporters,” said Francis DeBernardo, the executive director of New Ways Ministry, an advocacy group for gay Catholics. “While not expecting a blessing on marriage for lesbian and gay couples, many were anticipating that Pope Francis would offer an affirming message to L.G.B.T. people, and not the same ill-informed comments,” said Mr. DeBernardo, who is based in Maryland. “Where is the Pope Francis who embraced his gay former student and husband during his U.S. visit? Where is the Pope Francis who invited a transgender Spanish man for a personal meeting at the Vatican? This Pope Francis is hard to find in his latest text.”

But this was the rare harsh passage in what is otherwise a fatherly letter to the church. Francis is releasing it during a year he has declared to be a Jubilee of Mercy. At every opportunity, he has been reminding Catholics that forgiveness and mercy are the heart of their faith.604COMMENTS

“No one can be condemned forever, because that is not the logic of the Gospel!” the exhortation says. He adds that he is speaking not only of the divorced and remarried, “but of everyone, in whatever situation they find themselves.”

Jim Yardley, who has been covering Pope Francis since his election, reported from Rome, where he is The Times’s bureau chief; Laurie Goodstein, The Times’s national religion correspondent for nearly two decades, reported from New York. Elisabetta Povoledo and Gaia Pianigiani contributed reporting from.