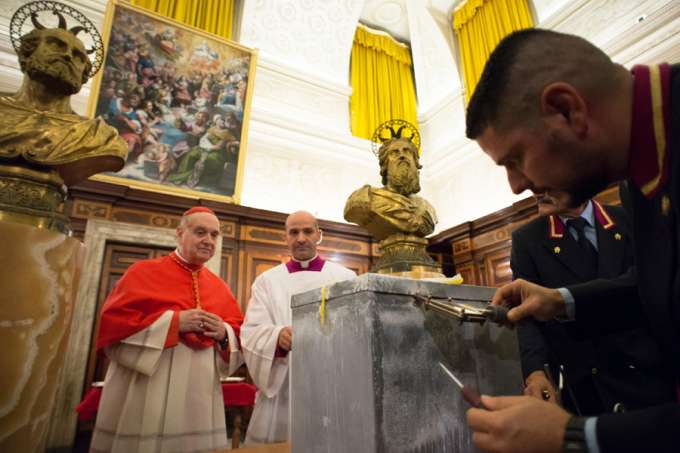 By Elise Harris. Vatican City, Nov 19, 2015 / 06:04 am (CNA/EWTN News).- Hidden since the Jubilee of 2000, the Holy Door in St. Peter’s Basilica was revealed Tuesday as the brick wall covering it was removed in anticipation of the Holy Year of Mercy launching next month.

Cardinal Angelo Comastri, the Archpriest of St. Peter’s Basilica, led a special “recognitio” ceremony, culminating in the removal of the brick wall.

According to a Nov. 17 communique from the Vatican, after the cardinal presided over a procession and brief prayer service, workers began to remove the wall brick by brick, beginning with the extraction of a small zinc box containing mementos from the Jubilee of 2000.

Opened with a type of blowtorch, the box held several documents of certification for the closure of the Holy Door in 2000. It also held the keys with which Pope Francis will open it Dec. 8 – the Feast of the Immaculate Conception – when this year's Extraordinary Jubilee of Mercy officially begins.

Also inside the box were the parchment deed for the previous jubilee, a few bricks and several commemorative medals.

The box's contents were entrusted to the Master of Ceremonies for St. Peter's Basilica, Msgr. Guido Marini, who was also present for the “recognitio” ceremony. Additionally, Archbishop Rino Fisichella, President of the Pontifical Council for the Promotion of the New Evangelization, was also in attendance.

Each of the four major basilicas in Rome has a holy door, which are normally sealed shut from the inside so that they cannot be opened. The doors are only opened during jubilee years so that pilgrims can enter through them in order to gain the plenary indulgence that is connected with the jubilee.