New star in a crowded sky? On Kamal Haasan’s  Entry into Politics! 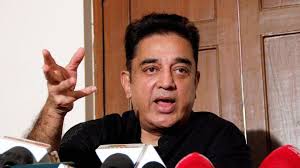 For all his challenges, Kamal Haasan appears to be in tune with Tamil Nadu’s historical preoccupation with welfarism.

(Note: The churning of Palazhi (milky sea) has been going on interminably to the despair of every God on earth. So far Palazhi has been turning out to be a Dead Sea producing all sorts of deadly animals or their skeletons.

To the comfort of the dispirited churners, finally it looks that a beaming star has been thrown up in the blue sky in the person of Kamal Haasan with all smiles lighting up almost all on-lookers.

The proverbial Amma of Tamilnadu produced too many children but no legitimate one to succeed her resulting in unending factional feuds. Tamilnadu’s has been a silver screen politics ever since MGR. This time Palazhi churning has thrown up not one but two superstars – Haasan and Rejnikanth — to contest as gladiators in the coliseum of voyeuristic onlookers.

On the silver screen victory has always been for the happy mix of money, muscle and sex everywhere, especially for the Tamil person. But Haasa’s historical Dravidian roots go back, as the writer points out, to Periyar’s atheistic, rationalist and correct, Philo-sophical leanings.

Today in the 21st century,  the modern Tamilian has to go soft on traditional anti-Brahmin, anti-Hindu, anti-Hindi and anti-North-India undertones in favour of a broad, inclusive stand of political accommodation which can be effectively communicated fast only through a de facto lingua franka, English which doesn’t come easy for Rejni.

It is here that Kamal Haasan has an edge on his friend and competitor Rejni. Rationalistic atheism and belief in the God of organized religions are in open conflict in our times. So one  has to wait and see how the battle of celluloid stars is going to turn out and in whose favour. james kottoor, editor,ccv.

Read below the Hindu Report

The timing of cinema superstar Kamal Haasan’s entry into politics can be considered brilliant or too little too late, depending on the prognosis for Tamil Nadu’s troubled polity.

This has been manifested in the meltdown of the AIADMK into bitter factionalism and in the unleashing of a cycle of power struggles to control the reins of the party. At one point, three separate vectors of power vied for the party crown, led by Edappadi K. Palaniswami, O. Panneerselvam, and T.T.V. Dinakaran, respectively. Simultaneously, the fortunes of the DMK have slipped into uncharted territory, with the party’s mantle going to Mr. Karunanidhi’s son, M.K. Stalin, a capable leader perhaps but one who has never before occupied the Chief Minister’s seat.

In this regard, Mr. Haasan has timed his entry well, as he stood virtually no chance of winning while these titans of the Dravidian movement reigned. Had he delayed his entry further, however, he would have risked losing ground to another inimitable challenger, fellow actor and the mega-superstar, Rajinikanth. Mr. Rajinikanth, who announced his political entry at the turn of the New Year, carries the hopes of millions of his fans but may have ceded a palpable advantage to Mr. Haasan by not outlining a cocrete policy agenda, identifying party members or charting a political strategy in terms of alliances.

While this much is in Mr. Haasan’s favour, the secular decline in governance quality that began at least as far back in time as the 1990s has accelerated. This places limits on how much transformation his potential campaign could aspire for. Essentially, the past few decades have witnessed the rise of a massive rent-seeking and extortion network built on a culture of goonda politics. This has permeated every corner of the government and led to capital flight, with numerous foreign companies choosing neighbouring States for their ventures.

This collapse in governance, reflected in the failure of the ruling party to execute government programmes efficiently and deliver relief to a State that has suffered multiple natural and man-made calamities, has been driven in large part by a patron-client relationship that governing elites enjoy with the governed. The result of last December’s by-election in the R.K. Nagar Assembly constituency, which is acknowledged to have turned entirely on cash payments made to its electorate, is only one recent and disturbing illustration of how the polity has effectively been marketised.

Yet, while Jayalalithaa was alive and Mr. Karunanidhi was in charge, the two Dravidian parties had little trouble securing the mandate of the people in election after election. In part this was achieved through the sheer money-muscle combination. To a considerable extent the weight of 20th century history has been the wind beneath these parties’ wings. The Dravidian movement was quintessentially an ethnic mobilisation of common Tamil men and women who, in 1967, uprooted and overawed the Congress party’s political networks that were based relatively more on patronage allocation through local elites.

Mr. Haasan lacks a living, historical connection to this movement, unlike some of his potential rivals. It is true that Dravidianism no longer exists in its prior radical form. It has, at least since the 1990s, shed its anti-Brahmin, anti-Hindu, anti-Hindi and anti-North-India undertones in favour of a broad, inclusive strand of political accommodationism for all Tamils. Yet, there is a residual feeling of Tamil exceptionalism which motivates voting behaviour, and continues to present an opportunity to politically mobilise.

Despite this lacuna, Mr. Haasan does enjoy one inherent advantage that could yet help him project a close tie to the needs of the Tamil person: his worldview appears to be in sync with those of the forbears of the Dravidian movement such as Periyar. First, he considers himself an atheist and a rationalist, which is the correct philosophical leaning for Tamil Nadu.

Second, his apparent leaning toward left-of-centre politics and a distaste for Hindutva suggests that he is in tune with Tamil Nadu’s historical preoccupation with mass welfarism and that he has moved past his own Brahmin origins — not unlike Jayalalithaa herself.

Finally, being equally comfortable in Tamil and English, he has left open the option to straddle the worlds of the elites and the masses in this State, an important asset for an aspiring leader.

Between these countervailing forces that could either boost Mr. Haasan’s bid for power or bring it crashing down, the ultimate outcome would hinge upon his ability to answer this: what are the most urgent needs of the common Tamilian today, and how can he signal that he is the best candidate to deliver on that need?

Secondary questions that he will have to answer revolve around the nature of the party organisation that he will build up to make such political action a reality — in particular, whether it will have sufficient capacity in terms of resource allocation and if he will be able to establish an organisational culture that eschews rent-seeking.

Yet, if he can adroitly manoeuvre through the inescapable obstructionism that the Dravidian incumbents will thrust onto his path, he may yet turn out to be the jolt of political uprightness that the Tamil Nadu ecosystem so desperately requires.(narayan@thehindu.co.in)