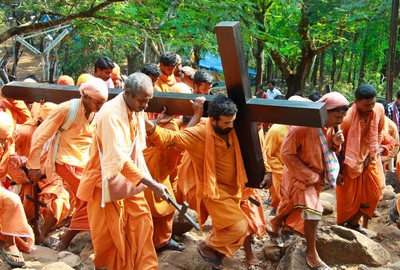 The joint effort by the government and the church is aimed at dissuading devotees from bringing plastics and disposables during the pilgrimage season.

Koch(UCAN)i: The Suchitwa (cleanliness) Mission of the Kerala State government has teamed up with Malayattoor Church Festival Committee, district administration, forest department and Pelican Foundation to initiate green protocol during the Malayatoor pilgrimage season this year.

Millions of faithful from across Kerala climb the ‘Kurisumudy’, the mountain atop which Apostle St Thomas is believed to have erected a cross, during the Lent and up to the annual feast known as 'Malayatoor Puthunjayar Thirunal' celebrated on the first Sunday after Easter.

The joint effort by the government and the church is aimed at dissuading devotees from bringing plastics and disposables during the pilgrimage season. As per the protocol, pilgrims would not be allowed to carry any disposable plastic items to the shrine.

According to festival committee, arrangements would be made to provide purified drinking water and reusable cutleries to devotees along the trekking path to Kurisumudy. Measures would also be taken to avoid selling of candles in plastic covers with the help of police and state revenue department. Food counters on the church premises would use only steel plates and glasses.

Suchitwa Mission has agreed to arrange stainless steel cutleries and volunteers or paid personnel to assist in cleaning of the vessels. The tradition of distributing butter milk would be revived to reduce the consumption of packaged soft drinks. A campaign will be launched next week to spread the message.