Cardinal calls for a fight against communalism 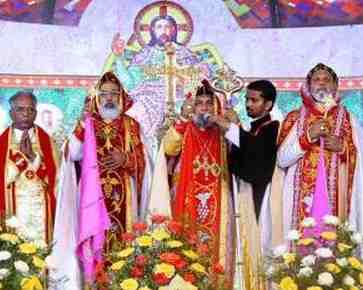 Pathanamthitta (Matters India): The 85th Reunion Meet of the Syro-Malankara Catholic Church came to a close with a massive rally from Thirumoolapuram to the St John’s Metropolitan Cathedral in Thiruvalla town on Monday afternoon.

Inaugurating the public meeting held in connection with the valedictory function at Mar Ivanios Nagar at Thirumoolapuram, Cardinal Baselius Cleemis Catholicos called upon the believers to fight against communalism and strive for nation’s development.

He said the Hindus, Christians, Muslims, Jains, Buddhists and other believers as well as the atheists should strive for the unity of the country. All of us are bound to protect the unique unity in diversity of India, he said.

The Cardinal was the chief celebrant of the Holy Mass held earlier, in the forenoon. The Pala Bishop, Mar Joseph Kallarangatt, delivered the benedictory speech.

The Metropolitan Archbishop of Thiruvalla, Thomas Mar Coorilos, said the founder Archbishop of the Church, Geevarghese Mar Ivanios, had initiated the work of the reunion movement under the guidance of the Holy See, especially in the light of the Apostolic Decree, Magnum Nobis, of Pope Pius-XI.

Mar Ivanios had established the first parish of the Church at Thirumoolapuram, and he stayed there in a small building for some time before establishing the Archieparchy of Trivandrum, later.

The building at Thirumoolapuram from where Mar Ivanios had begun his Church reunion mission in 1930 has been modified into a museum called Beth Abo D’Malankara.

Chief Minister Oommen Chandy also addressed rally on its arrival at the St John’s Cathedral, later, in the evening. The Cardinal handed over consent forms signed by one lakh people for organ donation to the Chief Minister on the occasion.