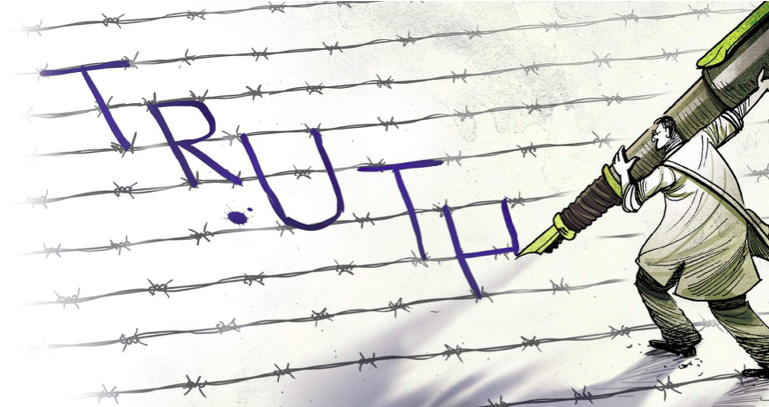 “Truth is mighty and will prevail!” It ought to, but often it is lies and falsehood, like ‘post-truth’ or ‘fake news’ that often prevails. This disastrous trend can be countered only by making the “Pen mightier than the sword” by a new breed, a battalion of the brave among present-day writers ready to die so that truth may live.

It is in this context that an intellectual and perceptive writer like Valson Thambu (see his article on ‘Journalism’ below) reminds us that it is the duty of every journalist to make truth triumph. How can any scribe with vision, conviction and action, fail to believe in such a noble profession? It may be  because many a scribe today is led by profit motive than professional excellence.

The writer speaks of Voctor Hugo’s History of crime. Who in fact is the first and accurate historian of world events, if not the journalist? That is why journalism is called ‘History in a hurry’, daily busy recording hot facts and the ‘where-for’ of those facts and revolutionary views. “News is not news if it is not new.” That is why journalists are 24-hours on the run in search for the latest, the new, because only the publication which comes with the latest news is acclaimed as the winner among publications.

In times gone by, the defense of all journalists was they were all true to facts no matter how bad the news or views happened to be. Hence the axiom: “Facts are sacred, opinions free.” But today we have a new breed of journalistic jargon like: “embedded journalists” “accredited journalists” (for both, their loyalty is not to truth but to what pleases their employer), “alt-truth”, “post-truth”, “fake news”, “prestitute” (for the profession) – all duplicates voraciously consumed to the detriment of the consumer who drinks adulterated liquor.

It is here that journalists have to be “spiritually sensitive and philosophically enlightened” to hold aloft their name and fame. For them their profession is not just a means of livelihood but a battle of the brave to prove their mettle, their heroism, in the midst of their struggle to make ‘truth’  triumph. Such journalists have no fixed short-lived shell life like paper cups used once and thrown away instantly. How many such journalists are there in the company of world leaders like Trump, UK PM,May, Turkey President or even with our popular PM Modiji?

In todays world of instant communication and throw away culture how many journalists with substance of permanence can we think of? An Edward Snowden of Wikileaks is spoken of on the world stage. On the Indian horizon we had an Arnab Goswamy, a Barkha Dutt, Rajdeepsardesai etc who were the talk of the town as anchors. Why are they no more? Is it because they were or not “embedded” journalists? Who is at fault?

So beware journalists who want to be true to their ennobling profession. Let them hold fast to TRUTH and truth will never let them down. Make the pen (see cartoon in this piece) mightier than the sword! james kottoor, editor, ccv.

Why I still believe in journalism! – Valson Thampu, in New Indian Express, 17th May 2017

Wasn’t Socrates a journalist? What do you call a man who walks and talks with those he comes across in the street? How do you classify one who is intrepid in asserting reality in the face of entrenched myths and lies, like Walter Lippmann did, for example, in his book titled Public Opinion? Or B G Verghese did as a journalist? Or Ramnath Goenka as a publisher of the Indian Express during the infamous Emergency?

Wasn’t Victor Hugo, for that matter, a journalist? Do we know of any better piece of journalistic writing than The History of a Crime, his microscopically accurate and elaborately detailed account of the atrocity unleashed on Paris by Louis XVIII? Hugo may seem to resemble—only seem, mind you—the ‘embedded journalists’ of our times, accredited, under safer conditions, to file stories from the war-front. Like a Christiane Amanpour (CNN). A Barkha Dutt or, sometimes, a Sreenivasan Jain (NDTV). Or, at times, a Gaurav Sawant (India Today).

Was not Tolstoy an incisive journalist in writing Sevastopol, The Census in Moscow and What Shall We Do? And how can we forget the likes of Charles Dickens, Herbert Spencer, Joseph Addison and Richard Steele?

Closer to our times, how are we to describe that prodigious philosophical talent called Hannah Arendt, who was engaged by the New Yorker to report on the trial of Adolf Eichmann, the compilation of  which became a gripping narrative titled Eichmann in Jerusalem (1963) and minted a neologism, the banality of evil? The citations above are, obviously, suggestive, not exhaustive. What does this cherry-picked minuscule list suggest then? Well, many things.

First, journalists were, for the most part, spiritually sensitive and philosophically enlightened people. They had a clear and acute sense of history. They held themselves accountable to the destiny of our species. I wonder if any newspaper today would trust an academic philosopher like Hannah Arendt to cover a sensational political event. Of course, it is another matter that academia today does not have the likes of Arendt anymore. In point of fact, an above-average journalist today is better informed and endowed than a professor in most Indian universities.

Second, which follows from the first, they were men and women of stature. What characterised them was not power, influence or affluence, but greatness. They had character. I wonder if we have journalists like Victor Hugo who threw in his lot with the Republicans in the face of overwhelming odds and fought alongside the workers and the middle class in Paris to resist the overwhelming might of the emperor in 1851. It is doubtful if there is an account of a historical event more gripping than Hugo’s The History of a Crime. Journalism of this order is written in blood warm with life, not livelihood.

Third, the journalists that we have mentioned had an awesome sense of responsibility towards their societies. As human beings, they did have pressures and pulls, inclinations and affinities, that pulled them in contrary directions. But they transcended all such distractions and remained remarkably clear-sighted in their public commitments. They were, as Immanuel Kant would say, ethically sound individuals: An ethically sound person being one who sees the given situation in light of the universal, rather than what is safe or profitable for oneself.

Fourth, which follows from the third, their writings have undying significance. What Shakespeare said about Cleopatra—no doubt with willful and partisan exaggeration—is truer about their writings: Age cannot wither nor custom stale their infinity variety. Or relevance; we may add. Journalism of the sort they practised added enduring value to life. Their work was characterised not only by an astonishing sense of fact and history, but also sublimity of imagination, nobility of spirit and a spirit of fortitude that lend eloquent clarity to every word they wrote.

We still turn to their writings! In comparison, a report or an article by any journalist or columnist today will not be remembered tomorrow. The shelf life of journalistic artifacts is woefully short. This fleeting ephemerality is not wholly a result of the ever-increasing obsolescence that the spirit of the present age has embraced, described tongue-in-cheek by Alvin Toffler as ‘future shock’. Journalistic exercises now resemble paper cups. Used once, they are discarded and forgotten, and not even recycled.