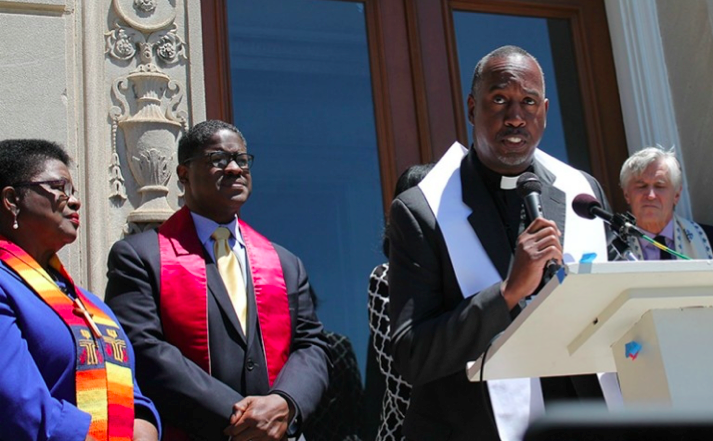 The Rev. Jimmie R. Hawkins speaks with other faith leaders at a press conference responding to the Trump administration's policies in Washington, D.C., on May 15, 2017. (Ray Chen/Office of Public Witness, PC[USA])

(Note: ‘Black Americans Matter’ is a permanent organization that acts like a thorn in the flesh of all White Americans, especially after the advent of president Trump. Now that this discrimination is more widespread and publicly felt among all sections of black community belonging even to various churches, they are resorting to various types of public demonstration to get their legitimate rights being snatched by the emboldened white supremists. The underlying principle is that ‘only the crying child gets the milk.’

Now that the ‘Obama Care’ is scraped the poor sections, especially of the aged and sick are feeling the heat. To get their rights through persuation, the best say is to meet the President personally and explain matters to him. So an ecumenical group of clergy in particular are requesting for such an opportunity. It is hoped they get an audience with the president and things will be settled in fvour of the needy. james kottoor, editor)

WASHINGTON: Black clergy, standing in the shadow of the U.S. Capitol, declared that President Donald Trump is not living up to his promise of being the “greatest champion” for the nation’s African-Americans.

At a news conference on May 15 in front of the United Methodist Building, leaders of congregations and denominations called on fellow African-Americans to speak up and urged Congress to vote down proposed plans by the new administration that they believe help the rich and hurt the sick and the poor.

The Rev. Barbara Williams-Skinner, co-chair of the National African American Clergy Network, cited proposed budget plans that will hinder the progress of children in public and charter schools and Justice Department plans that would especially put African-Americans at risk of stricter mandatory sentences.

“The very survival of fellow Americans depends on members of Congress and those in the administration exercising the backbone that is supposed to be part of their leadership,” she said.The church officials countered Trump’s campaign question — “What do you have to lose?” — to African-Americans.

“We are indeed in trouble, we are indeed losing,” said the Rev. Leslie Copeland-Tune, director of the Ecumenical Poverty Institute, who criticized the administration’s plans to cut nutrition programs for the poor.

“Every statistic shows that these policies will negatively impact African-Americans, poor people, the elderly and the most vulnerable among us. But we refuse to be silent. These policies are not OK.”

The Rev. Jimmie Hawkins, executive director of the Presbyterian Church (USA)’s Office of Public Witness, said the black clergy would like to meet with Trump and discuss ways to improve job opportunities, protect voting rights and work to reduce racial divisions in the nation.

And Hawkins had one more request of the president:“Stop tweeting,” he said. “Brother, get yourself a good night’s sleep. And if you can’t stop, tweet some good news for the country. We could sure use it.”