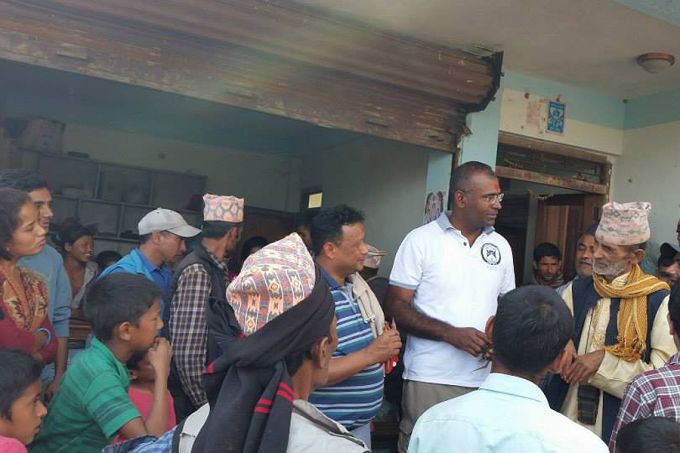 By John Pontifex (CNA)Kathmandu, Nepal, (Aid to the Church in Need).- Nepal’s bishop has given a graphic account of the country’s catastrophic April 25 earthquake, describing how he was lucky to survive.

In a message to international Catholic charity Aid to the Church in Need, Bishop Paul Simick, the Vicar Apostolic of Nepal, said he “saw houses falling like a pack of cards,” and that people “were running in all directions to save their lives.”

“It was a very, very frightening scene … I myself had to literally run to save my life.”

He continued: “Repeated aftershocks – just now there was one [and] I had to run away from my office – have made people frightened so they have left their houses and pitched tarpaulin tents on the streets and open fields.”

With more than 5,000 confirmed deaths, the bishop added that local radio reports had predicted a rise in the death toll as more bodies are recovered. “I saw animals killed by falling cow sheds and stone walls,” he added. “I saw the dry landslides after the shake all over the hills where I was.”

The bishop described the devastating impact of the earthquake on Nepal’s small Catholic community, numbering just 10,000 faithful.  “Here in Kathmandu city, many Catholic families have cracks in their houses or major damage … many of our churches, schools, convents and other institutions have developed precarious cracks.”

Bishop Simick stressed the problems of trying to assess the situation on the ground, describing the crippling impact of communications breakdown, impassable roads, no domestic flights, and entire communities still cut off from any help.

Reporting on the suffering of Catholic communities, he described how some faithful had lost their lives in a mission station which takes three days by foot to reach from the capital. He said that on Monday “one helicopter went to see the place and victims, but because of bad weather it could not land and saw nothing.”

The bishop added: “I would also like to request your prayer support for the victims’ families who have lost loved ones, those who are still missing loved ones and those who are seriously injured.”

John Pontifex is a senior journalist for Aid to the Church in Need, an international Catholic charity under the guidance of the Holy See, providing assistance to the suffering and persecuted Church in more than 140 countries.