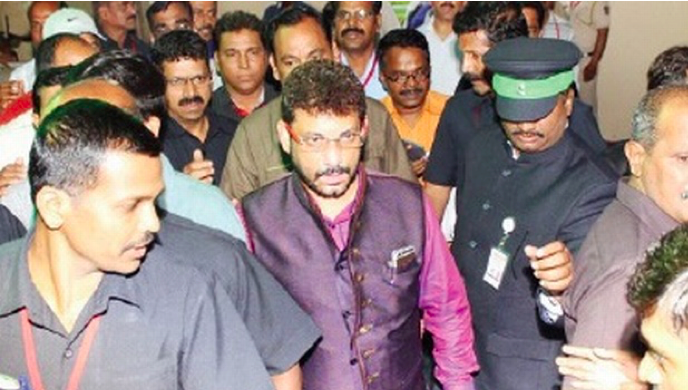 MIM legislator Pathan comes out of the Maharashtra Assembly

(Note: Sorabjee is a former Attorney General of India, a legal luminary and a great thinker and  therefore he deserves to be listened  to. What is vital for all of us Tolerance, that  attitude and mindset to live and let live, holding on to the principle: “Unity in necessary things, diversity in unnecessary things and charity in all things.”Memorize his quotes for daily living: “Bernard Shaw’s said “patriotism is a pernicious, psychopathic form of idiocy”, and Dr Samuel Johnson’s was a scathing remark that “patriotism is the last refuge of a

scoundrel”.Again listen: “Our tradition teachers tolerance; our philosophy preaches tolerance; our Constitution practices tolerance; let us not dilute it.” I plead with our readers to memorise these pearls of wisdom so that they become a powerful driving force for  upright daily living. james kottoor, editor)

New fangled notions of nationalism and patriotism have recently erupted. In substance, they equate patriotism with the chanting of certain words with the clear implication that those who do not do so are anti-national and unpatriotic. It must be remembered that nationalism is a mindset arising from spontaneous feelings of genuine affection for the country and its people. It cannot be manufactured by recitation of certain verses. The case of AIMIM MLA Waris Pathan raises crucial issues. Pathan refused to say ‘Bharat Mata ki Jai’ although he was ready and willing to say ‘Jai Hind’. He was nonetheless suspended from the Maharashtra Legislative Assembly for his refusal. Apparently, Pathan’s refusal was on account of his belief that he could not be dictated to, much less coerced, say ‘Bharat Mata ki Jai’. Prima facie, Pathan’s suspension appears disproportionate and unjustified, particularly because of his willingness to say Jai Hind. Our Supreme Court in its landmark judgment in Bijoe Emmanuel v. State of Kerala upheld the right of students belonging to the sect of Jehova’s Witnesses not to sing the National Anthem whilst standing respectfully when it was sung. That judgment was a clear endorsement of tolerance. Justice Chinnappa Reddy, who authored the judgment, declared in ringing tones: “Our tradition teachers tolerance; our philosophy preaches tolerance; our Constitution practices tolerance; let us not dilute it.” If patriotism lies in mere chanting of certain words, several diehard opponents of the government of the day could well qualify as patriots. This brings to mind George Bernard Shaw’s statement that “patriotism is a pernicious, psychopathic form of idiocy”, and Dr Samuel Johnson’s scathing remark that “patriotism is the last refuge of a scoundrel”.

Pervasive Intolerance: Some sections in our society are demanding that Waris Pathan should also be ‘expelled from society’. This is a pernicious form of intolerance. Regrettably, the intolerance virus has infected our neighbouring country, Pakistan. Pakistani skipper Shahid Afridi, who is alleged to have said Pakistan cricketers are more loved in India than in their own country, has been accused of treason. Court proceedings have been initiated in the Lahore High Court against the skipper, demanding his prosecution for the offence of treason. Afridi’s statement was obviously a goodwill gesture and should be taken in the right cricketing spirit. The pressing need of our time is to eliminate the virus of intolerance wherever it erupts.

Myths about our Supreme Court: One myth about our Supreme Court is that judges enjoy a life of leisure, working only five days in a week for four and a half hours. The fact is that our Supreme Court judges are the most pressed public functionaries. Their weekends are not spent in enjoying cultural events and musical concerts but wading through numerous SLPs and writ petitions which are listed for admission. Consider the range of matters of which the court has taken cognisance. (a) Examining whether towers put up by mobile phone service providers in residential areas are a health hazard to humans and animals because of the ill-effects of electro-magnetic radiation; (b) The need for setting up hospitals exclusively for treatment of HIV-infected patients in every district; (c) Issues arising out of its previous order permitting government advertisements to feature only the President, Prime Minister and Chief Justice of India. Recently, the court in a three-page order revised its previous order and stated that the exception carved out was to be extended also to the governors and chief ministers of the states.

It is intriguing that the Supreme Court has agreed to expeditiously hear a PIL for banning Sardar jokes. There is nothing exceptional about Sardar jokes. Khushwant Singh, who was a proud Sikh, had a fund of Sardar jokes which he narrated with gusto to the merriment of his Sardar and non-Sardar friends. There are Irish jokes, Polish jokes and Parsi Bawaji jokes which have lot of spice in them. For God’s sake, let us not banish our sense of humour. A dash of humour is welcome and can provide a wholesome and much-needed relief at times, especially when intolerance is dangerously on the rise.