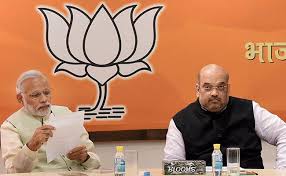 (Note: Times of India (TOI) gives two editorials on cabinet reshuffle: one before reshuffle giving advise and one on 6th evaluating the reshuffle made.)

How does the newly formed cabinet of 90 look like against his promise of minimum governance? 90 Council of ministers, for a minimum governance? Manmohan Singh also had  minimum of 90. In picking up 19 new faces did Modi pick up light weights or heavy weights, preferring people with merit, not looks, promoting quality, or class and caste preferences? It was  both, more cosmetical than substantial.He did drop some non-performing ones like Smriti Irani. Political considerations and electoral gains dictated most new faces because he gave more ministers to states going for election soon, to UP which now has 16 because it is going to pols next year. The unwritten law is, one who rule UP rules India. Through the candidates selected, Modi is trying to project himself as a PM who is pro-village, pro-poor and pro-development. All don’t fit that image since there are many crore-pathies even among dalit candidates giving the impression politics is winning over performance and age overf youth. Because 14 of the new 19 are above 56 years old while 65% of the population they govern is below 35 years of age, which is a terrible mismatch.

The induction of 19 new and relatively unknown faces in the Modi government’s much awaited second Cabinet reshuffle signals change only at the margins. The changes appear cosmetic in nature, with Prime Minister Narendra Modi shying away from dropping non-performing Cabinet ministers. The induction of three new ministers each from election-bound states of Uttar Pradesh and Gujarat is a sign of Modi’s priority. UP now has a whopping 16 ministers in team Modi.

Some of the new faces like Mahendra Nath Pandey, Ramesh Jigajinagi, Purshotam Rupala and Jasvantsinh Bhabhor have served as ministers in states, while Vijay Goel and Faggan Singh Kulaste have served in the Union council of ministers earlier. The others belong to varied backgrounds ranging from P P Chaudhary being a senior lawyer to well-known doctor, Subhash Ram Rao Bhamre, to former bureaucrat Arjun Ram Meghwal, and environmental activist cum author Anil Madhav Dave. The plan is to use their services strategically. The PM is betting that the new-look team will do justice to his theme of gaon, garib aur vikas (village, poor and development).

Though five ministers have been dropped, the strength of the council of ministers has burgeoned to 80. This is just two short of the prescribed limit of 82 and akin to Modi’s predecessor, Manmohan Singh, who also had 80 ministers. These are unwieldy numbers that prevent the rationalisation of ministries and reinforce the impression of politics rather than performance being in command. Apart from Apna Dal’s Anupriya Patel and Republican Party’s Ramdas Athawale, other ministers inducted belong to BJP and none of the other allies have been given any berth. This has already created discontent amongst NDA partners. Disgruntled ally Shiv Sena has termed the expansion as a reflection of new faces from BJP, not NDA.

For a young country the expansion seems to favour the older generation, with 14 of the new ministers being over 57 years of age. Modi had the perfect platform to promote relatively young ministers who have performed well – like Piyush Goyal and Jayant Sinha – to Cabinet rank, but that didn’t happen. UPA too had lost the opportunity when it failed to push youngsters and give them a chance to perform as Cabinet ministers. In a country like India where 65% of the population is below 35 years of age, such moves open up a wide gap between governors and governed.

Governance, rather than caste equations, must be top priority in cabinet reshuffle

More than a month after the National Democratic Alliance celebrated two years in power, a second cabinet reshuffle is impending. This provides Prime Minister Narendra Modi with a platform to drop non-performing ministers and focus on governance. He should promote good performers in his council of ministers for faster and better delivery on development goals. Giving more representation to youth will also re-energise his government.

It will be unfortunate if political considerations dominate this rejig, with elections due in Uttarakhand, Punjab, Uttar Pradesh and Gujarat next year. Reports suggest that UP is likely to get the highest representation. Winning India’s most populous state is vital for BJP in the run-up to the 2019 general election. But Modi the politician needs to strike a balance with Modi the administrator. Considerations of short-term politics alone must not take precedence. If Modi wants to blaze a new trail, he must transcend the customary narrative of caste and ethnic equations dominating reshuffles of the past. Neither should loyalty to party or RSS be the dominant criterion. Leadership, particularly of a large and diverse country like India, also means the ability to delegate to talented and competent people. The accompanying lead opinion essay points to the hazards of running a government with a talent deficit.

The recently held assembly elections in five states have proven that mindset of the electorate is fast changing. Increased levels of education and awareness have transformed voters and they want delivery on development promises. Nobody understands that better than Modi, who held a five-hour review meeting with his council of ministers last week. The government should not get side-tracked from governance, which will have a direct bearing on Modi’s fortunes and his popularity in the long run. People need jobs, physical and social security; not community representation in the cabinet