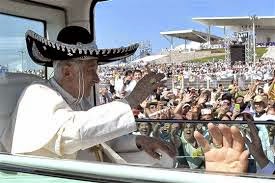 (Note: “While Indian Catholics are supporting the Fundamentalists — and in the bargain losing their credibility and, most importantly, their civility and decency — this is what is happening. And anecdotally, this is happening in India also. Just as the Portuguese tried to annihilate authentic Indian Christianity for political and racist reasons, the fundamentalists are trying to do the same in India — and elsewhere,” writes an independent observer. In the light of happenings in Latin America, we understand better the all-inclusive or left leaning  approach, as come call it, of  Pope Francis to come to grips with harsh realities of Catholic Family life everywhere.  James Kottoor)

These are heady days for Roman Catholics in Latin America. For the first time, one of their own is serving as pope, providing a visible reminder of the importance the region plays in the global church.

But after a century in which nearly all Latin Americans identified as Catholic, the church’s claim on the region is lessening.
A sweeping new survey, conducted by the Pew Research Center, finds that 69 percent of Latin American adults say they are Catholic, down from an estimated 90 percent for much of the 20th century. The decline appears to have accelerated recently: Eight-four percent of those surveyed said they were raised Catholic, meaning there has been a 15-percentage-point drop-off in one generation.
The findings are not a total surprise — it has been evident for some time that evangelical, and particularly Pentecostal, churches are growing in Latin America, generally at the expense of Catholicism. But the Pew study, which was conducted by in-person interviews with 30,000 adults in 18 countries and Puerto Rico, provides significant evidence for the trend, and shows that it is both broad and rapid.
Latin America “in most people’s minds is synonymous with Catholicism, but the strong association has eroded,” said Neha Sahgal, a senior researcher at Pew. “And it’s a consistent trend across the region — it’s not just a Central American phenomenon.”

[nextpage title=”second page” ]
Latin America remains home to an estimated 40 percent of the planet’s Catholic population. But the survey finds that 19 percent of Latin Americans now describe themselves as Protestants. And Protestant churches in Latin America are filled with former Catholics — in Colombia, 84 percent of Protestants say they were baptized as Catholics.
Latin Americans who converted from Catholicism to Protestantism most often said they did so because they were seeking a more personal connection with God.
The change has political and religious implications. According to the survey, Protestants in Latin America are more religious and more conservative than Catholics: The Protestants pray more, go to services more often and are more likely to tithe. They are also more strongly opposed to same-sex marriage.
The religiosity gap is especially pronounced in Venezuela, where the leader Hugo Chávez, who died last year, was long at odds with the Catholic bishops, and where the Catholic Church has been upset with a version of the Lord’s Prayer modified to praise him. In Venezuela, just 10 percent of Catholics say they pray daily, attend services weekly and consider religion very important, compared with 49 percent of Protestants.
The survey finds varying attitudes across the region toward Catholic church teachings. In most countries, a majority of Catholics say the church should allow contraceptive use and divorce. A majority of Catholics in Brazil, Chile, Puerto Rico and Uruguay support ordaining women as priests and allowing priests to marry, but there is strong support for maintaining the all-male, celibate priesthood in other areas, particularly in El Salvador, Guatemala and Honduras.
[/nextpage]
[nextpage title=”third page” ]
The decline in Latin American Catholics has parallels in the United States, where significant numbers of both Hispanic and non-Hispanic residents were raised Catholic but have left the church. But in the United States, 18 percent of American Hispanics say they are religiously unaffiliated, compared with 8 percent of Latin Americans.
Among the other findings: The most Catholic country among those measured in the region is Paraguay, where 89 percent of adults are Catholic, and the least is Uruguay, where 42 percent are Catholic. Pew describes Uruguay as “far and away Latin America’s most secular country,” with 37 percent of the population religiously unaffiliated, after more than a century of secularization fueled by state policy.
Some indigenous ideas, such as belief in the “evil eye,” are widespread (held by at least one-third in each country). Throughout the region, practices like communicating with spirits, consulting with traditional healers and participating in spiritual cleansing ceremonies are more common among Catholics than Protestants. In Panama, indigenous beliefs and practices are particularly common.
The interviews were conducted from October 2013 to February 2014, and covered every Spanish or Portuguese-speaking country in Latin America and the Caribbean, with the exception of Cuba, where, Pew said, “fieldwork constraints and sensitivities related to polling about religion” precluded research. In each country, the margin of sampling error is three or four percentage points.
The main findings are unlikely to startle Pope Francis, who built strong relationships with evangelicals in his native Argentina. But the study is a reminder that, even as Europe and North America become more secular, the Catholic Church also faces significant challenges in some of the regions of the developing world it has long considered to be its future.
[/nextpage]