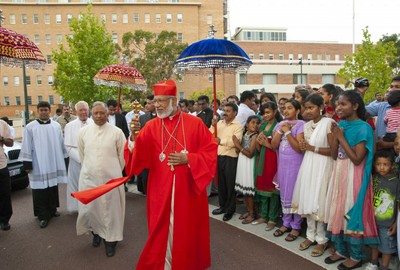 Syro-Malabar dioceses outside the state cater to mostly poor Catholics.

Kochi: UCAN. The synod of the Syro-Malabar Church has urged its bishops based in Kerala to visit mission dioceses in northern India to help them more closely follow Christ, who befriended the poor.
"One step to follow Christ who befriended the poor is to see and understand the mission work," the synod said according to an official statement.
The Syro-Malabar Church, based in Kerala, is considered politically and socially powerful in the southern state, but its dioceses outside the state cater to mostly poor Catholics, who in most cases form less than one percent of local populations.
The synod also invited its Catholics, most of them living in Kerala to visit the missions and understand the social and economic poverty of Catholics in the mission areas of northern India. Nine of the Church's 26 dioceses are outside Kerala.
The Church plans to celebrate the silver jubilee of its Sui Juris (self governing) status in 2017 with several programs, ensuring larger lay participation across India.
The synod will open next year the silver jubilee year of the Church becoming a sui juris archiepiscopal Church in 1992, the statement said.