Pope: When Jesus’ words are hard to hear, you need faith to stay 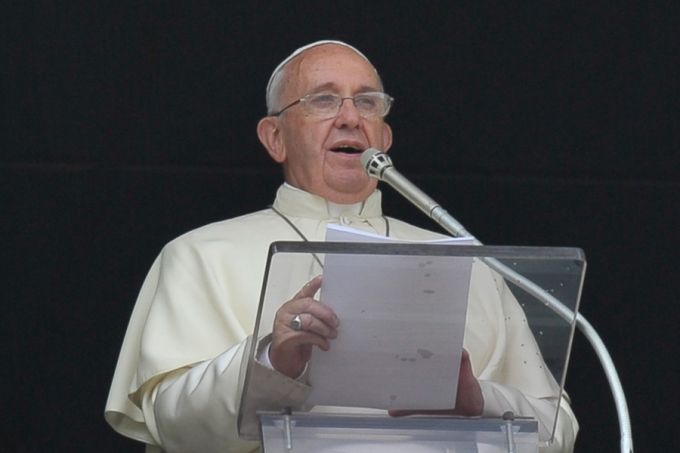 By Ann Schneible. Vatican City, Aug 23, 2015 / 10:21 am (CNA/EWTN News).- Those who turn away from the “uncomfortable” teaching on Jesus being the Bread of Life, Pope Francis said during his weekly Sunday Angelus address, do so not because of a lack of understanding, but a lack of faith.

“The true cause of misunderstanding (Jesus') words is a lack of faith,” the pontiff stressed, speaking ahead of the Angelus from the papal palace to the crowds in St. Peter's Square.

“All that we have in the world does not satiate our hunger of the infinite. We need Jesus, to be with him, to be nourished at his table, with his words of eternal life! To believe in Jesus means to put him at the center, the sense of our life.”

Pope Francis centered his Aug. 23 address on the day's Gospel from John, in which Jesus pronounces himself to be the Bread of Life.

Reflecting on the scene, which follows the multiplication of the loaves and fishes, the pontiff observed that the disciples' “great enthusiasm” dampens when Jesus says he has come that his flesh and blood might be food and drink. The Gospel recounts that upon hearing these words many of the disciples left and returned to their old lives.

These disciples who turned away did not understand Jesus' mission as the Messiah, and found this language disturbing, the Pope said. However, although they failed to accept Christ's words, they nonetheless understood what he was saying.

“In fact, they understood Jesus' proposition well,” Pope Francis said: “so well that they did not want to hear it, since it is a proposition which sends their mentality into crisis.”

Jesus' words always bring about a crisis in us, he continued, but he gives us the “key” for overcoming the “discomfort” his teaching.

There are three elements to this “key,” the Holy Father said: first, a recognition of Jesus' divine origins; second, that his words could only be understood “through the action of the Holy Spirit”; and finally, that the absence of faith is the true cause of being unable to understand Jesus' words.

Pope Francis said that, although he was deserted by the disciples after making these statements, Jesus nonetheless “does not retract or soften his words,” but rather “forces us to make a clear choice: to stay with him or to separate ourselves from him.”

The Gospel reading then recounts Jesus turning to the twelve Apostles, asking them if they will leave along with the other disciples following this teaching. In response, St. Peter says: “Lord, to whom shall we go? You have the words of eternal life.”

Observing that Peter did not say “where” but “to whom shall we go,” Pope Francis said “the fundamental problem is not leaving and abandoning the work that has begun, but it is to whom we go.”
“From Peter's question, we understand that faithfulness to God is a question of fidelity to a person, with whom we are joined in walking together along the same road. And this person is Jesus.”
This relationship with Jesus, based on “true faith and love,” does not entail being “enchained,” but rather “profoundly free,” the Pope added.

“Each one of us can ask: who is Jesus for me? Is he a name, an idea, merely a historic figure? Or, is he really that person who loves me, who has given his life for me, and journeys with me?”
Pope Francis challenged those present to seek to know Jesus through his Word, through daily reading of the Gospel, adding that the more time we spend with Him the greater our desire to remain.

He then led the crowds in a moment of silence, in which he invited them to reflect on the question: “Who is Jesus for me?”
Concluding his Angelus address, the pontiff appealed to Mary to help us always “to go to Jesus to experience the freedom which he offers, and allow him to cleanse once again our choices from the worldly crusts, and from fear.”