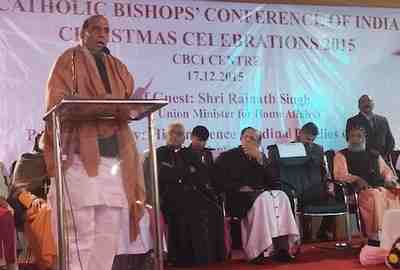 New Delhi (UCAN) India's government has assured the country's Christian community of justice and protection against persecution.
"We have always been with the Christian community and will always remain with them. There should be no confusion regarding this," said Rajnath Singh, federal home minister, and second-in-command to India's prime minister.
Singh was speaking at a Christmas dinner organized by the Catholic Bishops' Conference of India (CBCI) in New Delhi Dec. 17.
Speaking about recent church attacks in the national capital, he said the incidents could be a conspiracy or a coincidence.
"All the attacks happened just before the Delhi assembly elections and now they have suddenly stopped. I am not able to understand this," he said.
Church attacks began with the burning of St. Sebastian Church in New Delhi on Nov. 30, 2014, followed by a two-months series of incidents of vandalism and possible arson.
Since the ruling pro-Hindu Bharatiya Janata Party assumed power in May 2014, the party has been accused of ignoring India's minority communities. Christian leaders have blamed these attacks on religious hardliners, who operate with the tacit approval of the government.
Singh said that there might be some people trying to spread hate among communities but "the religion to which I belong preaches love and peace."
He said Indian traditions and cultures are similar to Christianity to a large extent.
Noting that Christianity first arrived in India in the first century, he said, "India has always been accommodative and inclusive. This is the character of India."
Cardinals Oswald Gracias of Bombay, Baselios Cleemis Thottunkal of Trivandrum and Telesphore Placidus Toppo of Ranchi, various Indian bishops and officials from the Vatican embassy attended the dinner. Members of parliament and several other foreign ambassadors also were present.
Cardinal Cleemis, CBCI president, said that despite religious and cultural tensions in India "there is a common ground on which human society can build its dreams and aspirations, and that is love."
But he also called on the government to take "all efforts to keep its citizens in peace and tranquility."
He said anxieties felt by Indians, particularly ethnic and religious minorities, have to be taken seriously by its government in order to promote peace, joy and justice.
Source: UCAN