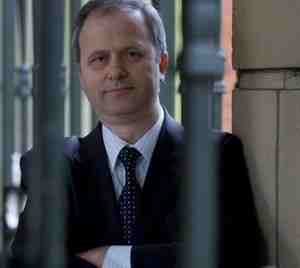 Story By: C.M. Paul (Matters India) Birmingham — Dr Gëzim Alpion, Professor of Sociology at the University of Birmingham, UK, who has been tirelessly campaigning for the canonization of Mother Teresa for two years, welcomed the news of mother Teresa’s sainthood.

Speaking to Matters India from Birmingham university he said, “I hope the Vatican has learned the lesson from the Monica Basra debacle. The Holy See is showing signs that is it trying to adapt to modernity, although still at a rather slow pace. Will a time come when its servants will no longer need to ‘perform’ miracles to be acknowledged for their service and dedication to this traditional institution? Perhaps, yes, but not in the foreseeable future.”

Dr Alpion quickly added, “I would have preferred that Mother Teresa was the first such ‘new’ saint. Nevertheless, the fact that the Church finally decided to canonize Mother Teresa,irrespective of her unique spiritual aridity that characterised her throughout her years as a devoted servant of the Church, an aridity which made her such a ‘controversial’ missionary, is another welcoming sign that even this most conservative of institutions is moving in the right direction.”

Profesor Alpion is the author of a number of controversial studies on Mother Teresa,including the well-known book ‘Mother Teresa: Saint or Celebrity?’, published by Routledge in London and New York in 2007, followed by an Italian edition by Salerno Editrice in Rome a year later.

He is currently working on a new book on the Albanian-born saint entitled ‘Rooting Mother Teresa’. In this new monograph, which will be ready for publication by the time his compatriot is canonized in Rome next year, he uncovers some fascinating new details about Mother Teresa’s family and the first 18 years she spent in her native Skopje.

Alpion contends in the forthcoming monograph that Mother Teresa’s welcoming, tolerant,forgiving and inclusive Christianity, which made her some strong opponents in the Indian Church as well as in the Vatican during her lifetime as much as since her death in 1997, can be better understood if her life and work are grounded in her pelasgo-illyrian roots which none of her numerous biographers to date has explored.

Failure to see Mother Tetesa’s work, legacy and her doubts in God in the context of her roots, of her nation, one of the oldest in Europe as well one of the first to accept Christianity, is one of the reasons why Mother Teresa often seems or is depicted as a religious freak not only by her devotees as well as her detractors like Hitches, Greer or Dawkins who never made a serious attempt to understand this iconic modern complex personality.

After the publications of Prof. Alpion’s new book next year, for which he has been working and travelling tirelessly around the world, even some of the best biographies and hagiographies on her will be rather outdated, some of them significantly so.