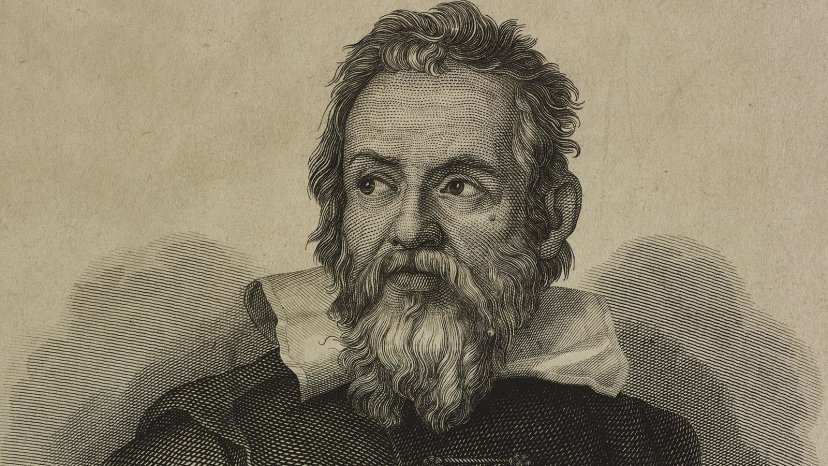 Cover photo:  A portrait of Galileo Galilei (1564-1642), Italian physicist, philosopher, astronomer and mathematician, in an engraving by Spagnoli. DEA/ICAS94/GETTY IMAGES

The following article has been recommended by Mr Varghese Pamplanil for the benefit of readers who have a scientific bend of mind.

Today, Italian astronomer, physicist and author Galileo Galilei, who lived from 1564 to 1642, might be most famous for having been put on trial for heresy by the Roman Inquisition in 1633. That event has come to symbolize the conflict between adherence to religious dogma and the intellectual freedom required by science.

Galileo's trouble with authorities actually stemmed not from his own work, but from his advocacy of Polish astronomer Nicolaus Copernicus' heliocentric theory that the sun, not the Earth, was the object around which the planets revolved. Galileo was forced to renounce those views to avoid torture and execution and had to spend the last years of his life under house arrest. Even so, Galileo ultimately won the argument. Three-and-a-half centuries later, Pope John Paul II gave a speech in which he not only said that the church's persecution of Galileo had been a mistake, but also praised him as a brilliant mind who "practically invented the experimental method."

But that brouhaha isn't the most important thing about Galileo, a scientific giant whose discoveries forever changed humans' view of both the cosmos and the physical world in which we live, and helped establish the way in which modern scientists do science. He also became one of the first celebrity scientist-authors, whose 1610 book "Starry Messenger" became a sensation.

"Galileo is an interesting example of a versatile Renaissance mind," explains Paula Findlen, the Ubaldo PIerotti Professor of Italian history and co-director of the Patrick Suppes Center for the History and Philosophy of Science at Stanford University, via email. "He loves literature, art and music as well as science. He knows how to draw and he certainly knows how to write with eloquence. He's fascinated with how things work and visits artisans to know more. I see him as one of the culminating products of the Renaissance living in the age of the Reformation. Yet what he does with his knowledge launches a new age of science and observation."

Galileo was born in Pisa, Italy in 1564, one of six or seven children of a musician named Vincenzo Galilei, according to Rice University's Galileo Project website. In Galileo's youth, his family moved to Florence.

After getting his early education at a monastery, Galileo was sent by his father in 1581 to the University of Pisa, where he was supposed to earn a medical degree, as this biographical profile details. But Galileo didn't have much interest in healing the human body. Instead, he was curious about the world around him, and started physics experiments — some of them challenging the views of the classical Greek philosopher Aristotle. In 1585, he left the university without earning a degree, and began teaching mathematics, another of his interests. Eventually, his reputation grew so much that in 1589, he was invited back to the university to head the math department.

In 1592, Galileo moved to Venice and took a better-paying post at the University of Padua, where he spent the next 18 years teaching math and astronomy. During that time, he began a relationship with a woman named Marina Gamba, with whom he eventually had two daughters and a son. 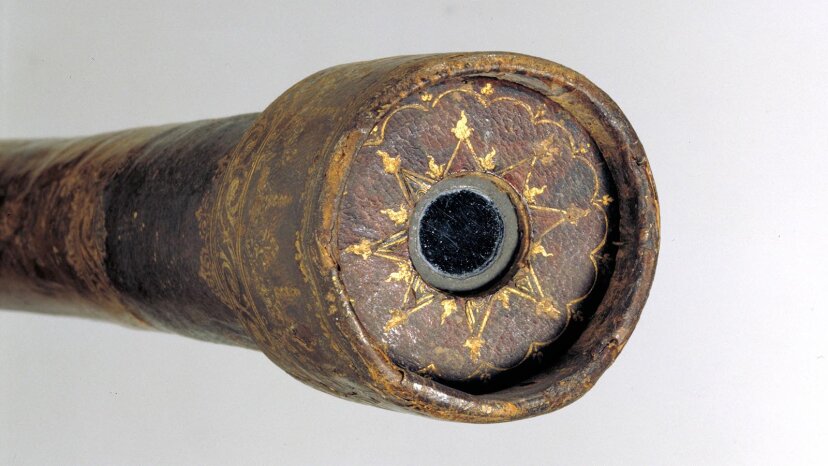 Galileo's telescope, which he made in 1610, from the collection of the Museo Galileo in Florence, Italy. HERITAGE IMAGES/GETTY IMAGES

In 1609, while still at the university, Galileo heard about a Dutchman who had visited Venice and shown off a new invention, the telescope. Galileo decided to make his own, better version, and taught himself how to grind lenses to an even higher magnification.

"He was an excellent craftsman who read descriptions of the instrument and made the most powerful telescopes at the time," Alan Hirshfeld writes in an email. He's a physics professor and director of the UMass Dartmouth Observatory, and author of the 2014 book "Starlight Detectives: How Astronomers, Inventors, and Eccentrics Discovered the Modern Universe."

"[Galileo] could see what others could not, and therefore his observations were groundbreaking," Hirshfeld explains.

Perhaps the most important of Galileo's astronomical discoveries were his revelations about the moon's topography, and how its mountains, valleys and plains are comparable to those on Earth. "It's a material world in space, not some special celestial body made of divine substance," Hirshfeld says.

Galileo's discovery of Jupiter's moons was another breakthrough. As Hirshfeld explains, he also found that the moons "keep up with Jupiter as it moves, whether it moves around the Earth or around the sun, depending on one's beliefs, but Jupiter's moons do not get left behind as critics of Copernicus claimed our moon would if Earth were moving around the sun. Jupiter and its moons provide a model of what the solar system is like: small bodies orbiting the larger body."

Galileo also observed that the Milky Way galaxy consists of stars, most of which are too faint to be seen individually by unassisted human eyes. Thanks to him, humans learned that "There are many more stars than previously believed, and our cosmos might be far larger than we thought," Hirshfeld says.

He also discovered that the planet Venus had changing crescent phases.

"The observation that Venus went through a full cycle of phases, from new to crescent to full and back was totally incompatible with the geocentric model of the universe," says Larry Marschall, an emeritus professor of physics at Gettysburg College, in an email. "It could only be explained if Venus went around the sun in an orbit that was smaller than the Earth's orbit around the sun — in other words the Copernican model." 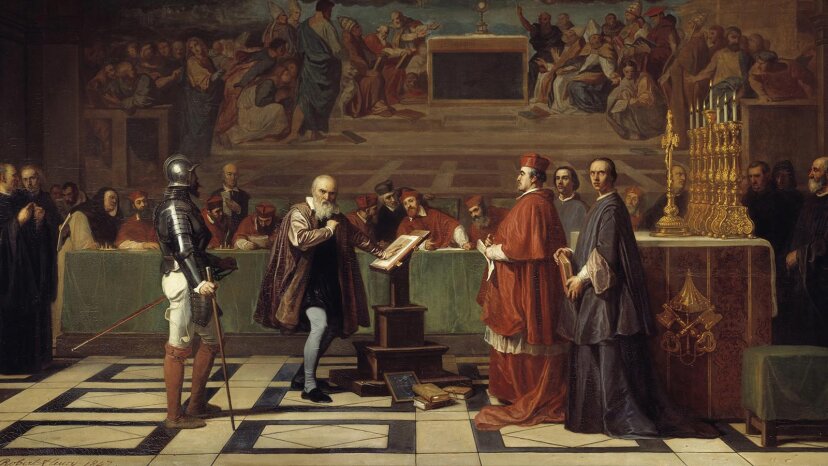 Galileo defended himself before the Holy Office in the Vatican in 1632 after he was condemned by the Tribunal of the Inquisition for having defended the theories of Copernicus. Painting by Joseph Nicolas Robert-Fleury, 1847, Louvre Museum, Paris. JOSSE/LEEMAGE/GETTY IMAGES

A Physicist Who Changed Science

Though his astronomical discoveries made him a scientific celebrity, Galileo also made important discoveries in physics, going back to his early years at the University of Pisa.

For example, Galileo disproved the Greek philosopher Aristotle's belief that heavier objects fall faster than lighter ones, and showed instead that objects tend to fall at the same speed no matter what their weight or shape, which became known as the law of falling bodies. In legend, Galileo accomplished this by dropping a cannon and a musket ball from the Leaning Tower of Pisa, though modern historians have cast doubt upon that story. Galileo also discovered that the time taken for a pendulum to complete one swing was independent of the length of the arc, which led him to create a design for a pendulum clock.

But his most important breakthrough may have been discovering the concept of inertia — that bodies at rest tend to remain at rest — which eventually became the first of the three laws of motion described by British physicist and mathematician Isaac Newton.

"Galileo's main contribution to physics (as opposed to astronomy) was his realization that natural horizontal motion (a ball rolling on a flat table) would be steady motion in a straight line, if you could reduce friction and air resistance to nothing, and natural vertical motion would be constant acceleration downwards," Michael Fowler, an emeritus professor of physics at the University of Virginia who has taught a course on Galileo's discoveries, writes in an email. "But Newton synthesized these observations in his laws, then, brilliantly, added the law of gravitation, explaining at one stroke everything from the apple to the solar system."

In the process, Galileo also helped to establish the way that today's scientists do science. "He fostered the paradigm of physical experiment, precise measurement and objective observation — 'Let nature speak,' as the saying goes — as opposed to logical inference based on preconceived notions about nature," Hirshfeld says. "The language of nature, he wrote, is mathematical and one must learn to understand that language."