Finally bombshell! Tsunami, not tempest in a tea-cup! To save the country, Congress needs inner-party democracy 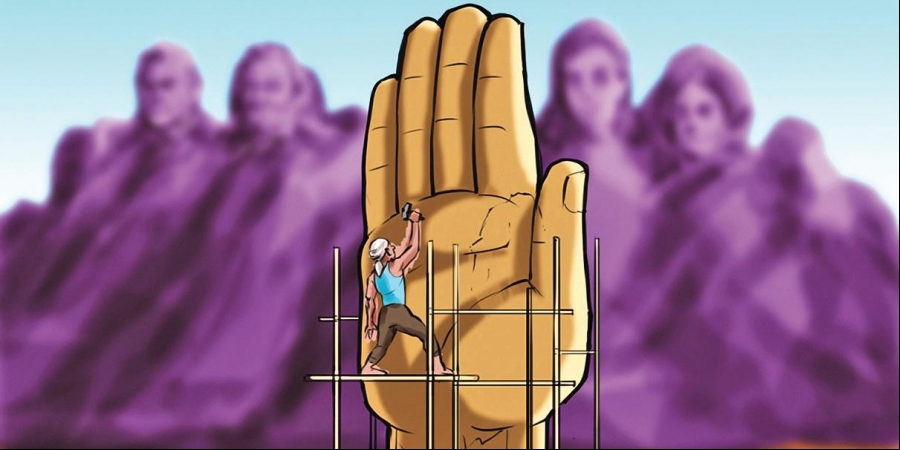 Political pundits could ascribe a hundred reasons for the rise of the BJP, including polarisation of votes. But what we often miss is its greatest strength.

Finally, finally,  a bombshell has been dropped in the Grand old Congress Party, not by youngsters or hangers-on, but by some 23 veterans like Kapil Sibal, Ghulam Nabi Azad, Anand Sharma, Ashok Chavan and Shashi Tharoor. If it doesn’t do the job of ENOUGH IS ENOUGH, as we wrote earlier, Congress is bound to vanish from the face of India.

What shocked me out of wits was the reported remark of Rahul, that the writers were "in league with the BJP!” Is he still the ‘old head on young shoulders’ or grown most immature to become ‘good for nothing’?  Then I had some admiration, now nothing but disgust,  he is worth only for the dumping ground!

What a surprise! Before the bombshell could explode, the sychophants of the “Family Glue”, more than 23 sprang up to declare it was only a ‘tempest in a teacup’. No it was a ‘tsunami’ in the  Arabian ocean! The supporters of the ‘family glue see  it as the substance of survival for the Grand old guy on his death bed. They are zyphers, unelected  zero-leaders who owe their present position for eating their daily bread to their unflinching loyalty to the family, so have everything to lose!

So beyond redemption  is the sinking old GUY, like the grand old Catholic Constantinian Indian Catholic church of over 200 bishops who won’t let go even their honorific appellations, except the now retired bishop Alex (Dias) of Port Blair!

This not to say that other parties like the BJP having a semblance of national foothold has a better record of inner-party democracy. It is worse! Writers in national dailies abound to prove it with facts and figures. If possible we shall publish, time and space permitting!

Either or to do!

Long live the ROAR of the bomb shell leading to the burial of the Grand old man of India before it start stinking to pollute the Indian atmosphere. For that the letter bombers should either join the Pawar Split group or rope in vacillating youngsters like Sachin Pilot, (not Scindia) and other cowardly reeds still surviving to join the winning faction.

No ill will to any!

Sorry Rahul baba, Priyanka (Vadra, whom you can’t swallow or spit out) and Sonia (caught between Italian and Indian moorings). This shouting is from the innocent kid in the crowd: “The king is naked!” shouting what it sees!

Time and tide wait for no man or woman! When most are in the vice-like grip of cowardly fear, victory is assured for the radical ROGUE who strikes first. Let him/her save at least a remnant of the GRAND OLD PARTY! james kottoor, editor ccv.

Please read below Anand in Indian

Express all about internal democracy!

Political pundits could ascribe a hundred reasons for the rise of the BJP, including polarisation of votes. But what we often miss is its greatest strength. The BJP has a robust internal democracy.

Any ordinary worker can dream of reaching the top, and Narendra Modi’s rise serves as an inspiration. Every position, right from the booth level to the national president, is an elected position and elections happen every three years. Contrast this to a common man joining the Indian National Congress.

What is the highest he could aspire for when every position is filled through nomination from the top?


In the pre-Independence era, Congress had the most vibrant inner-party democracy among all political parties in the world. Who can forget the historic win of Subhas Chandra Bose against Mahatma Gandhi’s nominee in 1939 in the Congress party president elections? Slowly, the first family of the party tightened its grip—from the Indira Gandhi era onwards.

The last internal elections in the Congress party was done in 1992 by Narasimha Rao when he was running a minority government at the Centre. Before him, the last internal elections had happened in 1973. In the intervening period, Indira Gandhi and her sons, Sanjay and Rajiv, held the Congress leadership. This election brought leaders such as Mamata Banerjee to the forefront. Though the grip of the family caucus continued, influential leaders such as Rajesh Pilot and Sharad Pawar continued to contest in internal elections. Pilot lost to the family nominee, Sitaram Kesri, for the party president’s post, but it was refreshing to see someone willing to contest for the position.

The rot in the Grand Old Party had started immediately after Rao’s tenure ended. However, it was only with Sonia Gandhi becoming the Supreme Leader that any semblance of internal democracy died in the party. She held multiple positions like the Congress Parliamentary Party leader, the chairperson of the UPA, the head of the election committee and the working committee, and the convener of the national advisory council during the UPA regime. She served as the Congress president for nearly two decades, the longest-held by anyone in a party since 1885. Even Jawaharlal Nehru was party president for only four years after Independence.

In 1997, Mamata left the Congress, and in 1999, there was an exodus of influential leaders such as Pawar and PA Sangma, from the Congress, thanks to the Gandhi family asserting its grip over the party once again. Many state-level leaders left the party in the subsequent years as the Congress sunk once again to nomination method of electing its leaders at all levels. From top to bottom, they filled all the posts through nomination. As Congress General Secretary, Rahul Gandhi made some half-hearted attempts in reviving inner-party democracy in 2008. He started organisational polls in the Youth Congress, but that too ended up as a damp squib. Most contestants were elected unopposed.

A democracy needs a vibrant Opposition that can keep the government on its toes and not a party that is run like a private fiefdom. Lack of a credible Opposition will only breed complacency in the ruling circle. If one can win—whether or not one governs well—why bother to govern at all? We had seen it during the Indira Gandhi era when India became a basket case in the world, where there was no credible Opposition to the highly popular Prime Minister.

Likewise, India has no opposition party at the moment. It became clear during the lockdown when millions of hapless migrant workers were walking home for hundreds of miles. Imagine this happening a decade ago when the UPA was ruling. How would have the then Opposition reacted? Any opposition leader worth his salt would have walked along with the people. He need not start any agitation but just walking with them in solidarity, following all the social distancing norms would have made a difference. An opposition party with cadres would have made it into a mass movement, like what Jayaprakash Narayan had done during the Emergency. Instead, what we got was stale discussions in an air-conditioned studio on how to turn around economy with a former RBI Governor.

With an Opposition like this, we are looking at a single-party rule for many coming decades. One can only marvel at the way at which a party that ruled the country for almost 55 years is self-destructing itself at the altar of servility to one family. There are two choices before the Grand Old Party. If they want to survive, they should kick-start inner-party democracy from the booth level. Or they can continue like this and speed up the hara-kiri so that some other party will take its place. One way or another, India needs a strong Opposition to emerge before it is too late.