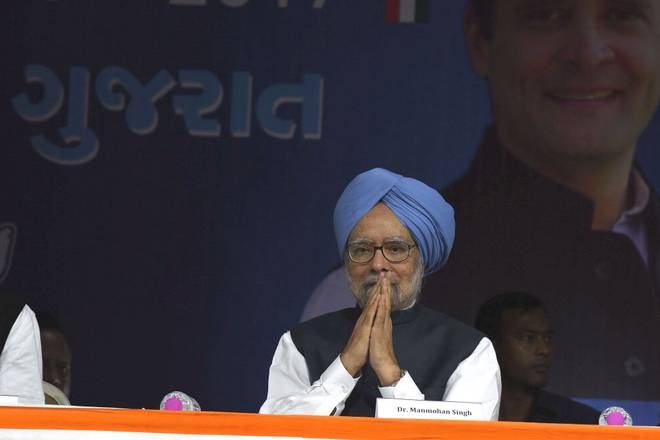 Former Prime Minister Manmohan Singh is an Indian economist and politician who served as the Prime Minister of India from 2004 to 2014.  Known to harldy vocal and whom PM Modi has so often taunted as "Maunmohan", spoke out on the fallout of Demonetisation and Goods and Services Tax (GST) which Modi has termed "Good and Simple Tax"  and which Mamata Banerjee has called "Great and Selfish Tax".

Manmohan Singh on Tuesday described November 8, the day demonetisation was announced by Prime Minister Narendra Modi last year, as a “black day for economy and democracy” and said the twin blows of demonetisation and implementation of the Goods and Services Tax (GST) were disastrous for the economy and “broke the back of businesses.” "Nowhere in the world any democracy has taken such a coercive step," he told a group of traders in Ahmedabad.

The former Prime Minister also expressed particular concern at Modi Government bracketing every criticism of his government as "anti- development" and "anti-national" – something which he has termed "Black and white." He said "Questions must be asked again and again on the soundness of policy and the lack of transparency in the government."  Can the same questions be asked of the Indian Church? Isaac Gomes, Asso. Editor, Church Citizens' Voice.

Former Prime Minister Manmohan Singh on Tuesday expressed "sadness" over the tendency to turn every important issue that affected the country's social fabric into "binaries of black and white" as he questioned the attitude of suspecting everyone who held a different view.

The reference was to labels like "anti- development" and "anti-national", often hurled at those who have voiced scepticism about decisions and projects.

"Questions must be asked again and again on the soundness of policy and the lack of transparency in the government."

It saddens me to see that every important issue that affects the lives of crores of citizens is being turned into binaries of black and white," Singh said in his address to entrepreneurs and intellectuals in Ahmedabad.

"By questioning the bullet train, does one become antidevelopment? Is everyone who questions the outcome of demonetisation or GST, a taxevader? Does questioning the drop in GDP rate make one an anti- national? This attitude of suspecting everyone to be a thief or an anti- national… the low- level rhetoric is damaging democratic discourse and has real consequences for how we relate to one another as citizens.

Political leaders must stick to the high road," Singh said.

The former Prime Minister pointed to his successor's tendency to condemn previous governments and grab the entire credit for development.

Singh responded to Prime Minister Narendra Modi's charge that Congress governments were inimical to development and had blocked over decades the construction of the Sardar Sarovar dam in Gujarat, which Modi recently inaugurated.

"The Congress has built India into a global economic powerhouse over the past 70 years. Every government builds on the foundations of the past and benefits from the efforts of the Centre," Singh told his audience in Modi's home state that votes next month.

"Pandit Nehru laid the foundation of the Sardar Sarovar dam and various Congress governments took it forward. Water poured into the Narmada main canal the year the current Prime Minister first became chief minister of Gujarat. I also remember that when the World Bank cut funding for the project, as finance minister of India, I stepped forward to provide the funding from the Centre." Singh also referred to Gujarat's poor record on tribal rights, saying: "It has been the worst performer in settling claims and distributing title deeds to adivasis. While across India deeds have been disposed of at a rate of 87 per cent, in Gujarat the figure stands a poor 44 per cent." The Gujarat government, he added, has taken a " controversial decision" to ease norms for selling forest land to industries.

"The bottom four districts in human development in Gujarat are the adivasi districts of Dahod, Dangs, Panchmahal and Banaskantha." Singh at the news conference in Ahmedabad on Tuesday. (PTI)

Do the Math, PM