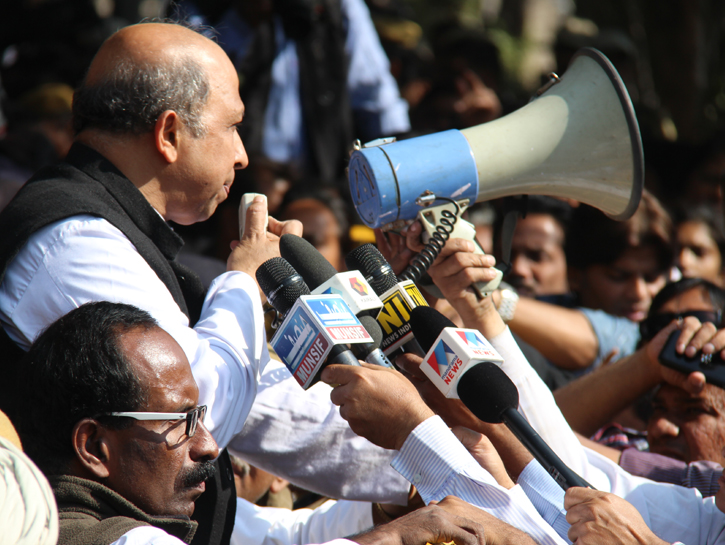 As government Intelligence agencies warn of a conspiracy against churches in the national capital, New Delhi, by non-state actors – and possibly also in other states – the lack of political will in the Prime Minister’s Office and the Union Ministry of Home Affairs has heightened the apprehensions of the minority community. There are an estimated 500 big and small churches of the Catholic, Protestant and independent denominations in the National Capital Territory which soon goes to the polls to elect its Legislative Assembly.

The threat perception comes in the wake of suspected arson which gutted the St. Sebastian’s Catholic Church in Dilshad Garden in East Delhi on 1st December.

The community, which had begun preparations for the Christmas season, was hurt and angry, staging an unprecedented protest at the Delhi Police Headquarters and sending memorandums to the Prime Minister, Mr. Narendra Modi, the Union Home Minister, Mr. Rajnath Singh, and the Lieutenant Governor, Mr. Najeeb Jung.

The Home Minister did direct the Police Commissioner, Mr. Bassi to announce a Special Investigation team to probe the crime. But community leaders fear the investigations would be little more than a sham.

The experience of government impunity in the face of religious persecution by non-State actors has left the community deeply frustrated, and angry. The incident in the national Capital, which capped a spate of violence in several parts of the country and specially in the Chhattisgarh and Madhya Pradesh provinces, perhaps also brought home to the religious and lay leadership how ill-equipped, incapacitated and perhaps even incapable they are in challenging a severe assault on their constitutional rights to freedom of religion and belief.

The protest at the headquarters of Delhi police saw very little participation by civil society. There was a near total absence of the leadership of other faiths, and especially of the majority religion, visible in the demonstration and outpouring of anguish at the burning and desecration of the church.

But it is not just a failure of inter-faith dialogue, or the reluctance of the church, cutting across denominations and ethnic differences, to integrate itself with larger civil society in defence of fundamental rights of the poor which face severe erosion under economic globalisation. The church has been all but silent as the government of Mr. Narendra Modi, who rode to power on a platform of development for an aspirational young generation and a burgeoning middle class, has drastically trimmed the small safety net that the Congress government had created through a rural employment scheme and partial subsidies in food.

This is a tremendous moral dilemma for the religious and lay leadership of the Christian community. The government is highly intolerant of dissent, and punishes Not for Profit organisations brutally if it sees their advocacy as fomenting rebellion amongst the poor, the Dalits, and the Tribals. A Church heavily dependent on the charity of western religious and social groups therefore choses to remain silent. Working amongst victims of natural disasters and other “good deeds” then become important certification with the State and the political forces in power. There is an element of desperation in its repeated plaintive recall of the work it has done in the early years of the Twentieth Century in education and health care to prove its nationalistic zeal commitment to the agenda of the state.

The community finds it incomprehensible that while Mr. Narendra Modi sees his rise to power as a public endorsement of agenda, the non-state Rashtriya Swayamsewak Sangh [RSS] and its scores of affiliated organisations see it as a vote for their plank of religious nationalism. The government, the RSS says quite unabashedly, is the fruit of their labour and the triumph of their ideology which targets Islam and Christianity not just alien to the culture, but threats to the nation. The Government has admitted in Parliament that till October this year, 90 persons have been killed and 1,688 injured in 561 incidents of religious violence.

The Sangh has also been very largely successful in putting its chosen people in the federal cabinet, the administrative machinery and in critical offices that impact everything from educational policy to human rights and national security.

The result is a quick progression of developments that seek to Hinduise both pedagogy and content of the school system on the one hand, to a rewriting of history that puts centre stage the majority faith. Lines between astrology, astronomy, mythology and science become blurred. Scientific temper, spoken of in the Constitution of India, all but becomes a dirty word even as the nation celebrates sending an unmanned mission to Mars.

It is not surprising that in Chhattisgarh, village Panchayats or local governments are enacting laws banning non-Hindu religious activity and structures, even the presence of non-Hindu religious personnel from their territory. A Public Interest Litigation in the High court of the state filed by the Christian community would be hard to implement even if the judges ruled such village laws to be unconstitutional.

The ruling could hardly be implemented, for there is no evidence of a political will to safeguard statutory guarantees, including the very basic one of Freedom of faith.