Archdiocese Sued for $500,000 Chilean cardinal sued for alleged cover-up of rape in cathedral 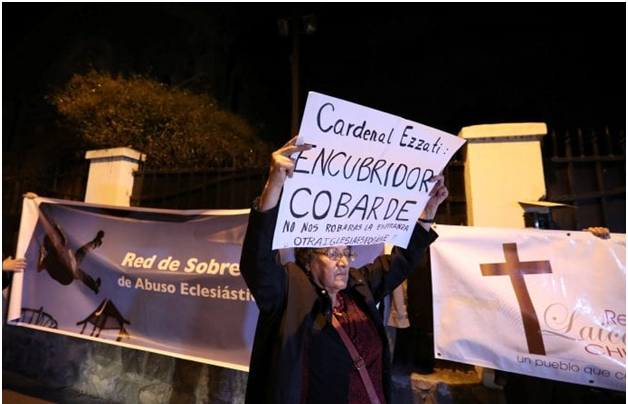 A demonstrator displays a banner during a rally against Chilean Cardinal Ricardo Ezzati over allegations he covered up sexual abuse of minors outside his residence in Santiago. The banner reads: "Cardinal Ezzati: Coward covering up! They will not steal our hope. Another church is possible" and "Survivors Network of Ecclesiastical Abuse." (Credit: CNS photo/Ivan Alvarado, Reuters).

Note: Unbelievale, but it is also impossible to convince ordinary devout Catholics, Christians, believers in Jesus how rampant and widespread and deep-rooted is  the cancer of clerical-sex engaged in by priests, bishops and cardinals in the Catholic Church today.

Even in Chile where Pope Francis has already done a thorough ‘Temple Cleansing’ new or old undetected clergy-sex cases are popping up, new ones worse than the old ones!

Are Churchmen so rotten?

Is our Catholic church this much rotten and shameless? It is rotten and stinking with sex in the higher echelons of the church, not so much at lower levels among the laity as we previously thought.

You may say again, it is happening in the west, but not in India. Don’t be fooled. India alone is the topmost in practising caste system and they do it by keeping their mouths shut to protect their clan of bishops by not making  any sexual allegations against anyone, also to cover up their own failures. The fact may be, even incest may be most common in their families. But no cardinal, bishop or priest will ever say any thing wrong about their confrere, mainly to protect and cover up each one’s own wrong doing and for happy survival.

In Chile, all Homosexuals

In any case I guess the Archdiocese of Santhiago is not short dollars to pay the $500,000 penalty suit. After all even the Syromalabar church has been  surviving on the strength of its money power.

Tink of the crores it spent and continues to spend in ever so many sex abuse cases starting from Abhaya some 26 years ago. A Franco Mulackal  will be allowed to go scot free very soon, because the God they worship is the Mammon of iniquity, the GOLDEN CALF! james kottoor, editor CCV.

ROME – Cardinal Ricardo Ezzati of Santiago, Chile, and the archdiocese he leads are being sued for $500,000 for covering up a case of rape that allegedly took place in a bedroom of the local cathedral.

In 2015, Daniel Rojas, 40 at the time, went to the cathedral looking for financial help to buy medicine for his daughter. Instead, according to Rojas, Rivera took him upstairs, through a long corridor, into a bedroom, gave him a glass of water, and soon after, Rojas said he had no control over his body.

The criminal complaint, published by Chilean media outlet Radio Bio Bio, includes a graphic description of what allegedly happened after the priest returned from the bathroom in his underwear and raped Rojas. The archdiocese found the original allegation, filed in 2015, days after it happened, to be credible.

Rojas’s partner didn’t believe him, accused him of having a gay affair, and kicked him out of the house. He tried to get psychological help from the Church, but said he had doors closed in his face, with priests accusing him of lying, and ever since has been living on the streets.

In 2016, he went back to the cathedral when Ezzati was hearing confessions, and told him what was done to him. The cardinal reportedly gave him a hug, told him to pray for Rivera, and had another priest give him the equivalent of $50.

The man heading a preliminary investigation by the Church in 2015, Father Walker Acuña, determined in July of that year that the testimony of Rojas was “credible,” and that his wasn’t the only complaint against Rivera.

One of Rivera’s altar boys, trying to clear his name after he was accused of stealing a chalice, presented photos and videos of the priest having sex with eight other men, one of them a minor, in the bedrooms located on the second floor of the cathedral.

Another witness, also a priest, said that in 2011 a mother had come forward accusing Rivera of “sexually initiating” her son when he was 16.

The photos and videos presented by a man identified as “F” were received by Acuña and Father Óscar Rivera Soto. Soto is the former chancellor of the Archdiocese of Santiago, and was removed from his post in early 2018, after confessing that he had sexually abused some of his nephews, all of them minors.