Church set on fire in Lahore 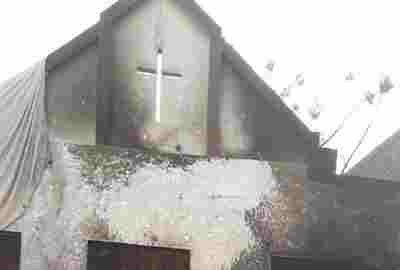 Building set ablaze over use of its loudspeakers during Muslim payer times.

In the pic: The Apostolic Church building in the Baath neigborhood of Lahore was set ablaze Jan. 7. (ucanews.com photo)

Lahore (UCAN): A church building in eastern Pakistan has been set ablaze following a row over the use of its loudspeakers during Muslim prayer times.
"During the evening, Muslim villagers went to Pastor Yaqoob Saroya and asked him to turn the loud speaker off, saying that it was the time for Islamic prayers but he refused," Sardar Musthaq Gill, a Christian lawyer and head of the Legal Evangelical Association Development, told ucanews.com.
The Apostolic Church building in the Baath neighborhood in Lahore was conducting a healing prayer session at the time on Jan. 7.
"Later that night, someone broke into the church building, set furniture, tents and other stuff on fire and escaped," Gill said, adding that several copies of the Bible were also burnt.
Soba Saroya, brother of the local pastor who lodged a police complaint, said local Muslims were cooperating with church officials to help identify the culprits.
"There is no tension in the neighborhood at this moment. A meeting between Christians and Muslims took place Jan. 10 to settle the matter amicably," Saroya said.
Father Emmanuel Yousaf Mani of Lahore condemned the arson attack on the church. “This is the first incident of attack on our place of worship this year. The government should immediately apprehend those responsible and urge people against taking the law into their own hands,” said the director of the Catholic bishop's National Commission for Justice and Peace.
Father Mani said he has always been cautious when Mass timings coincide with the Muslim call for prayers.
“I always instruct my catechists to lower the volume of church loudspeakers during Islamic prayer.
Nonetheless, “both sides should respect another’s religious practices,” he added.
Pakistan has witnessed several such instances of violence against Christians
In November last year, the office of a Christian TV channel, "Gawahi" was damaged in an arson attack.
In May last year, mobs attacked a church and set fire to Christian homes in Dhoop Serri, Lahore after they accused Christian youths of burning pages from a Koran.
Two months earlier, blasts at two Catholic churches killed 15 people.