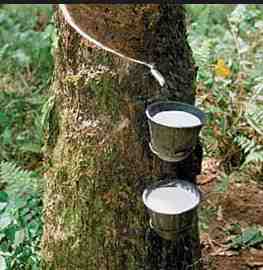 ( Note: Rubber farmers in Kerala are in great trouble, no doubt. Rubber price has fallen from Rs 220/ kg to less than 100/- now. The present price may just cover the tapping and maintenance expenses; thats’ it. Rubber is the main earning source of most of the farmers living in Kottayam and Idukki districts. These are the districts thickly populated by Christians in Kerala. Therefore, it is natural that Kerala Bishops raise their concern. They know that Church shares also are affected. Where it is the Central Government which is mostly responsible for this fall in price and where it is the State Government which is slammed by the KCBC, people smell politics. It is natural that the public think that Kerala Bishops have an intention to strengthen Infarm, an organisation controlled by a few Bishops.

It would have been nice if Infarm was a perfect substitute. Shri Reji Njallani, a middle class farmer and the present Secretary of KCRM has been repeatedly requesting Infarm officials to clear his outstanding dues. He alleges that he has been cheated by Infarm. Are the Bishops pushing the farmers from frying pan to burning fire? Joseph Mattappally – asso. editor.)

The Kerala Catholic Bishops Council (KCBC) has slammed the Congress-led UDF government in Kerala for not addressing the issues of farmers.

In a circular, which was read out in Catholic churches in the state on Sunday, the KCBC urged farmer cutting across religious lines to unite to strengthen the Indian Farmers’ Movement (Infarm), based in Kottayam district.

The Farmer’s Day celebrations conducted by the government were mere shams, the KCBC said.

“Apart from the fall in prices of agriculture and cash crops, the issues in fisheries sector, climate changes, bogus environmentalism, debts and disputes over title deeds have posed huge challenges for the survival of farmers. Both the government and the officials neglect the farmers who produce food for the entire population and raw materials for industries,” the circular reads.

The KCBC also flayed the government for forcing an entire section of people to agriculture by giving loans and subsidies and turning their back on farmers at the time of crisis.

“The government orders financial benefits for government employees and pensioners every year and wries off debts of companies and boards which were locked up due to malfunctioning, but it does nothing for the farmers, fisherfolk and the poor,” the circular adds.

The circular criticises that the government failed to ensure price stability for crops, including rubber, solve issues of farmers and fisherfolk on the basis of the reports of Gadgil, Kasturirangan and Meenakumari panels, and settle issues regarding title deeds distribution, Manoramaonline reported.