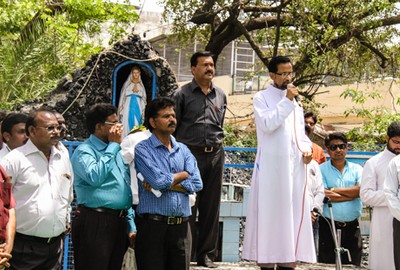 No arrests yet as fear grows of further sectarian incidents.

Police have failed to make an arrest four days after a church was attacked in the northern Indian city of Agra raising fears among the Christian community that religious extremists are targeting them because of their faith.

St Mary’s Church was desecrated in the early hours of April 16 by suspected Hindu hardliners who broke open the church gates and destroyed two statues.

They also tied a dog’s leash around the neck of a statue of the Mother Mary and tried to force open the door of the church but failed. A vehicle on the premises was also damaged.

“Five teams are working on the case but we have not been able to gather any evidence or find a lead,” police spokesman Nirmal Singh, told ucanews.com on Monday.

The Catholic Bishops Conference of India (CBCI) condemned the attack, saying it was carried out to create a feeling of insecurity among minority communities.

"The way the venerable statues were attacked and desecrated to bring maximum shame and disgrace on the icons confirm that these were not just mere acts of vandalism, but well planned dastardly acts, aimed at deeply wounding the religious feelings and creating a feeling of insecurity among the minorities," the CBCI deputy secretary-general Father Joseph Chinnayan said in a statement.

The attack on the church has also heightened fears among the Christian community in the area, with many feeling that more sectarian incidents could soon follow.

“This is the beginning and it is not good. We have been hearing about attacks on churches in Delhi and elsewhere in the country but we were very sure nothing of this sort would happen here. This is very distressing,” local parishioner Vincent Rozario said.

“I was born and brought up here and it hurts to see there is so much hatred growing among people…. I don’t know why they [the attackers] stooped so low and what they wanted to achieve,” said Alfred Rozamio, also a parishioner.

Rosario said the damage to the church would have been greater if the perpetrators had managed to open the front doors and get in.

Helen Jain, another parishioner, said Christians in Agra have always lived like a family with others but “the incident has made us cautious and we will have to tread carefully”.

“Today we are having a day of prayer inside the church. Community members are observing a fast and a silence protest against the attack,” he added.

Earlier, around 200 people, including leaders from other faiths, gathered at the church April 17 for a prayer meeting.

All the religious leaders condemned the incident and vowed to unite and fight against anti-social elements.

Since December, at least six churches in Delhi have been vandalized and several other alleged anti-Christian attacks have been committed across the country, including the rape of an elderly nun. Christian leaders say the incidents are hate crimes carried out by Hindu hardliners. However, Indian authorities claim that criminals carried out the attacks.