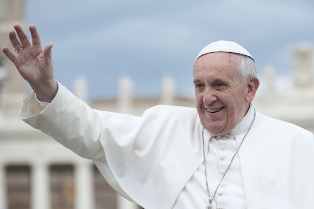 Vatican City: Pope Francis has urged those responsible for training future priests and nuns to develop the ability to say no to those they find lacking in quality to lead a vowed life.

“Vocational discernment is important,” the Pope told some 1,300 formation directors for religious orders who had gathered at the Vatican April 7-11 for a conference on “Living in Christ according to the way of Life of the Gospel.”

The conference was among several programs the Vatican Congregation for Consecrated life and Societies of Apostolic Life is holding to mark the Year of Consecrated Life.

Although Pope Francis recently announced the upcoming Jubilee Year of Mercy, the Year of Consecrated Life is still going strong. It began Nov. 30 2014, the first Sunday of Advent, and will conclude Feb. 2, 2016, the Feast of the Presentation of Jesus.

The pontiff, a former Jesuit novice master, said formators must be “lovingly attentive” to those they are guiding so that “the eventual crisis of quantity does not result in a much graver crisis of quality.”

However, he does not want the directors to “chase away” young people they find unfit for religious life. Instead, he wants them help settle in life those leaving religious life. “Like you accompany the entry, accompany also the exit, so that he or she finds their way in life, with the needed help,” Pope Francis said.

The conference saw almost a dozen presentations on various aspects of religious formation, or preparing and working with people who feel called to enter religious orders or institutes, report agencies.

The Pope says vocation crisis would not become a problem if those who have opted to lead a consecrated life are able to transmit their joy to others. Therefore, formation, not recruitment, should be the top priority for religious congregation even if fewer people are joining them, he added.

“It is necessary to be lovingly attentive to the path of each and to be evangelically demanding in every phase of the path of formation,” he said, “beginning with vocational discernment, so that the eventual crisis of ‘quantity’ might not determine the much graver crisis of ‘quality.’”

“Consecrated life is beautiful. It is one of the most precious treasures of the Church, rooted in the vocation of baptism,” the pontiff said.

Those responsible for the formation of young people, he added, have the “privilege to participate in the work of the Father who forms the heart of the Son in those whom the Spirit has called.”

He urged formators to be true mothers and fathers to those under their guidance. Formators should possess “a great heart for the young, to form in them great hearts, able to receive everyone, hearts rich in mercy, full of tenderness.”

“The young must be formed in humble and intelligent freedom to let himself be educated by God the Father every day of their life, at every age, both in the mission and in fraternity, both in action and in contemplation,” he said.

During the audience, Pope Francis also warned against the temptation of feeling that their task as formators is a burden insofar as it takes away from other duties.

“The mission is important, but it is also important to form those for the mission, form the passion of proclamation, the passion for going wherever, in every periphery, to tell everyone about the love of Jesus Christ, especially to those far from the Church, to the little ones, and to the poor, and let ourselves be evangelized by them.”

“All this requires a solid base, a Christian structure of one’s personality that today families rarely know how to give,” he added. “And this increases your responsibility.”

The number of people in Catholic orders in many parts of the world has declined in past decades.