14 booked for vandalising Church in Haryana 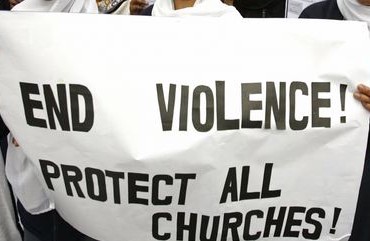 Hisar – The Haryana police said on Monday that 14 miscreants have been booked on charges of vandalising an under-construction church in Kaimri village in the state’s Hisar district on Sunday. The Cross in the Williwarsh Church was replaced with an idol of Hanuman.

The police booked the accused under Sections 147 (Punishment for rioting), 153A (promoting enmity between groups), 295 (destroying, damaging a place of worship with intent to insult the religion of any class of persons), 380 (theft in a building), 506 (criminal intimidation) of the Indian Penal Code, based on a complaint lodged by Father Subash Chand of the church.

However, no arrests have been made yet, PTI reported.

In the complaint, Chand claimed that the accused removed the Cross and placed a statue of Hanuman and also hoisted a flag depicting Lord Ram, apart from threatening to kill him. They ransacked the under-construction church, stole a cooler and other items.

The attack on the village is said to be in response to the alleged forced conversion of villagers to Christianity being carried out by Chand. The villagers claimed that despite knowing there were no Christians in the village, the Christian priest was constructing the “Believers Church” on the land allotted to him for construction of his house.

“There is not even a single Christian family in Kaimri village. Priest Subhash is trying to convert some of the families by luring them with money, food and other facilities,” village sarpanch Dalbir Singh told The Times of India, adding that those booked by Haryana police are innocent.

“The villagers who have been booked by the police on the complaint of the priest were not involved (in razing the structure). The land where the church was being built was bought by him (priest) from some society and it had even issued a notice to him about the illegal construction of the church. The priest is engaged in occult practices for conversion,” Singh claimed.

The president of All India United Christian Front Sukhdev has condemned the attack and said: “This is a matter of shame that the villagers demolished a church. We will hold a press conference in Hisar soon and request the Superintendent of Police to take action against the culprits.”

In recent months, several attacks have taken place on Delhi churches, and one on a Christian school. Only a couple of days ago, a 72-year-old nun was gang-raped even as the miscreants ransacked the school-cum-convent in West Bengal.