No Island of Affluence can be! Big jolt to Chandrababu Naidu: 18 TDP MLAs in touch with us, claims BJP 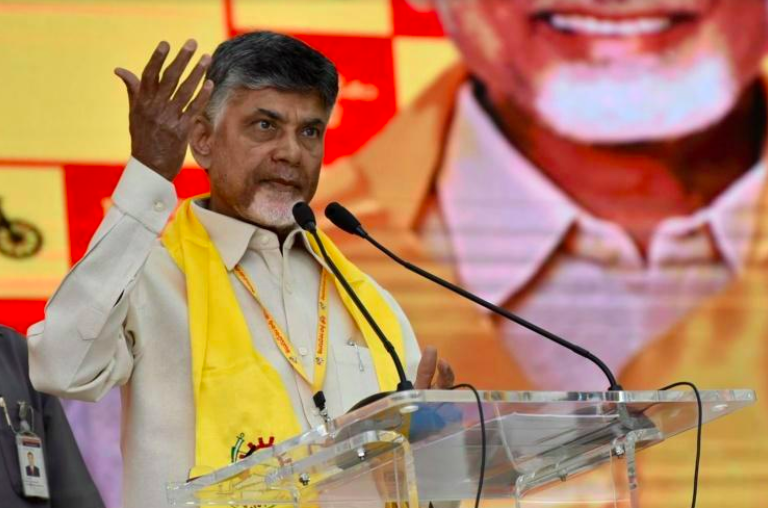 "The MLAs are approaching us as Chandrababu Naidu will soon be in jail on alleged corruption charges," BJP National Secretary Sunil Deodhar said.

All ready during the election campaign, according to feed back we received,  the general public was up against Naidu in AP because of his corrupt practices. And there was such an enthusiasm and support for Jagan’s landslide victory and clean image.

So no wonder if his own MLAs and MPS are deserting Naidu. The rule for politicians in India is to desert the sinking ship and join the floating ones, the victorious  parties with money. The BJP seems to be using its enormous wealth to buy as many politicians without principles as possible.

But the law of the land seems to be catching with Naidu. Unfortunately it does not happen all the time. The most corrupt are the most wealthy parties, and they break through all nets like big sharks. The most corrupt go scot free to continue to do havoc to the  nation. Many of those who looted the nation are living lavish lives abroad.

This is what make drives many rationalists to become atheists. Which means that more well-meaning people, concerned with Common good and well being of the poorest, oppresst and marginalized need to come into public domains, both in Religion and politics.

Pope Francis is a shining example in Religion and Angela Merkel of Gernany in Politics. Capitalism, Socialism and  Communism, all are chasing the dream of a Paradise, of Workers or Entrepreneurs, here on earth, which is impossible to achieve.

No Island of Affluence possible!

One thing the whole world can be assured of is that there can never be an island of Affluence (paradise) in a sea if misery. Its scriptural version is: “We can’t have a lasting city here below!” The starving around that Island like termites or sharks invade and swallow up their affluence. That is what is happening today through migration from poor to rich countries.

The solution to this crisis is controlled migration to care for those most in need or dying of starvation. That alone is ratio d’etre  of Good News to the poor Jesus preached.    james kottoor, editor CCV in US

Please read below report on TDP

The Telugu Desam Party (TDP) seems to be on the verge of collapse, as more than two-thirds of party MLAs have approached the Bharatiya Janata Party (BJP), the state unit of the party in Andhra Pradesh claimed.

After a major defection in the Rajya Sabha, where four out of six TDP MPs defected to the BJP, the developments in Andhra Pradesh seems set to deliver a big jolt to TDP supremo N Chandrababu Naidu who is making last ditch efforts to prevent party legislators from pulling off another defection on the lines of the one in the Rajya Sabha.

Talking to IANS, BJP National Secretary and co-in-charge of Andhra Pradesh, Sunil Deodhar said that around 18 MLAs were in touch with his party. At present TDP has 23 MLAs in the 175-member Assembly of Andhra Pradesh.

"The MLAs are well aware that Chandrababu Naidu will soon be in jail on (alleged) multiple charges relating to corruption. Several close aides and family members of Naidu are also involved in corruption. It is for this reason that MLAs are approaching us. They realise that TDP's image of a clean party has taken a beating," said Deodhar who is also BJP's state in-charge for Tripura.

Upbeat about political developments in the state favouring BJP, the party is launching one of its biggest ever membership drives in Andhra Pradesh which will begin simultaneously from all Dalit settlements in each district of the state.

"Our focus is to reach the poorest of the poor. We are targeting at least one lakh new members in each Lok Sabha constituency. Beside this programme, the party is also preparing for the all important annual three-day meet of top RSS leaders beginning July 11 in Visakhapattnam," said Deodhar, a full-time pracharak of RSS in the northeast, who later joined as national office-bearer of the BJP.

Deodhar also informed that on July 6, RSS Sarsanghchalak (Chief) Mohan Bhagwat will be present in Guntur for a gurudakshina programme. Several senior BJP leaders are expected to join this function.

Commenting on the TDP's dismal performance in the recent state assembly polls, Deodhar said that Naidu threw norms of propriety to the wind as his government indulged in gross financial irregularities.

"TDP is now a party with no future as Naidu's misdeeds and acts of corruption have been exposed in public. From cash-for-vote scandal to various controversial government contracts awarded by his (TDP) government, Naidu seems neck-deep in corruption. The sword of arrest hangs over his head. It is almost certain that he (Naidu) will be in jail soon," said Deodhar who was the main architect of BJP's historic win in the Assembly elections of Tripura.