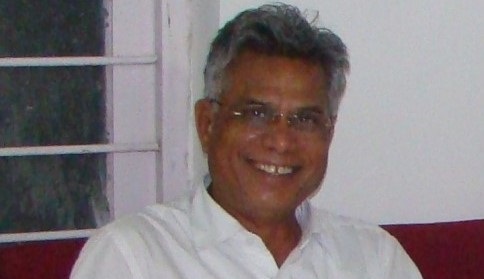 Well known community leader and advocate of Gujarat High Court, Mr. Kirit J. Macwan is a former president of Gujarati Catholic Samaj and National Secretary of All India Catholic Union (AICU).  He has sent to CCV the following e-mail for publication in its website.

CCV welcomes the moral courage of Mr Kirit, albeit with a reservation on his observation on Fr Rocky Pinto.  Having been a former president of Gujarati Catholic Samaj, CCV believes that he speaks from a position of pre-eminence and strength of conviction.

I have been fighting against the proposal of a priest of very poor moral character, Fr Rocky Pinto, Principal, St. Mary’s High School, Nadiad as a new Bishop of Ahmedabad diocese which has nearly 1 Lac (100k) Catholics. The post of Bishop fell vacant after incumbent Bishop Thomas Macwan was elevated as Archbishop and transferred to Gandhinagar Archdiocese on 12th Sept 2015. ABsp Thomas recommended the name of Fr Rocky for personal and extraneous considerations, particularly, to manage/cover-up financial irregularities allegedly pertaining to money being earned from self- financed English medium schools that he started and misutilization of the foreign funds  being received.

Ultimately, my persistent vocal efforts with Holy See succeeded and now, it has been declared that the name of Fr Rocky has been rejected. Process for the new name has reportedly started.

Normally, name of a priest recommended by outgoing bishop is considered favourably by the Holy See for new Bishop. This is the first time in the known history that the name recommended by the outgoing Bishop has been rejected by the Holy See. This is an insult of ABsp Thomas, to put it mildly. Let us hope and pray that a new name that would be recommended is appropriate, deserving and acceptable by and large OR Holy See take independent decision in the larger interest of the faithful, both celibate/chaste and married and of course, mother Church.

Many well-meaning priests who did not support the name of Rocky have heaved a sigh of relief as had Fr Rocky been appointed as the Bishop, his coterie would have played havoc in the diocese. They have been praying and supporting the move to counter the name of Rocky.

All feel, it’s an inspiration of Holy Spirit that has worked miraculously in favour of the interest of the mother Church.

Congratulations on your changing the tide almost single-handedly in the selection of Bishop of Diocese of Ahmedabad, Gujarat. Your courage and persistent follow-up with the Pope is indeed praiseworthy and singular.  Members of the Laity should emulate you.

In this context, may I request you to take a look at my following comments in US Catholic in December 2013 in response to an article "Should laypeople have a role in choosing their bishops?" The article also appeared in Ucan and Silent Voice (in January 2014):

Should laypeople have a role in choosing their bishops?

With reference to the article in US Congress and reproduced in India in UCANews, ICAN, Silent Voice and in the Herald on whether the Laity should choose their Bishops, the answer is certainly yes. After all Laity would be exercising its right as "Co-partners", a right it has blissfully surrendered to the Clergy in spite of comprising 80% of the Church. There is a joke among the clergy about the Laity – it is a "sleeping giant" and it should carry on sleeping!

The Laity should not only select its bishops but also select its parish priests. The present practice of selection based on the views of a few priests is fraught with gaping holes especially in light of Pope's November 2013 comment on model priests. A number of parish priests are predators in the guise of protectors (shepherds) who use the laity as fodder for their ambition and lining their pockets – in the absence of transparently elected Parish Pastoral Committee and Parish Finance Committee. In this act they are covertly supported by their provincials and bishops / archbishops. It is like political parties joining hands to be out of the ambit of Right to Information (RTI) Act, an act which as per Rahul Gandhi's sermon is meant to weed out corruption!

To do justice to Pope Francis’ desire to select “shepherds who smell of their sheep”, parishioners’ express views should be sought before finalization of parish priests. This can be done first by calling an open meeting of parishioners and then by contacting them through random selection from parish database for their views . It would be seen that most parishes in India including West Bengal do not have a well-structured database so that they can play with the system and the donors. After cross-checking, the list of nominations by parishioners should be announced and put up on church notice boards to ensure transparency.

For the Church to be strong, its foundation has to be strong made of good parish priests who are simple men, devoted to poverty, and not driven by ambition.

In an interview on the BBC’s Today programme last Tuesday, Archbishop of Canterbury, the Most Rev. Justin Welby suggested where a good parish priest is present, churches grow. He further said: “Of course there are churches that are doing better and churches that are struggling more, depending on area and on leadership. But the reality is that where you have a good vicar you will find growing churches.”

The selection of Parish Priests and Bishops by the Laity is all the more pertinent in view of Pope Francis' comment on priests when he said men studying for the Roman Catholic priesthood should be properly trained or the Church could risk “creating little monsters” more concerned with their careers than serving people. In comments made in November but only published on Friday, Francis also said priests should leave their comfort zone and get out among people on the margins of society, otherwise they may turn into “abstract ideologists”. This is very pertinent in light of BBC News yesterday (18 January 2014) which revealed that the Pope Emeritus Benedict had DEFROCKED around four hundred priests during the last two years of his pontificate on proven charges of child abuse. No wonder the agony made him relinquish his post. Financial abuse (lining one's pockets with funds donated for the Laity) is a bigger corruption to take note of while selecting Parish Priests.

Compared to Bangladesh which abounds with local talent, West Bengal its predecessor is a clear case where there is a drought in vocation due to local talent not being nurtured and local priests/bishops not being at the helm of affairs. In India the church is very clannish though it is supposed to be Catholic which means universal. The cash rich Salesian congregation is totally controlled by Keralites so much so that novices and priests from other communities are not allowed to breathe free to ensure south hegemony.

Some dioceses are even without Bishops. Bagdogra Diocese has been without a bishop for more than two years since its bishop was elevated to Archbishop of Calcutta. To cater to vacant Bagdogra the Archbishop has to rush there frequently. Calcutta Archdiocese itself being large and widespread needs two Auxiliary Bishops (like Mumbai) to render due pastoral care. In July, Raiganj diocese will have another vacant see due to Bishop Alphonse D'Souza's retirement. The local laity’s views must be transparently considered before selection of Bishops for these places.

In keeping with the practice of the church hierarchy in Kerala, Tamilnadu, Karnataka, Orissa, Jharkhand, North-east and Darjeeling where sons of the soil are given the top posts, though ideally the best man should be chosen, similar approach should be taken for West Bengal too. The Church in West Bengal is controlled by the South Lobby i.e. Kerala, Mangalore and Tamilnadu. There is hardly any Bengali face in the top hierarchy including the main training centre Morning Star College Barrackpore. This has resulted in West Bengal’s indigenous rich culture being systematically stymied by the powers that be.

Bishop Vincent Aind has taken over as Bishop of Bagdogra w.e.f. 14 June 2015.

Your group's concern for selection of the right bishop can be addressed only if the Lay representatives (not Ji Haa Ji Haa leaders) are openly consulted in the different parishes of Ahmedabad.  Normally three names are suggested by the outgoing Bishop and his favourite priests.  You have to know these names and if you do not like any your group must suggest alternatives names. The question is how the transparency of selection will be monitored.  Since you are in touch with the Holy See, you are in good position to work out the modalities. But please make sure, the Laity is involved openly and not secretly.