Brexit is another name for house-keeping 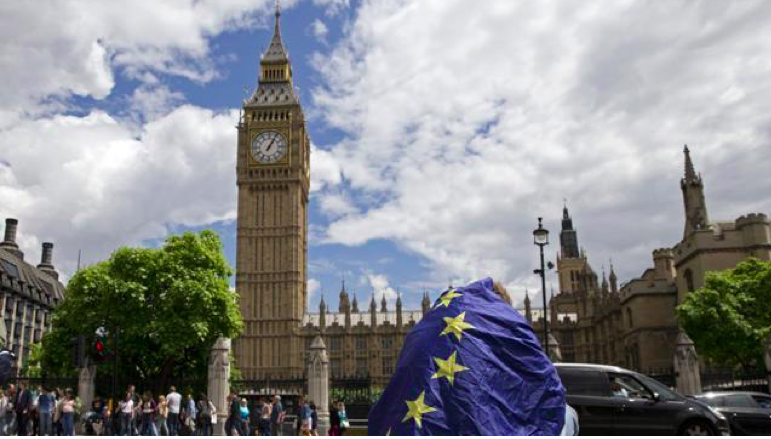 An Island: that is Britain

In the pic: A demonstrator draped in an EU flag sits on floor during a protest against the outcome of the UK's June 23 referendum on the European Union (EU), in central London on June 25, 2016 (AFP)

(Note:  To understand well the psychology, not the economics or politics, of Brexit one should take peep into British history which this article provides. Historically and factually  “Britain is an island”. Briton which was the colonial ruler of India for  years, was itself colonized and ruled by foreigners – Romans, Danes, French, Duch, German.For centuries the language of the Court was French. Nineteenth Britain had a Jew prime minister and the Jew Karl Marx finally found a home in England. That accounts for the “insularity and pettiness” in British thinking according to this article. While the drama, the “divorce” or

the “Earth quake” is played out  the “Nay-sayers” rejoiced and “Stay-sayers” looked glum faced and the world outside which include all of  us may be forced to say: This kind of referendums  are not the way to find out the truth in the wise counsel: Vox populi, Vox Dei, Voice of the people is the voice of God. james kottoor, editor)

Julet Michelet, the famous French historian of the 19th century, began his lectures on British history by saying ‘Britain is an island’. Commonplace though this may sound, the line is illuminating. There is a lot in Britain being an island. It is not unusual to find in learned articles references such as ‘exports to Europe and the UK’.

It may be ironical, or appropriate, that the people of the United Kingdom chose to opt out of the European Union in the 400th year of William Shakespeare’s death. In the play Richard II, Shakespeare described England as “this fortress built by Nature for herself; against infection and the hand of war … this blessed plot, this earth, this realm, this England”. If by infection Shakespeare meant the impurities of the Continent, it’s his view. But if he had thought his ‘fortress’ was insulated from war he knew he was wrong. The play’s protagonist, Richard II, had himself taken part in the Hundred Years War with France though the wars were mostly fought on French soil.

Europe angrily demanded a quick divorce as sparks flew Saturday over Britain’s seismic vote to abandon the EU.European Commission chief Jean-Claude Juncker called for rushing Britain out of the door as the bloc grappled with the impending loss of one of the world’s top economies, the first defection in its 60-year history.

How much of English is English? England had been ruled by foreigners throughout history. First the Romans conquered it and ruled the land as a colonial power. Towards the end of the first millennium, England had a Danish ruling dynasty, followed by the French in the first century of the second millennium. For centuries the language of the court was French. When the Stuarts became unpopular in the 17th century, they had to be replaced by a Dutchman. George I, the first ruler of the Hanover (a city in Germany) dynasty, did not know English. Queen Victoria evidently owed much of her personality to the Germans, else why would she call her dynasty ‘Saxe-Coburg-Gotha’, the place her mother belonged to?

Unlike the US, which had pursued a policy of isolation through the Monroe Doctrine of 1823, England did not keep itself out of continental affairs. In fact it embroiled itself in the War of Austrian Succession and the Seven Years, taking sides with one power and switching to another. It was part of the alliance to counteract Napoleon. When the First World War broke out in the Continent, and it was essentially a Continental war, British foreign secretary Edward Grey remarked: “The lights are going out all over Europe. We shall not see them lit in our lifetime.”

The Brits were aware of this, and so being a Brit was at one time being a liberal even for the Tories. The Jews were treated in a tolerant manner by Oliver Cromwell. Nineteenth Britain had a Jew prime minister. The Jew Karl Marx finally found a home in England.

Yet insularity in the British way of looking at the world there was, and the pettiness that results from it. It is most evident in the English language, which has derogatory words for the Scots (Jock), the Irish (Mick) and the Welsh (Taffy). To say one has welshed is to mean one has not returned the money one borrowed. If someone has levanted, someone has run away with money. We, Indians, were fortunate in that probably we did not even deserve that honour.

All that is in the past now. So when they now say they have won ‘independence’ what is that they are looking for? To regain their British-ness? It does not exist anymore. They do not re-live their history or inheritance. The current angst, by all accounts, is just a matter of house-keeping. 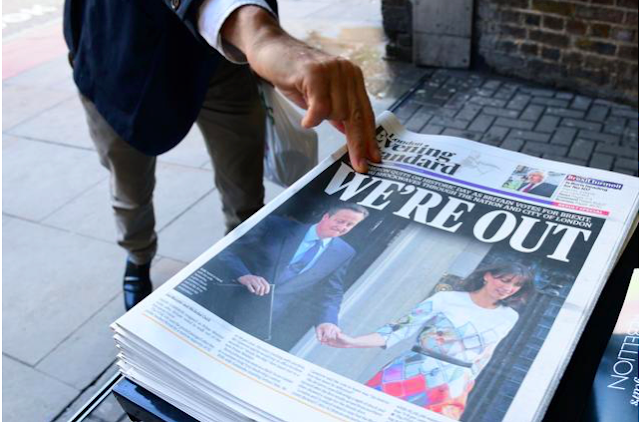 A man takes a copy of the London Evening Standard on Friday with the front page reporting the resignation of British Prime Minister David Cameron and the vote to leave the EU in a referendum. (AFP Photo)

Reflecting the divided nature of the country, Britain’s newspapers were Saturday polarised over the “Brexit earthquake”, some calling it the “birth of a new Britain,” others asking “what the hell happens now?”

“Take a bow, Britain!”, high-selling eurosceptic title the Daily Mail splashed across its front page.“It was the day the quiet people of Britain rose up against an arrogant, out-of-touch political class and a contemptuous Brussels elite,” it added.

“In a magnificent affirmation of national self-belief and character, their resounding message to the elite was: ‘We are fed up with being disdained and ignored over the issues about which we feel strongly’,” said its leading article.Fellow pro-Brexit title the Daily Express carried the headline “We’re out of the EU”, calling it a “glorious victory”, while the Times called it a “Brexit earthquake”.

Meanwhile, The Daily Telegraph hailed the “birth of a new Britain” on its front page.“June 23 2016 will be remembered forever as the day the British voted to retake control of their own country,” said its editorial.

“While many people are understandably worried for their futures, not least after witnessing early volatility on the markets and exchanges, there is every reason to be optimistic,” it added. However, the pro-EU Daily Mirror struck a sombre tone, asking “what the hell happens now?” on its front page while the Guardian wrote “Over. And out” above a picture of departing Prime Minister David Cameron