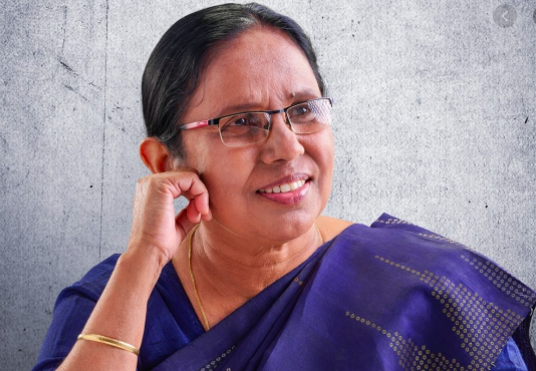 Shailaja Teacher Came Up Against "Double-Chested" Pinarayi Vijayan, why?

Sagarika Ghose, in NDTV: May 19, 2021 37C CM Pinarayi “dumped KK Shailaja teacher!” The first time I read it, my mind responded instantly: “because it casts a dark shadow over Vijayan who started shining bright as the sole luminary in the sky!” ‘Based on your earlier biased preconception’, my mind retorted. “No, no, she is the sole person, like K R Gauri of old to step into the shoes of Vijayan himself!” my mind seemed to insist and argue!

I gave up at that then, coaxing my mind saying: “Don’t jump to conclusions, go slow, sleep over it!” I was doing just that and after nearly a week there comes my favorite columnist Sagarika wring: “Shailaja is thus a victim of her own popularity and competence.. Her well-deserved fame went against her, and made party bosses (more precisely her supreme Boss) insecure.

History repeats itself, even historical blunders! For full proof we have to wait and see what Vijayan will do in 2026: Will Pinarayi Vijayan abide by the party rule of retirement after two terms and give up the chief minister-ship? Will there be then a Shailaja teacher waiting in the wings? Finally will male domination in CPM have ended by then?

Read carefully Sagarika, her comparison of Vijayan to Modi, " Modi in a mundu"; Shailaja’s international popularity, featured in Vogue, profiled by the Guardian and BBC as a "rockstar health minister," listed as one of 2020&#39;s most influential women by the Financial Times, and honoured by the United Nations. Nay she was the sole minister who won with a margin of over 60,000 votes the highest ever in a Kerala election.

Thumps up to Shailaja!

Sagarika also equates Pinarayi’s dumping of Shailaja to the historical blunder of dumping of Jiothi Basu’s chance to become India’s PM – allied to it is that of KR Gauri Amma of Kerala. Will lost chances, denied ones ever come back? In any case you Shailaja will be cherished as the demure exemplary woman care-taker of a Covid- stricken Kerala. james kottoor(Chicago) editor CCV.

During the Kerala election campaign in April, while speaking to a senior Delhi journalist in an interview, Chief Minister Pinarayi Vijayan became suddenly flustered. The journalist asked him if his centralized leadership style and growing personality cult was similar to that of Narendra Modi. Vijayan immediately grew irritated. "This interview is over now, you, have
asked enough questions." Ideologically, they are polar opposites, but like Vijayan, Modi (after the 2007 state elections) in Gujarat was the unquestioned leader of party and government. He had
decimated an entire generation of leaders like Keshubhai Patel, Suresh Mehta and Kashiram Rana, dwarfing the party and directly connecting with voters. Now the supremo cult of the Right is being mirrored by a supremo cult of the Left.

In fact, in Kerala journalistic circles, Pinarayi Vijayan is often referred to as "Modi in a mundu," in a reference to the CM;s, imperious ways with the media. Vijayan once even ordered cameramen to &quot;get out." Now, armed with an unprecedented victory, and dropping all sitting ministers, Vijayan's unquestioned leadership is on display.

The dropping of KK Shailaja, the enormously popular and effective Health Minister, has come as a surprise and even a shock. The CPM maintains that it has always been committed to a disciplined rotation of government functionaries and collective leadership, and could not make an exception for Shailaja, who does not figure in the new government along with four others who are not returning for a second term as minister. "People voted for the LDF on its performance, not
for its faces," said senior CPM leader MA Baby, "the lesson from Bengal and Tripura is that a new team is essential in order to move forward."

Many of the new inductees in the new Kerala government reveal a generational shift away from senior ministers towards newer younger leaders. Among the new ministers is Vijayan's son-in-law, P.A Mohammad Riyas, 45, national president of the party's youth wing. Dynasticism rearing its head in the Left? Kerala watchers say the induction of Riyas is a bow to the Muslim support for the Left in these elections, but a Left leader in Kerala told me Riyas' induction is a worrying sign that Vijayan's decisions cannot be questioned.

This is hardly surprising. The LDF has won a massive and extraordinary victory in 2021 (99 out of 140 seats), a consecutive second term for the first time in 40 years, primarily on Vijayan's name and under his leadership. There have been many firsts for the Left in this win. It was the first time in the Kerala Left that a single leader's face was so overwhelmingly displayed on billboards across the Kerala countryside, as I witnessed.

Another first: full-page ads when Vijayan completed a year in office. It is also the first time that a party apparatchik has so fully embraced privatization and pragmatic economics. In another first, a Left Chief Minister has signaled an accommodating attitude to religious heads. Vijayan has met Catholic priests, Devaswom minister Surendran signaled regret for events during Sabarimala protests. With this kind of win under Vijayan's belt, today there can be no other face or power centre to challenge Kerala's commander-in-chief.

Shailaja is thus a victim of her own popularity and competence. Her well-deserved fame went against her, and made party bosses insecure. She had become the face of Kerala's fight against Covid. She was featured in Vogue, profiled by the Guardian and BBC as a "rockstar health minister," listed as one of 2020's most influential women by the Financial Times, and honoured by the United Nations.
She led Kerala's fight against the Nipah virus so efficiently that she was portrayed in a film. She spearheaded Kerala's Covid battle, addressing daily briefings and forming "Covid brigades."

Her victory from Mattannur with a margin of over 60,000 votes is the highest-ever in a Kerala election. An unassuming woman in a position of power, ever-smiling, neatly-dressed, radiating calm efficiency and empathy in a health crisis, Shailaja Teacher captured hearts not just in Kerala but across India. As the second wave of Covid rages, it was expected that she would continue to provide continuity of leadership in tackling the health crisis; there were reports until late on Tuesday evening that all ministers would be dropped except Shailaja.

There are also reports that CPIM leaders Sitaram Yechury and Brinda Karat expressed their reservations about the dropping of Shailaja, but a weakened central Politburo can do nothing if the Kerala supremo does not want it. Contrast the manner in which Vijayan has had his way now in 2021, to 1996 when a powerful central committee denied Jyoti Basu's candidature for Prime Minister in what he termed a "historic blunder" Basu, the battle-hardened Bengal strongman could
not take on the party&#39;s national leadership, but today, the Politburo can hardly rein in Vijayan.

In a statement after she was dropped, Shailaja was quick to say that the party has taken a collective decision. But the writing is on the beach: nobody shares the limelight with Vijayan, Kerala's "Irattachankan" (double-chested leader).

During the elections, I heard whisperings that being a decade younger than Vijayan, at 64, Shailaja could even be the next Chief Ministerial candidate and successor to the septuagenarian warhorse. A CPM leader told me in worried tones that another big win for the LDF would mean the end of collective leadership, and the rise of Vijayan as unquestioned Left caesar.

This personality-centred party and government may not please old style CPM comrades and is unknown in the Kerala Left. But the LDF now works firmly under the Pinarayi Vijayan Line. This was in evidence even during the elections when two-time MLAs and senior ministers, like Finance
Minister Thomas Isaac, were denied tickets.

Yet, the true test of the CPM's "collective leadership" will come in 2026 when polls roll round again. Will Pinarayi Vijayan abide by the party rule of retirement after two terms and give up the chief minister-ship? Or will the Kerala Left have by then become indistinguishable from the Vijayan cult as the BJP is today with Narendra Modi? (Sagarika Ghose is a senior journalist and author.The opinions expressed within this article are the personal opinions of the author. The facts and opinions appearing in the article do not reflect the views of NDTV and NDTV
does not assume any responsibility or liability for the same.)