Priyanka Gandhi Vadra calls out Centre for its ‘callousness’ on Covid 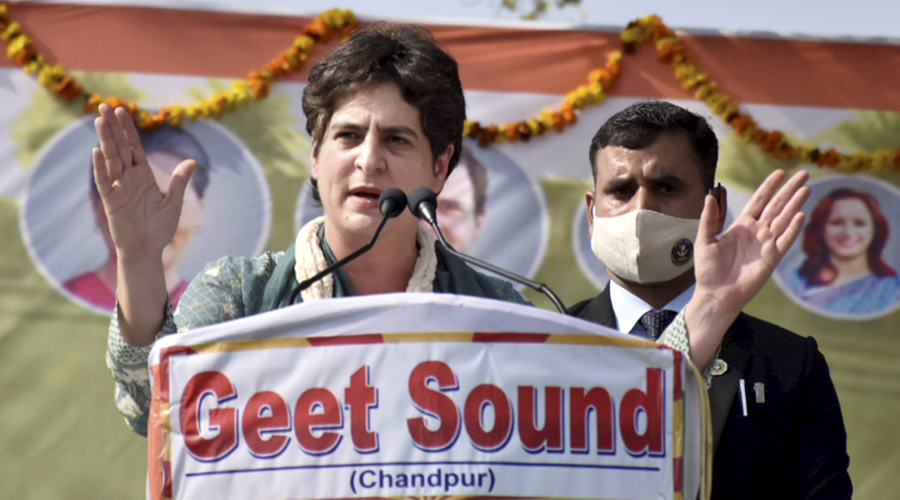 On Tuesday 25 May Congress leader Priyanka Gandhi Vadra clinically dissected the Central Government on its abysmal performance in measuring up to the second wave of Covid-19 (shall we call it Covid-21 because of its new strains/variants?). She has also been using the social media to good effect to press home her points. Indeed in a global crisis how can the states be asked to import vaccines? Import-exports, customs and trade policy are central subjects. As reported in India Today 24 May 2021, Covid-19 vaccine manufacturer Moderna has refused to send vaccines to Punjab directly and stated that the firm deals with the government of India alone and not with state governments or private parties. What Moderna has done is in keeping with the India Government policy on Import-Exports. The Punjab case makes it clear that the Central Government is playing Vaccine Games with states and making a fool of Indian citizens.

If the Congress Party were ever to form a government at the Centre, either on its own strength (looks unlikely) or by alliance with like-minded parties,  what would be the scenario if Priynanka  is  chosen as Prime Minister?   She appears to have all the hallmarks of a good statesman and is miles ahead of Rahul Gandhi in terms of brilliance, maturity and acceptability.  Isaac Gomes, Associate Editor, Church Citizens' Voice.

Who is responsible, Congress leader Priyanka Gandhi Vadra asked on Tuesday as she tore into the government for its “callousness” and for being a “silent spectator” as the country was engulfed by the pandemic and pledged to apportion accountability.

In a Facebook post, Priyanka said questions would be asked of the Centre and promised to place facts in the public domain over the next few days to explain the reasons for the humongous tragedy.

The Congress leader wrote: “Who is responsible? How did we reach here? One of the biggest producers of oxygen and vaccines in the world, a country whose doctors are famous everywhere — how did we reach a situation in which our citizens lost their lives for want of oxygen, hospital beds and vaccines? Questions will have to be asked as thousands have died because of the government’s callousness. Questions must be asked to ensure the government shares its action plan for the future with transparency. Questions will be asked to enforce responsibility and accountability.”

Laying the blame at the central government’s door without any ambiguity, Priyanka said: “The government was expected to deploy all the national resources and capabilities to save lives when the second wave of the coronavirus started playing havoc with the people, when the citizens were struggling for hospital admission, oxygen, medicines and vaccines. But the government slipped into the mode of a silent spectator, creating tragic circumstances in the whole country.”

Priyanka, the Congress general secretary in charge of Uttar Pradesh, had until now been writing to chief minister Yogi Adityanath almost daily to highlight the people’s miseries.

In the Facebook post, Priyanka referred to the disappearance of Modi and other key BJP leaders from the public eye when the pandemic surged through the country.

“The government of India didn’t have anything to offer except callousness. Export of vaccines, doubling export of oxygen in 2020, placing insufficient orders for vaccines show the government’s irresponsible behaviour. How deadly the second wave was could be gauged from the number of deaths. The entire country was in distress. Today when the curve is flattening in the natural course, the government has appeared, using the media and its machinery. Again the Prime Minister and his ministers have started delivering statements.”

“In the coming days, I will put forward some facts under ‘Who is responsible’ to make you understand the reasons for the pathetic situation. On your behalf I will ask some questions to the central government, whose duty it is to answer them. Your cooperation and suggestions are welcome,” she added.

The Congress has been extremely critical of the government’s conduct though it has also given constructive suggestions on all aspects of the pandemic — health, economic and administrative.

The government, however, never demonstrated any inclination to adopt a consensual approach and rebuffed all suggestions with contempt instead of picking the brains of leaders who have administrative experience of decades.

Congress spokesperson and former Union minister Anand Sharma lamented that the Prime Minister always dwelt on “cooperative federalism” but did not walk the talk in these difficult times.

In a series of tweets, Sharma said: “The people of India are suffering and feeling let down. The lives of our people are more important than pride and ego. It is not only the legal and political duty but also the moral responsibility of the government to protect the lives of all Indians.”

Sharma added: “It is India’s tragedy that… India’s vastness and diversity is sought to be micromanaged in the unprecedented crisis of the pandemic. Centralisation of authority and decisions in one or two offices led to disastrous mismanagement.

“The vaccination drive is in a shambles and people are suffering and despairing. In a democracy, questions will be asked and those in authority made accountable. There is no wisdom in denial and challenging scientists and epidemiologists. It is unfair to pass on the responsibility and blame onto states which were left powerless as all decisions were made by the central government.”

Stressing that unity of purpose was vital in these difficult times, Sharma said: “In a global crisis how can the states be asked to import vaccines? Import-exports, customs and trade policy are central subjects. In a country of 140 crore, there will be mutations and variants as viruses do mutate in countries big or small. Accelerated universal vaccination, empowering the states and investing in public health infrastructure alone can meet the challenge.”

Echoing the sentiments of the chief ministers who have felt one-way communication won’t help, Sharma said: “Democracy is about cooperation and dialogue. The Prime Minister has a mandate as the elected leader of the country. So have the chief ministers of states a constitutional mandate, which must be recognised. The path of confrontation between the Centre and the states hurts India’s national interest. Modi has spoken of cooperative federalism. It is time to walk the talk.”