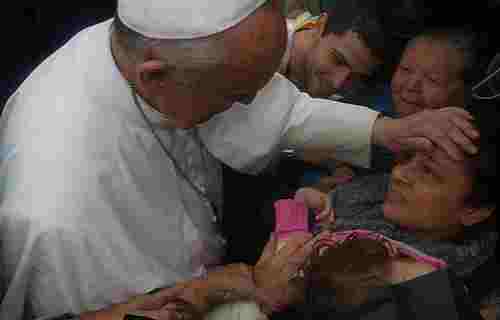 By Elise Harris. Vatican City, Apr 7, 2016 / 06:04 am (CNA/EWTN News).- Pope Francis will travel to the Greek island of Lesbos next Saturday, April 16, where he will meet with ecumenical leaders and refugees, the Vatican announced Thursday.

Director of the Holy See Press office, Fr. Federico Lombardi, told journalists the invitation for the Pope to visit the island came from Ecumenical Patriarch of Constantinople, Bartholomew I, and Greek president Prokopis Pavlopoulos.

A Vatican statement released April 7 to journalists said the Pope, along with “His Holiness Bartholomew, and His Holiness Jerome II, Archbishop of Athens and All Greece, will meet with the refugees accommodated there.”

While on the island, Pope Francis will be joined by Patriarch Bartholomew and His Beatitude Hieronimus II, Archbishop of Athens and all Greece, in meeting with the refugees staying on the island.

Fr. Lombardi told journalists that it was a “common” initiative, and that “no one can say who started the initiative. It’s an initiative of all the Christian churches together.”

There is still no schedule for the last-minute trip, however the spokesman explained that a meeting will take place on Tuesday to organize the final details of the trip.

He said that it will be a “brief” visit, but that a meeting with the refugees, a public gathering and an ecumenical encounter are all likely to be included.

Lesbos has been one the primary destinations of migrants fleeing war-torn countries such as Syria and Afghanistan who seek entry into the E.U.

With a financially stressed economy, Greece has been largely unprepared for the thousands of migrants who have shown up on its shores.

In 2015 alone more than 1.1 million migrants fleeing war and violence poured into Europe, and the influx has continued. Many Syrians seeking to escape the civil war which has devastated their country for the past five years enter Europe through Turkey, taking boats to the Greek isles.

With leaders perplexed as to how to handle the migrant flow, a new deal was recently struck between the E.U. and Turkey stipulating that all migrants and refugees who cross into Greece illegally by sea will be sent back to Turkey once they have been registered and their asylum claims processed.

In return, the E.U. agreed to take in thousands of Syrian refugees directly from Turkey, giving the country early visa-free travel and advancing talks regarding their E.U. membership negotiations.

Pope Francis’ visit, then, will be a strong sign of hope and solidarity for the migrants and the entire ecumenical community.