‘There are always doors that are not shut’ – Pope Francis on meeting Trump: 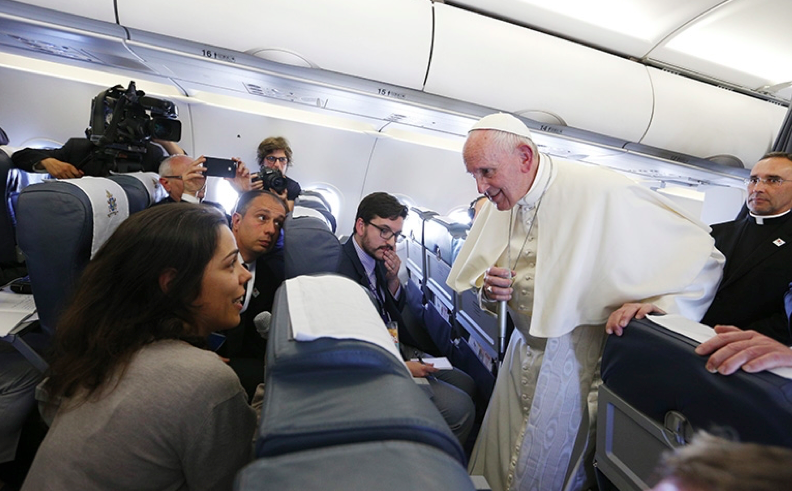 Pope Francis listens to a question from Joana Haderer of LUSA as he speaks with journalists aboard his flight from Portugal to Rome May 13; Joshua J. McElwee, NCR Vatican correspondent, pictured third from right (CNS/Paul

(Note: Pope-Trump meet is scheduled for May 24th  The whole world is watching and wondering what would be the body language of both, what they would actually say to each other etc. But Francis is not bothered about any of these because he does not prejudge anyone. He  believes even in the worst of us there are many admirable traits, may be like smoldering coal under the ashes which only an earnest and honest treasure hunter can unearth with one’s warm breath.

That is what his conversation with journalists in the plane reveals. He believes in honesty and plain-speaking without fear or favour and without being judgmental. Hence he approves of Marie Collins critique of Vatican officials. He does not speak or want others speak in order to “please people” (placenes hominibus). That would be hypocritical. So he had to tell Trump that one cannot be a Christian and build walls, and not bridges, not to offend but to help him reflect.

And when he actually meets Trump, Francis would be an anxious listener to whatever Trump may have to say and only after hearing and reflecting on whatever the President may have to say, Francis would respond and it will be “calling a spade a spade”, if disagreeable, presenting it in an agreeable way, that is, with care and concern and never with the intent of winning an argument because he knows better than anyone that to win an argument is to lose a friend. Francis would be the last person to say or do anything, to lose Trump’s friendship.  We have to wait till 24th  and see how everything is going to be played  out. james kottoor, editor)

ABOARD THE PAPAL FLIGHT FROM PORTUGAL: Pope Francis has said he will focus in his upcoming meeting with U.S. President Donald Trump on finding even little openings where the two might have common interests and can work together.
In a half-hour press conference aboard the papal flight from Portugal Saturday, May 13, the pontiff also praised clergy abuse survivor Marie Collins. He said Collins, who resigned from the papal sexual abuse commission in March, was "right" in critiquing Vatican officials' resistance to fighting abuse.

Francis told journalists he refused to make judgments about Trump personally ahead of their planned May 24 encounter at the Vatican."I never make a judgment about a person without listening to them," said Francis, adding that he expects many issues will come up in the meeting. "I will say what I think; he will say what he thinks," the pope continued.

Asked what people can expect to occur in a meeting between two leaders known to disagree on many issues, such as immigration and environmental policies, the pontiff responded: "There are always doors that are not shut."

Francis said people can expect he will be "searching for the doors that are at least a bit open, entering and speaking of things in common and going ahead, step by step."

The pope said he will not enter his meeting with Trump seeking to "soften" the president's policies. "That is a political calculus that I do not permit myself to make," he said, adding: "Even in the religious sphere I am not a proselytizer."

"Peace is handcrafted," said Francis. "Friendship between people, getting to know each other … is also handcrafted. You do it every day."

Anticipation has been high in recent days about the Trump-Francis meeting, which the president will be undertaking as part of his first foreign trip. The two leaders are known to have divergent opinions on a number of issues.

They famously had a tense exchange in February 2016, when Trump called the pope "a political person" for celebrating a Mass near the U.S.-Mexico border and Francis questioned Trump's Christianity over his support for a wall on that border.

Francis spoke about the president Saturday as part of a press conference that also touched on a number of other issues, including the efficacy of his actions to prevent clergy sexual abuse, his view of the reported apparitions of Mary in Medjugorje, and his just-completed trip to Portugal.

Marie Collins 'right' and 'capable'. On clergy abuse, the pope was asked about Collins' resignation from the Pontifical Commission for the Protection of Minors. Collins, an Irishwoman, left the group in March due to frustration with Vatican officials' reluctance to cooperate with its work to protect children.Francis said he has spoken to Collins and she was "right" in the frustration she expressed at the time of her resignation.

"Marie Collins has explained things to me very well," said the pontiff. "She is a capable woman who wants to work." "She is a bit right," the pope continued. "There are many cases in which we are behind."

But Francis also praised steps the global church has taken in recent years to protect children. He cited the fact that most dioceses around the world now have policies in place about how to treat priests accused of abuse, calling that "great progress."The pontiff suggested that the Vatican could decentralize some of its authority to judge priests accused priests by creating regional or continental tribunals, saying implementing such an idea is "in the planning stages."

Francis also said he respects all decisions made by Vatican tribunals about accused priests and has never issued a pardon for a priest found guilty, known in Italian as issuing a letter of grazia. "I have never signed a grazia," the pontiff said bluntly.

In an exclusive statement for NCR explaining her decision to resign March 1, Collins said she was leaving the pontifical commission after Vatican officials failed to implement a series of its recommendations. The abuse survivor expressed particular frustration about Vatican officials' reluctance to cooperate in helping create a sample template of guidelines for safeguarding children and to send acknowledgment letters to victims who contact the city-state.

"We are going ahead," Francis said Saturday. "Marie Collins was right about some things. But we also are moving forward."