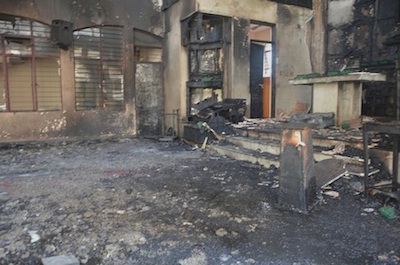 Evangelicals, mainline Protestants, Orthodox, Catholics, and Pentecostals all were present there in an unprecedented protest against fire at St. Sebastian church located in Dished Garden area in east Delhi. The faithful said that they suspected the church was a target of arson. The fire destroyed much of the building, including its prayer hall, altar, and all statues. The police initially blamed the fire on faulty wiring saying it was caused by a "short-circuit", but after protests by Christian community, they registered a case against unnamed people.

Not an Isolated Case

The fire case is not the result of stray act, but looks part of an all India pattern. In many parts of India, religious persecution has been a harsh reality. Dang (Gujarat) in 1998, Mangalore (Karnataka) 2007, Kandhmal (Odisha) 2008are some of the major anti-Christian violence incidents reported. Since 1998, India has witnessed a new wave of anti-Christian violence.

In 2013 alone, about 4000 Christians were targeted, of which over 1000 were women and 500 were children. Over 400 clergy and community leaders also bore the brunt of the attacks. Anti-Christian violence saw over 100 churches vandalized, statues desecrated and worship meetings disrupted according to a report “Christian Persecution in India 2013 Report” prepared for Catholic Secular Forum (CSF), a Mumbai-based national activist NGO by Justice Michael Saldanha, former judge of the Bombay & Karnataka High Courts.

According to the report  “Karnataka, Maharashtra and Andhra Pradesh topped the list of rogue states in Christian persecution, while gruesome murders for the faith took place in Rajasthan, Karnataka, Odisha, Tripura, UP and MP, etc. The states of Chhattisgarh, Madhya Pradesh, and Odisha were in the top 10 persecuting states. States like Jharkhand, Tamil Nadu, Kerala, and Delhi were new entrants. Other states that are persecution hot spots include Uttar Pradesh, Jharkhand, Jammu & Kashmir, West Bengal, Gujarat, Manipur, Tripura, and Assam.

The government communalizes benefits of employment, education, and finance to millions of schedule castes, who have converted to Christianity or Islam over the last 60 years. A rally on 11th December 2013 in the national capital by the Catholic Bishops Conference and the National Christian Council of India, supported by a large number of Christian NGOs was targeted by the police. Archbishops, clergy, and activists were arrested, beaten and had water cannons used against them.

Christians do not believe in ‘forced conversion’ as it is an act of inner faith. However in the name of ‘conversion’, Christian priests, nuns and pastors are harassed with impunity. Anti-conversion laws exist in at least seven states – Odisha, Arunachal Pradesh, Madhya Pradesh, Rajasthan, Gujarat, Chhattisgarh, Himachal Pradesh and Tamil Nadu, which recently repealed it. These are used to persecute Christians [and Muslims] on false allegations that conversions are undertaken by force or inducement.

A legacy of the Emergency in 1975, it is used extensively to curb dissent and control NGOs working in the area of social empowerment and human rights. In August 2012, over 4139 NGOs had their FCRA registration revoked. The work of a number of Christian NGOs has been affected because of this. During the Kudankulam agitation, where the Catholic Church played an active role, the diocesan trusts had their FCRA licenses withdrawn.

Almost half of the states do not have State Minorities Commissions (SMCs). The 14 states that do not have SMCs  include Gujarat, Punjab, Haryana, Himachal Pradesh, Jammu & Kashmir, Odisha, Kerala, Goa and six North-Eastern states. Gujarat has been persistently refusing to set up a SMC, despite repeated prodding by the National Commission for Minorities. In states where SMCs do exist, their effectiveness is open to serious questioning.

Minority educational institutions are often targeted not just by extra-constitutional and non-state players, but also by government departments. In most states, the Education and Minority Affairs ministers are non-Christian politicians who have attempted to make rules encroaching on the rights of Christians to manage their institutions. A case in point is St. Xavier’s College or St. Mary’s School in Mumbai, which have had to repeatedly approach the High Court for justice. In view of rampant privatization of sectors like social services, education and Medicare, the government auctions land that either Christian institutions or NGOs can ill-afford.

The National People's Tribunal held in New Delhi on 22-24 August 2010,reported on religious ethnic economic conflict as follows:"They [Christians] have faced persecution in all its forms-such as social and economic boycott as well as religious ,caste based and cultural conversions as an issue for political mobilization and to incite horrific forms of violence and discrimination against the Christians ….including forced reconversion as well as the institutionalization of humiliating rituals."

Rise of Rightwing and Persecution

Following May's election of the nationalist right wing political party, several Indian church leaders had said that they were not concerned that extremist groups would rise up against minorities.

"Minorities, such as Christians and Muslims, are an integral part of the nation and of the social fabric of Indian society. Minorities are protected by the Constitution, I believe that the new government cannot and will not want to go against the Constitution. As Christians we are confident," His Exc. Mgr. Stanley Roman, Bishop of Quilon in the state of Kerala had said at the time.

His Exc. Mgr. Albert D'Souza, Archbishop of Agra, (Uttar Pradesh), and general secretary of the Indian Bishops' Conference, added that sometimes "small groups of fanatics can give us concern," but argued that the Church "will continue in its mission to pray for the new government and contribute to the common good of the nation, supporting democracy, respect for pluralism, the rights of all and a secular concept in the political agenda."

Delhi Archbishop Anil J. Couto also has now raised concern at the rising attacks on Christians and churches in India in recent months. "It is very disturbing, and we request local authorities to take adequate measures to book the miscreants threatening to weaken the social fabric of this great nation," he said.

"The Sangh Parivar plan [is] to carry out shuddhikaran — attempts to re-convert Christians to Hinduism," the Archbishop continued. “This move by fundamentalist groups is a grave assault on the fundamental rights of individuals and people and groups."

Under the influence of rightwing militant groups, several gram sabhas have passed resolutions banning non-Hindu religious activity in villages in villages. This has seriously affected freedom of religion.

The act of sacrilege and hate against the Christian community is carried with impunity with very often law agencies remaining silent spectators. This will dent the image of the present government within India and abroad and leave the minorities vulnerable and targets of hatred,  Says , Rev. Dr. Richard Howell,  General Secretary, Evangelical Fellowship of India. Rev. Howell has been in forefront in taking up cases of religious freedom in India.

Christianise in India have become outspoken advocates for human rights and democracy, which means they are seen as threats to authoritarian regimes-especially since Christians often can plug into international networks for support that most other religious groups don’t have. The goodwill and human dignity approach of Christianity is seen as a danger in totalitarian states where allegiance to the nation is the highest value.

One important point is the role of Christens in pro – democracy and human rights movements. The “third wave of democracy”, which is based on liberation theology from Philippines social teaching and activism and Latin America is showing new ways to protest against injustice and social oppression. Christians are paying the price for standing for ‘dharma”.

India, as a country and nation, has always been secular and by and large, the majority community – Hindus – are very peaceful. India has never been a theocratic, sectarian or communal state. Religious intolerance, hatred, fundamentalism, etc., have never been part of their ethos, despite the fact that Indian masses have always been deeply religious. Respect for another’s faith has been the hallmark of Indian culture and civilization. Unity in cultural and religious diversity is one of the unique features of Indians. Live and let live, compassion, tolerance, non-violence, and adjustability have always been essence of Indian religious preaching and practice. Indian Constitution also guarantees its citizens full freedom in matters of religion, faith, and practice.

Despite all these, there have been conflicts, tensions, and frictions among the people and between different communities.

But what must be emphasized here is that majority of Indian society do not support harassment of minorities, and the authorities do prosecute and punish those involved. India is a genuinely pluralistic society, and that Indian Christian does not live in fear and submission the way the Christians in neighbouring Pakistan do.

India is passing through a strange situation. Majority of Hindus are peace-loving community; they respect other religions and are not communal. However, this majority is, let us say, facing the economic law of “bad money driving good money out of circulation.” The tail is wagging the dog. We need to be careful in our criticisms, lest we implicate good Hindus with the bad fringe elements belonging to the right wing groups.

The trouble is that the media who normally champions human rights seems to think persecuting is fine, so long as it is only against Christians. If such incidents were happening with other minorities in India, it would make front-page news and breaking news with TV channels. As a liberal secularist, I believe all persecuted people should be helped equally, irrespective of their religion.

(Joseph Gathia is a Delhi based journalist and human rights campaigner. He can be contacted at:jospeh.gathia@gmail.com)