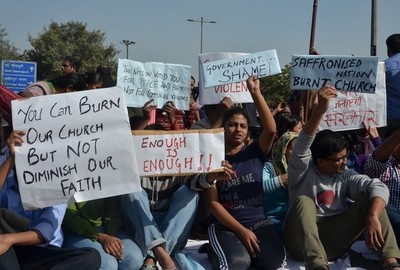 Mumbai – A Catholic forum of activists has called upon community members to observe a Black Christmas this year in the wake of increased threat from Hindu fanatic groups.

The CSF wanted government to investigate the matter and "prevent communal disharmony, which has far-reaching effects. "

The forum said Hindu fundamentalists seem to be emboldened with the new government but wanted Prime Minister Narendra Modi to caution the RSS (Rashtriya Swayamsevak Sangh) and restrain it from stirring up communal frenzy.

"We have no issue with any one changing religion, but not under duress or through inducement, as has been proved."

It noted that Union Minister for Social Justice and Empowerment Thaawar Chand Gehlot said that the government was not in favor of granting schedule caste status to Dalit Christian and Muslims, which is why these re-conversions are taking place.

Those who re-converted are from the lower castes or extremely poor, and "government needs to focus on this strata of Indian society, rather than use them as fodder for social engineering," said Joseph Dias, the CSF general secretary.

According to Dias, within months of the NDA taking over, incidents of 'ghar wapsi' (reconversion incidents) have increased, especially in UP and the Christians even in the national capital are unsafe, with a church burnt, another stoned and yet another attacked.

The RSS itself has put out figures of 2.73 lac minorities being reconverted in the Braj area of Uttar Pradesh alone.

The CSF called upon the community all over the country and NRIs to observe a Black Christmas, with prayers that Indian Christians may truly have freedom of religion.

"The re-converts will vitiate the social atmosphere and be used by the majority in the war against minorities", Dias feared.