Trump win a repeat of Brexit? What Trump’s win and Brexit have in common 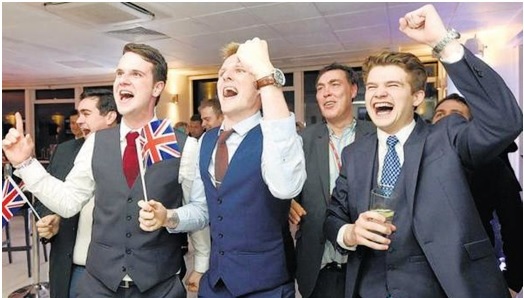 (Note: It looks Trumph’s victory  in US was basically a repeat of Brexit in UK as we hinted  in our last editorial. For both what they have in common are: 1. their white identity which is being diluted beyond recognition by the influx of a non-white ‘disorderly immigrants’ from outside. 2. Loss of jobs to outsiders who were proving themselves to be smarter and more enterprising, loss also through outsourcing.  3. Fear of globalization sweeping the world to swallow nation-states and their once commanding positions of name and fame. 4. Inability on the part of both to make smooth transition from local to global, from citizens of a particular country to global citizens which ought to become an  amalgam of local and global called: GLOCAL.

Humanity, believe it or not, is  on its inexorable, inevitable march towards unity and universality to achieve peace and prosperity that can come only through give and take, through sharing. Why? Because there is enough and more in this world for everyone’s need, but definitely not for every one’s greed. So remember,you can never become an island of affluence in a sea of  misery. What promotes common good (peace and prosperity) is altruism, what prevents it, is selfishness or unlimited egoism. Another name for “Common Good” is  Communism which has become bête noire, offensive and controversial today. Why? When paraphrased that word “Communism” should have meant: “All that is mine is yours”, that is,  a lived life of sharing through altruism. Instead today it has come to mean: “All that is yours is mine”, that is, a lived life of selfishness, grabbing what belongs to another, exploitation for  self-aggrandizement, which is driving one percent of a nation to amass a wealth equal to 99 % of the rest.

Once upon a time the so called Christian world spoke of the white man’s burden of conquering barbaric nations for humanizing, civilizing and Christianizing them. Now it has dawned on all that it is enough to humanize, because what is truly human is Christian, going by the standard of Jesus who never became a Christian but projected himself as the ideal humane human person (‘Son of man’, 85 times) while living as a very good Jew and dying as a Jew.

Now the challenge for the Little England (once Great Britton) and Trump leaping to stars to make “America Great”  is to build a multi-coloured humane humanity by constructing bridges of unity and not walls of separation, what is more, never again going back to the “Melting pot which never melted” situation, Gunnar Myrdal found US long, long ago. The native American Indians  they nearly exterminated and put the rest on reservations, (this scribe visited the “San Domingo pueblo” reservation in New Mexico in the 1960s). Does Trump who immigrated from Germany to settle in New York, now want to shut the door for new entrants and create new ‘Never-melting pots’  for all existing ethnic groups in USA? james kottoor, editor)

“Its going to be Brexit, plus, plus, plus,” President Elect Donald Trump – or “Mr Brexit” as he had once referred to himself, declared just days before his victory in the U.S. election. The similarities between the forces that drove him to victory, and those that led to the surprise British vote to leave the EU in June, is a theme he has returned to over and over again. He even invited Leave campaigner and former UKIP leader Nigel Farage to address one of his rallies in Mississippi back in August, who declared that they had succeeded in reaching the “little” people who believed they could “take back control” of their country, and their borders, “against all odds.”

“There are certainly parallels,” says Dr Brian Klaas, professor of politics at the LSE, of Trump’s electoral campaign and that to leave the E.U. “They were both anti establishment votes and a major cry for change, with latest racism involved in a movement, that used misplaced xenophobia to find a scapegoat for economic woes.”

“Trump’s election is an unmistakable rejection of a political establishment and an economic system that simply isn’t working for most people. It is one that has delivered escalating inequality and stagnating or falling living standards for the majority, both in the US and Britain,” said Jeremy Corbyn, Britain’s Leader of the Opposition in a statement on Wednesday.

In both cases their ability to put forward a clear message – whether it was the Leave campaign’s “take back control” or Trump’s “Make America Great Again” contrasted with that of their opponents, who struggled to match that clarity. It meant that any inaccuracies or untruths in the Leave or Trump campaign were pretty much ignored by their supporters “In both cases the establishment has not done a good job at articulating a vision for change to a population hurt by globalization,” said Klaas.

However, there were considerable differences too: while the anti-globalisation message certainly came into play in the Brexit debate it was less dominant than in the U.S., says Vinjamuri. The British leave campaign also lacked the personality cult that built around Trump, with no single figure attracting the kind of idolization that he did.

Nevertheless, what both countries now undoubtedly share are very fractured societies. “In both cases there is going to have to be much greater cooperation among deeply divided societies, where half want to go in one direction, and the other half in the other” says Klaas. “Articulating a vision that doesn’t involve going against your neighbour will be the challenge for 2017.”