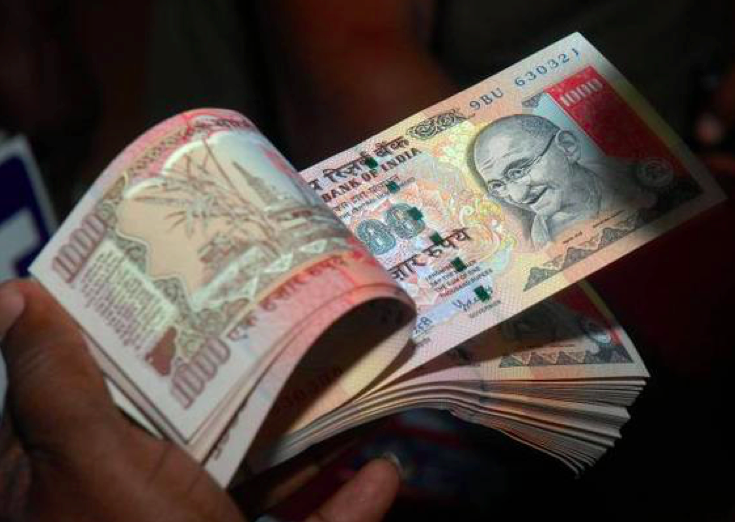 The Hindu, The Indian Statistical Institute, Kolkata study said that Rs. 70 crore fake notes were pumped into the economy every year.

(Note: Government move to demonotize should be supported by all. It will not wipe out all black money, but it will at least part of it. Corrupting agencies will be coming up soon to print fake notes of Rs.2000/- The Government could have given at least a week to reduce the hardships of poor people to have enough money for their daily use.

There seems to be no definite account of the number of counterfeit Rs.500 & 1000 in circulation. As per a 2015 study, any given point of time, fake notes with a face vaue of Rs.499 crore were in circulation in India. This is merely 0.025 % of the total budget outlay of Rs. 19.7 lakh crore this fiscal. In 2015, 17 crore Rs.1000 notes were recovred by law enforcers, as compared to 3 lakh notes of Rs.500 demoninations. This is according to Indian statistical Institute, Kokata and NCRB. You get the government you deserve. So we as good citizens should be

ready to put up with some inconveniences to support all good moves for public good. james kottoor, editor)

Underground operatives always store money in the form of big notes and that money has become a piece of paper now: official

The government has said one of the reasons to demonetise notes of Rs. 500 and Rs. 1,000 was to curb the circulation of fake currency, but there seems to be no definite account of the amount of such notes in circulation.

As per a study done by the Indian Statistical Institute, Kolkata, in 2015, the only concrete work done on the subject, at any given point of time Rs. 400 crore worth fake notes were in circulation in the economy. This is merely 0.025 per cent of the total budget outlay of Rs. 19.7 lakh crore as announced this fiscal.

Different agencies have their own estimates based on the recoveries made by them. According to the National Crime Records Bureau (NCRB), in 2015, various law enforcement agencies seized 1,78,022 pieces of fake Rs 1,000 notes. This means Rs 17 crore fake notes, which were in circulation could be calculated as they could be seized. Similarly, in 2015, as many as 2,99,524 pieces of Rs. 500 fake notes were seized.

The Indian Statistical Institute, Kolkata study, done on behalf of the National Investigation Agency (NIA), said that Rs. 70 crore fake notes were pumped into the economy every year.

Officials in the security establishment were upbeat about the demonetisation scheme as they expect that crimes like terror financing would be severely hit by the move.

“The fake notes can be detected only when they enter the banking system. If it is in circulation in the open market, then it’s hard to calculate the number. In the past two years, we registered 25 cases of fake notes and 26 persons were convicted in three cases and the remaining cases are still on trial,” said Alok Mittal, Inspector General, NIA.

Another official said that in 90 per cent of the cases, fake currency was pumped in through the land route from Bangladesh. “The fake notes are manufactured in Pakistan and they reach Bangladesh through air and sea route. An organised group then pushes the money into India through the porous border areas,” said the official.

On being asked how the yet to be launched Rs. 2,000 notes would be deterrent to the resurgence of the fake currency notes, an official said, “It is difficult to say and we can only assume that Pakistan or the elements involved in it would not be able to compromise the security features. It is true that certain security features of Rs. 500 and Rs. 1,000 notes had been compromised. The supplier of raw currency, the ink and the silver thread is same for India and Pakistan and we have been asking countries like the U.K, the U.S. and Germany, where these are manufactured to stop the sale to Pakistan.”

D.C Pathak, former Intelligence Bureau chief, said, “While removing black money, the process it [demonetisation] will definitely address the problem areas of terror financing and fake currency. There is illegal money behind terrorist funding. The channel through which the adversary sends in militants and arms is also used to send fake currency.”

An official said the demonetisation would impact the terror financing, particularly in Jammu and Kashmir. Terrorist outfits like Hizb-ul-Mujahideen collect donations in Pakistan and then route the money into the State through hawala operators. “The terror funding module in place right now, will be affected as the terrorist operatives always store money in the form of big currency notes. That money has become a piece of paper now,” said the official.

Jayadeva Ranade, distinguished fellow, Centre for Air Power Studies said, “It will be a blow to the main sponsors of fake currency, Pakistan and Wahabi groups. I don’t expect them to stop but it will take some time. It is a good move, hits them on many prongs. Many of their operators and sleeper cells here have fake currency. It will be a severe blow and for a few years we will get relief from this.”