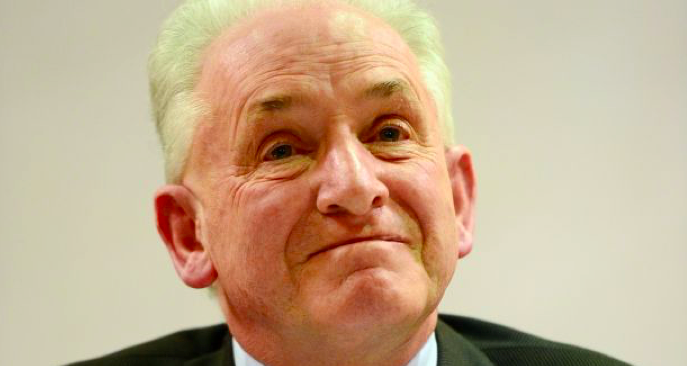 Redemptorist Fr Tony Flannery: ‘The Catholic priesthood as we have known it, this male celibate thing, is gone

(Note:  It used to be said about Ireland and Irish that they are  more catholic than the Pope. Catholicism used to be in their veins. Now things seem to have turned topsy-turvy.  Has Catholicism gone to dogs in Ireland? It made history when the country as whole voted for gay marriages. Also think of the  Irish saint Malachy, the 12th century bishop of Armagh  who predicted there will be only one more pope after Benedict,  Francis  the  266th  pope. Those who believe in fables, visions and dreams of saints must now realize that the Catholic church is now gasping for its last breath, because there is no doubt that Francis is the 266th  predicted by Malachy.

So will Francis be presiding over the dissolution of the Catholic empire as Winston Churchil was over the colonial empire? In any case the Catholic hierarchical pyramidal structural  Church we have dates back only to AD 312, when Emperor Constantime  appeared on the horizon  to liberate a persecuted followers of Jesus living like rats hiding in holes called Roman Catecombs. As for  the priesthood of women,  why make a hue and cry over it, when so many learned priests and scholars  deny that Jesus ever instituted a priesthood. Neither was Jesus a priest. He fought against the High priestly class of his time and lost. This scribe wrote long ago that there was no scriptural basis for priesthood.  Just two days a Fr.(dr.) Valiamangalam, a scripture scholar has written an article; “Jesus and Priesthood” (See Almayasabdam blogspot in Malayalam) giving any number of scriptural quotes and references to demolish that Jesus instituted a priesthood. This scribe himself wrote long ago: “No Scriptural basis for Priesthood”

A whole lot of Catholic priests who keep up study know it to be so,  but they don’t say it aloud, not to forfeit their only bread winning profession.  As the article below says they don’t want to make the mistake of saying it public (that they don’t believe in their priesthood) and “lose their ministry” just as the gay high ranking Vatican cleric revealed he was gay before the second ordinary Synod and got fired from his well-paid  Vatican  job. Many priests who keep up study, (most priests stop their studies with their ordination) don’t speak out their honest convictions for two reasons: 1. Not to scandalize the too credulous, superstitious,

ritualistic and illiterate laity, 2.not to make life difficult for themselves by cutting the branch on which they are sitting and avoid being frowned upon by  superiors and conservatives. Courtesy demands their lives are not made more difficult than what they are.  james kottoor, editor)

Dissident Irish priest Fr Tony Flannery has said the Catholic Church in Ireland is in such “serious crisis” that it may well have gone beyond the point of redemption.

Fr Flannery, a Redemptorist priest who was suspended from duties in 2012 by the Holy See, was speaking in Rome on Wednesday at a meeting of WOW (Women’s Ordination Worldwide) in the celebrated House of Women, just down the banks of the Tiber from the Vatican.

Fr Flannery’s support for the concept of women priests in the Catholic Church was one of many issues which led to disciplinary sanctions against him.Despite that, he repeated his support for women priests , saying: “We all know that the Church in Ireland is in serious crisis, indeed a lot of people would say at this stage that it has gone beyond the point of redemption.

“If you could release the energy of women, it would make a dramatic change. I’d say for example that a fair number of Redemptorist priests agree with what I say about women priests but they just think that I made the mistake of saying it publicly,” he said. “A lot of them keep their heads down because they don’t want to lose their ministry.

“The argument that a woman cannot be a minister of the Eucharist because she cannot be a persona Christi (someone who acts as Jesus and as God), that is such a ridiculous argument. “That argument belongs to the time of the flat earth, when Galileo was persecuted.“It is depressing and sad and disturbing that Pope Francis, a man for whom we have so much hope, seems to have that dreadful attitude (towards women priests)”.

Fr Flannery said parishoners “have moved light years ahead of the bishops in attitude”, which makes it difficult to maintain a dialogue with an ecclesiastical authority that is out of touch.

He said that within the church reform movement, people were warned “not to talk about the ordination of women”, because that was too “radical”. Even though he conceded Pope Francis remains doctrinally conservative, he said he is “still quite hopeful” about the reform movement.

“The Catholic priesthood as we have known it, this male celibate thing, is gone,” he said. “So while all of that is happening, it gives me hope for real, real change. I certainly won’t live to see it…if it bears fruit in one hundred years’ time, it will have been worth doing. As for Ireland, it is no longer a Catholic country. A lot of people now say I don’t see what the issue is anymore, people just take it (sexual equality) for granted. Young Irish people will tell you that this Church is mediaeval in its thinking, they simply don’t care.”