Pope Francis’ May prayer intention: honor the dignity of women 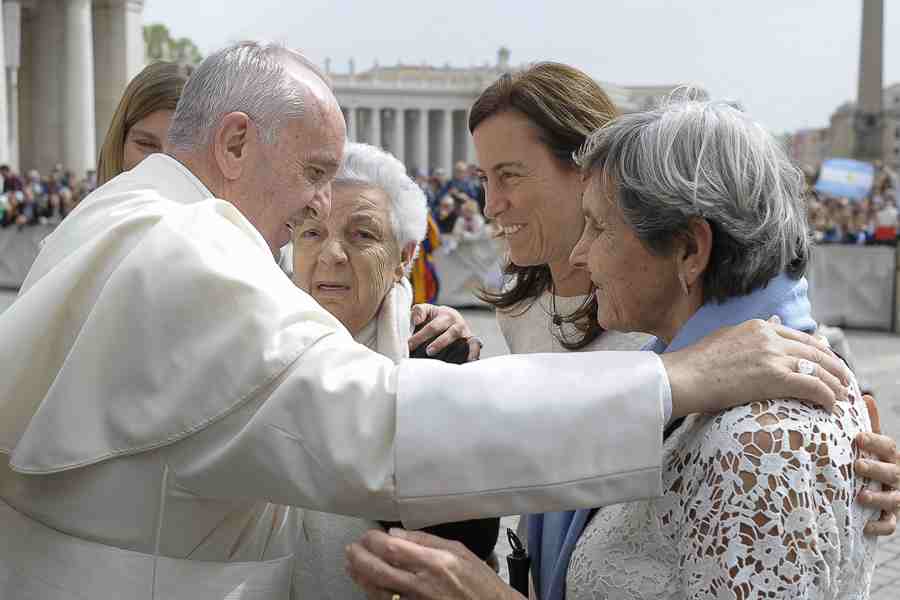 By Elise Harris. Vatican City, May 3, 2016 / 11:48 am (CNA/EWTN News).- In his May prayer video Pope Francis issued a global petition that women in all countries would be respected and valued, asking rhetorically if the mere recognition of their role is enough, or if more can be done.

“The contribution of women in all areas of human activity is undeniable, beginning with the family. But only to recognize it – is that enough?” the Pope asked in the video, published May 3.

“We have done little for women who are in very difficult situations: despised, marginalized, and even reduced to slavery,” he said, stressing that “we must condemn sexual violence against women and remove the barriers that prevent their full integration into social, political and economic life.”

The Pope speaks in Spanish as images of women working in various fields, including science, teaching, and medicine flash across the screen. However, women in desperate, marginalized circumstances also appear next to phrases such as “I do my job as well as a man,” “I will never be a slave,” “no gender violence,” and “enough of discrimination at work.”

A final image of a woman writing on a chalkboard appears next to the phrase “men and women are children of God,” as Francis asks viewers to join in his heartfelt petition “that in all countries of the world women may be honored and respected and valued for their essential contribution to society.”

Pope Francis’ prayer video was the latest in a new series of short clips dedicated to his monthly prayer intentions, called “The Pope Video.”

An initiative of the Jesuit-run global prayer network Apostleship of Prayer, the videos are filmed in collaboration with the Vatican Television Center and mark the first time the Pope’s monthly prayer intentions have been featured on video.

Since the late 1800s the organization has also received a monthly, universal intention from the Pope. In 1929 an additional missionary intention was added by the Holy Father, aimed at the faithful in particular.

While there are two intentions, the prayer videos are centered on the first, universal intention.

The universal intention is that “in every country of the world, women may be honored and respected and that their essential contribution to society may be highly esteemed.”

The Pope’s missionary intention for May, which is dedicated to Mary, is that “families, communities, and groups may pray the Holy Rosary for evangelization and peace.”

The Pope’s May video was released the same day as a new version of a Vatican publication on women, called “Women, Church, World,” which is linked to the Vatican newspaper L’Osservatore Romano.

Established in 2012, the publication has been expanded to a 40 page, color magazine published every two months and designed to give voice to women from around the world on a variety of topics related to the role of women in the world.

In addition to covering the traditional topics of major questions linked to the role of women in the Church, the new version of the magazine will now include two new meditations on the topic of each specific edition. The first is a meditation on scripture, while the second will be dedicated to art.

The May edition has already been released and is dedicated to the same topic as the first edition of the publication in 2012:  the Visitation.

Vatican Secretary of State Cardinal Pietro Parolin, who spoke at the May 3 presentation of the new version of the magazine, said in comments to journalists that the publication is “a very important initiative” in terms of understanding and reflecting on the role of women in the Church.

He noted how women have made contributions of “exceptional value” to the Church throughout history, and named St. Catherine of Siena as one of the Church’s most influential female giants.

The cardinal condemned the idea that there ought to be a “gender quota” in the Vatican, and stressed that in his experience, what women really want is “to advance with their merits (and) their abilities, without reserved institutional spaces.”

Women, he said, “must have their contribution for what they are, for what they do,” and not so much for what is set aside for them. This, he said, is why he sense a certain “reluctance to accept this concept of the gender quota.”

In terms of top positions or management roles in the Church, Cardinal Parolin stressed that the Church has positions “that are already definitive,” such as when it comes to the priesthood, for example.

In order to overcome an attitude of machismo within the Church, the cardinal encouraged the promotion of initiatives, such as the magazine, which create space for women to have a voice and give their own contributions, and which “nourish what can also be a heritage” for the Church and for the world.