OFF THE CLIFF : When will India’s Economy Show the Green Shoots of Recovery?

Mr Varghese Pamplanil, the erudite thinker and writer par excellence, suggested to me that the article below be published in CCV for the enlightenment of our valued readers. Being a former Deputy General Manager of the Reserve Bank of India, Mr Pamplanil certainly has in-depth knowledge about India's economy, especially post-Covid recovery. Mr George Neduparambil, another banker may certainly have a word or two on this article.

In March, the Narendra Modi government imposed a lockdown to prevent the spread of the Covid-19 pandemic. While containment measures had been used by many other countries, the scale of India’s restrictions were unique, bringing the country of more than 1.3 billion people to a sudden halt.

Unsurprisingly, the economic hit this caused was staggering. No other major economy was as badly affected by Covid-19 as India’s. In the April-June quarter, the Indian gross domestic product shrank by 23.9%—the worst contraction ever in the country’s history. The economy also shrank in the following quarter as India entered its first economic recession since the British left in 1947.

Projections for the year 2020 were similarly dire. The International Monetary Fund (IMF) calculations showed that the hit India’s economy took from the coronavirus was uniquely intense. 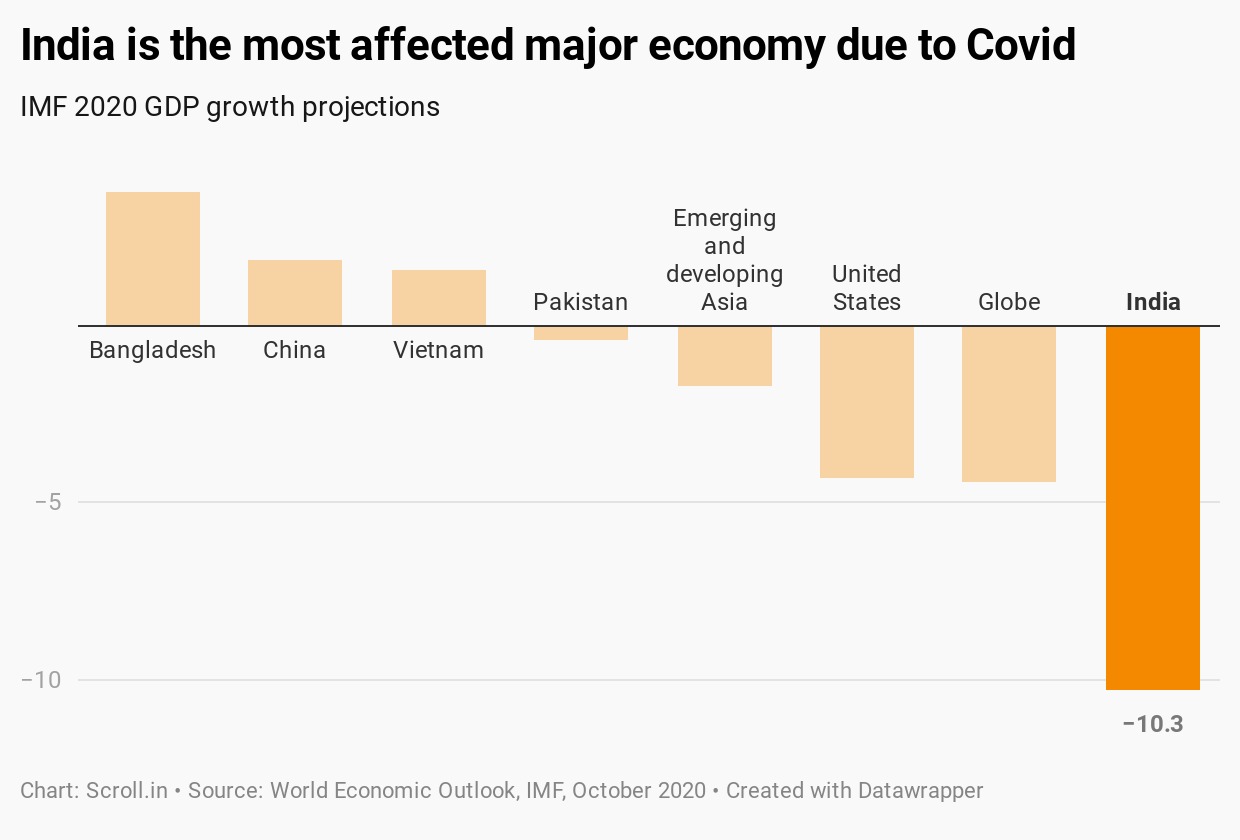 To counter this economic doom and gloom, the Modi government has pushed the idea that the Indian economy will rebound very rapidly. It will be a “V-shaped recovery,” according to the finance minister Nirmala Sitharaman.

Does this mean that the Covid-19 contraction was only a blip and then things will get back to the pre-pandemic path soon? That is unlikely.

Take a look at the IMF per capita GDP predictions, for example. This year, 2020, sees a plummet by 11%, making Indians on an average poorer than Bangladeshis.

How long will this figure take to recover? The IMF predicts that the recovery itself will take three years and it will only be at the end of 2022 that per capita GDP will be back at pre-Covid-19 levels.

Sabyasachi Kar, who holds the Reserve Bank of India Chair at the National Institute of Public Finance and Policy, predicts that India would take much longer to truly wipe out the effects of the lockdown and get back on the pre-Covid growth path.

According to one model Kar has drawn up, it will take up to 2033 for India to get back on the pre-Covid growth path. This is assuming that India’s recovery is truly significant and its GDP grows at a very high growth of 7% for the next 13 years. 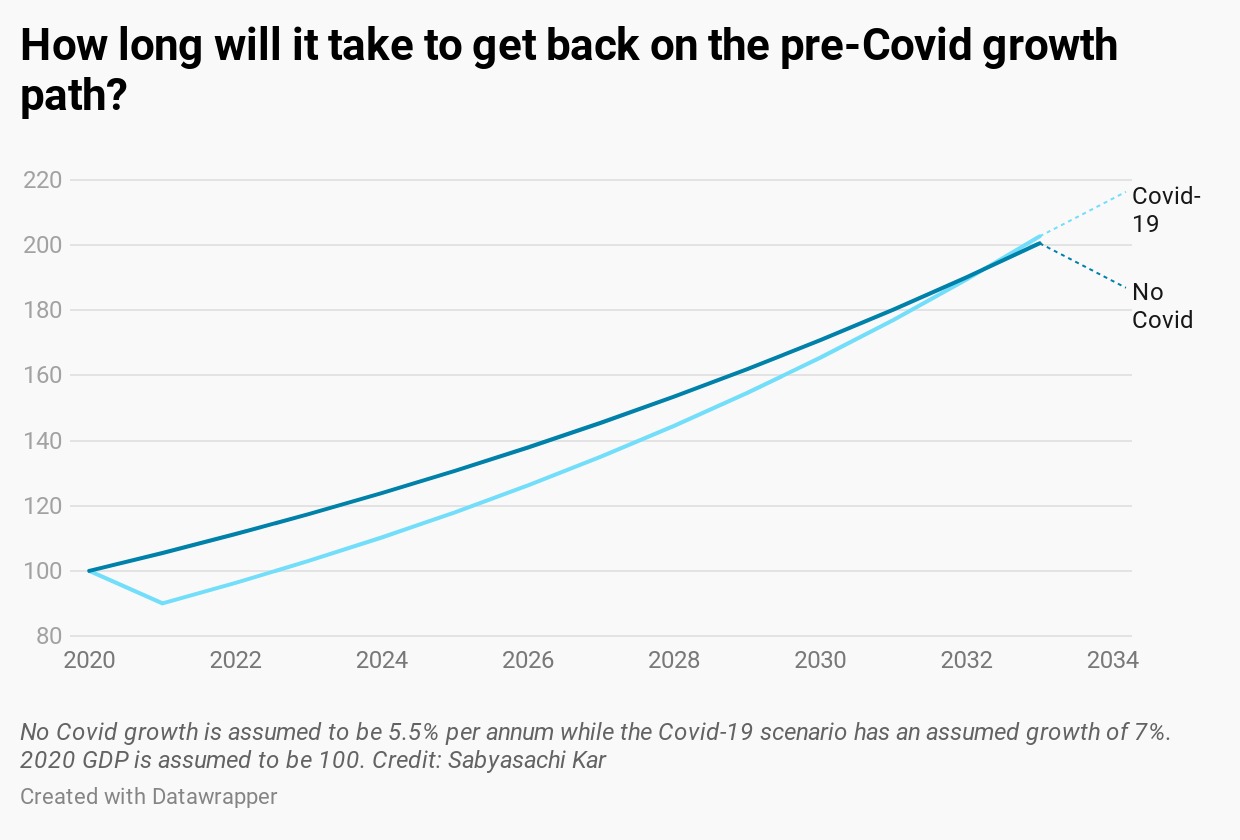 In another iteration, Kar assumed that the Indian economy would shrink by 5% (and not the IMF-projected 10%). Even then it would take till 2029 to get back to the pre-covid growth path.

Kar’s projection highlights that talk of a V-shaped recovery doesn’t take into account how any contraction in the economy has a long-term cascading effect downstream for many years given the nature of compounding growth. Thus even optimistic projections of recovery tend to elide that it might take decades to overcome the effects of Covid-19.

Moreover, any deviation from a very robust recovery means that this date will get pushed back significantly. According to a projection by Scroll.in, if India’s growth rate was assumed to be 6.1% (the growth rate in 2018-’19) rather than Kar’s 7%, it would take three decades (until 2049) for India to get back on the Covid-19 growth path.

A number of independent voices have argued that India will not have a sharp, V-shaped recovery as being argued by the government. Research group Oxford Economics has predicted that India would struggle with low growth right till 2025.

Kar argues that discussions on India’s recovery are not properly taking into account the potential loss due to this long time scale of recovery. “This comes back to what I’ve been saying: whatever policy fiscal policy is needed to get growth on track should be adopted. Even if the deficit goes up,” Kar said. ”Since you have such a big potential loss. The discussion is not taking into account the full pros and cons. Even in optimistic scenarios of recovery, the loss is immense.

For example, Indian states are seeing their capital expenditure fall. Capital expenditure records the money spent on fixed assets—which in the case of a government would be roads or power plants—and is a critical measure to spur growth in the future.

This is troubling since, in the Indian scheme, the vast bulk of capital expenditure is made by the states.

To make matters worse, the revenue contraction due to the pandemic has meant that 2020 is seeing a significant capex contraction even over and above that seen in the previous years.

“Twelve major state governments may have to undertake an aggregate cut of Rs 2.5 trillion-Rs 2.7 trillion in their budgeted capital spending in FY2021, on account of the pandemic-induced strain to their revenue receipts,” think tank ICRA has projected.

This strain is already reflected in the accounts of the Union government. According to data put out by the CAG, capital expenditure was only 40.3% of budget estimates at the end of the first half of 2020-’21. This figure stood at 55.5% for the corresponding period the previous year.

The Reserve Bank of India, in its “State Finances: A Study of Budgets of 2020-21” report has predicted that a sharp contraction in capex for 2020-’21 relative to budget estimates “can be expected” due to “lockdown (in Q1) and monsoons (in Q2)“.

This lack of investment means that optimistic scenarios of recovery would get more and more improbable and the incredible growth that India saw in the 1990s and 2000s might end up being hard to get back to.

The piece was originally published on Scroll.in.