By not saying ‘Rohingya’, Pope Francis was just protecting his own

‘Many people are disappointed that he failed, in his keynote address in Myanmar, to use the politically and emotionally charged word Rohingya.’ In the pic: Pope Francis and Aung San Suu Kyi. Photograph: AFP/Getty Images

(Note:  When the Papal visit was planned long ago in June, the  Muslim Rohingya minority issue was never a  borne of contention. But now he comes after an exodus of more than 620,000 Rohingya from Rakhine state to the southern tip of Bangladesh after a military crackdown that the UN, US and UK have described as ‘ethnic cleansing’.That makes the word ‘Rohingya’ equivalent to ‘etnic cleansing’ and forbidden in the ears of the military rulers. And how could  the Pope appear to be too critical of the  military in Myanmar? That forced the  Pope to avoid the use of that word.

Diplomacy demands of him, as the head of the Vatican state, to avoid all hurting words though his role as a spiritual leader of the whole world demands of him to bear witness to truth, to call a  spade a spade. Equally Aung San Suu Kyi was a recipient of the Nobel peace prize for her stand under house arrest for human rights and she didn’t have much of a say in the latest Ethnic cleansing  by the military and the fanatical Buddhist militias and she could not control either one. So both the Pope and Aung San Suu Kyi are placed in a very delicate situation for speaking out their mind forcefully which could do more harm than good for the very small number of Catholics, a tiny community, in the country.

White is the colour of peace, and no one on the world stage wears it bigger than the pope. Francis is never seen in anything else: his cassock, skull-cap, cape all dove-coloured.

It underlines his role in the global spotlight, so it’s understandable that many people in the world today are disappointed that he failed, in his keynote address in Myanmar, to use the politically and emotionally charged word “Rohingya” to stress his criticism of the crackdown on the Muslim community of the country. In the past, Francis has used the term, denouncing “the persecution of our Rohingya brothers”, who he said were being “tortured and killed, simply because they uphold their Muslim faith”. 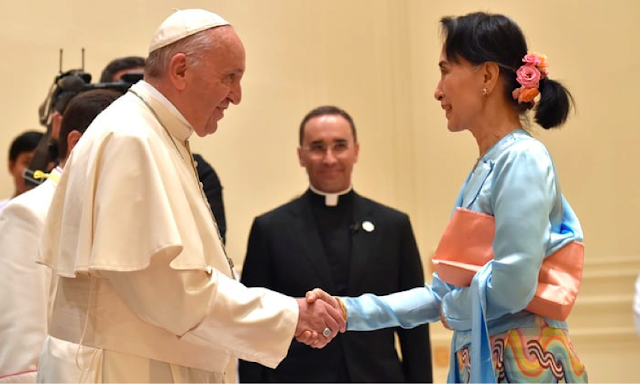 This visit would never have been organised if the powers-that-be at the Vatican had known then what they know now. The trip was conceived back in June, when the then-untarnished Aung San Suu Kyi had a cordial visit to Rome, and diplomatic relations between the Vatican and Myanmar were re-established. But in August, the current wave of violence against the Rohingyabegan; and although it became increasingly clear that Francis was wading into a political and diplomatic minefield by going to visit the country, the planning went ahead.

The men who run the Vatican aren’t on the whole risk-takers, which is both why the current pope is a breath of fresh air, and also why he has so many enemies within his own kingdom. But nor are they back-downers: so although the political situation has made the trip more and more dodgy, they ploughed on with it; and the uncomfortable result is that, in the week Oxford announces it is withdrawing the freedom of the city from the Myanmar leader, one of its most prominent alumni, in protest at what is happening to the Rohingya, pictures are beamed around the world of her meeting the pope – and, worse, he has bowed to pressure not to refer to them by name.

It all seems a bit of an embarrassing muddle for the Argentine pope; but the fact is, his role as he crosses the globe, frequently heading into war zones and other difficult situations, is always a bit of a muddle. Because what exactly is he doing in the countries he visits? Is he there as a pastoral leader, head of the Catholic community in that place; or world leader – and in that case, from where does his authority derive?

The truth is, and this visit has made this abundantly clear, the primary role of the pope is as the leader of the Roman Catholic community. The first people he must protect are his own; which is not unreasonable for any leader. So when his representative in Myanmar, Cardinal Charles Maung Bo, warned him that if he used the word “Rohingya” he might compromise the situation of the country’s tiny Catholic minority, Francis felt he had no option but to back down.

The Catholic church has many strengths, including in its humanitarian work – after all, it has representatives across the planet, and for all the bad apples we’ve become increasingly aware of, there are many good men and women working tirelessly to improve the living conditions of people who live in challenged situations. But it has weaknesses too, including the fact that its leader, while he might look like a world peacemaker, must look out first and foremost for his own people. And that, it seems, is what has had to happen here.