Man’s World must go, to make it Humane! Kerala shows the way! 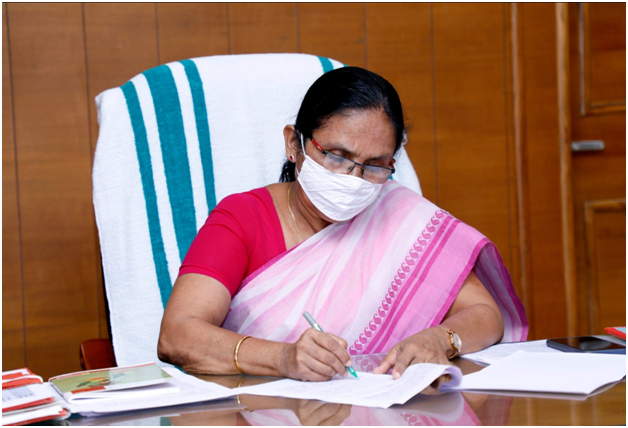 Kerala has underlined the importance of two aspects about the role of leadership in tackling the crisis. One, the effectiveness of bottom-up involving people at the grassroots with preparedness, planning and implementation rather than top down, top-down one person centric approach. Second, the inspirational role played by a woman in a crucial area like healthcare has demonstrated that effective disease containment is possible not only in a democracy, but in a poor one. Similar successes have been reported in countries that have women heads of government/state Bangladesh, Denmark, Finland, Germany, Iceland, New Zealand, Norway and Taiwan.

Note: This Article by Sushila Ramaswamy New Delhi, is published to drive home two main ideas: (1) Woman’s inspirational role in all human leadership activities (2) Effectiveness of  “bottom up as opposed to top down” approach to be followed, that is, full participation and collaboration of the ruled  as opposed to a one man dictatorial ruler imposing his will, whether in politics or religion.

From this flows many other truths and principles:
(1) Gender equality calls for equal pay for equal work

(2) Basis of Democracy – accepted so far, as the best form of government — is voting rightes; still it is denied to women in some countries

(3) Perfecting and embellishing Democracy by replacing ‘one  Man, one vote’ (India) with ‘one Human one vote’ because neither the oldest nor the biggest democracies existing in the world are perfect but flawed with defects galore.

(4) Whether in the so-called civilized or barbarous world – de facto the world has become a close-knit-humanity – we all are still living in a MAN’S WORLD.

(5) What is still needed is to make it a world of Humane Humanity of love and care. It is possible only in a family setup.

(6) The oxygen for the survival of family life is the realization that humans made up of men and women are not independent but interdependent to the extent one cannot survive without the other.

(7) What is the basic cause of all inequalities, division,  hatred, conflict and war? Some one has given what may be considered as the scientific, ontological, rational, philosophical, theological and religious reason: It is because both men and women fail to realize one fundamental truth: “Men and women forget they cannot be ‘fully human’ without one another. Man without woman is not fully human. And woman without man is not fully human either. Each without the other is a piece of humanity, incomplete!"

One who said it is  Cardinal JoãoBraz de Aviz, Prefect of the Vatican's Congre -gation for Religious, a group of around 2000 leaders around the world. 8. If he is correct, then the burden is on each one of us,  to stop being just men and women only but to  become radically humane which is possible only by loving, caring, sharing and serving without caring to rule at all.

Your servant at this end!

That reminds me, what happened when I was literally “Nobody” and phoned up  a Bishop who answered saying: “Your servant at this end!” which simply floored me! My only unforgettable experience in life! Can we make today’s Man’s world truly HUMANE? We surely can with such servant Bishops and serving lady Leaders like Shailaja teachers and other lady leaders at the helm of nations mentioned above. james kottoor, editor ccv.

Much before the nationwide lockdown was announced by the central government on 25 March, Kerala was fully prepared to contain the spread of the deadly coronavirus and that has resulted in impressive dividends.

It has till date the lowest tally in the country with 4 deaths and 897 active cases, while the all-India tally is over 60,000 active cases.

Its mortality rates in the first two phases is just 1 per cent, the best in the world. Kerala’s first-time Health Minister, Ms KK Shailaja ‘Teacher’ and her team of 24 members consisting of police and public officials drawn from across the state are at the heart of tackling this crisis.

‘Teacher’ is suffixed along with her name as she was a former chemistry teacher. She is described as a ‘coronavirus slayer’. Her day begins at 7.30 a.m. and ends around 2 at night as she oversees health, women’s empowerment and welfare for the old, the disabled and the transgender.

Her calm and smiling persona even at times of extreme adversity, empathy and transparency in functioning and her knowledge of science are seen as being crucial in addressing the pandemic’s severity.

She says she has imbibed the spirit of social service from her grandmother who had no formal education but being a local leader had taken care of those affected by the smallpox virus by cleaning and feeding them and would enter her home only after washing herself thoroughly in a nearby pond so as to prevent her children from being infected.

Shailaja lauds her grandmother’s bravery and says there are many such brave women in Kerala. Her experience with Nipah virus in 2018 that killed 18 people and now the corona pandemic has underlined for her the need to take seriously highly contagious diseases in the absence of vaccine or treatment. Her handling of the Nipah virus inspired a Malayalam film Virus (2019) with Revathy playing her role.

On 20 January, having come to know about the spread of the virus in Wuhan, Shailaja asked one of her medical deputies as to whether the virus could reach India.

On getting an affirmative answer she put together a rapid response team and directed the constitution of similar teams in all the 14 districts of the state, dedicated 500 beds for Covid-19 patients in 10 medical colleges and adopted the WHO protocol of ‘test, trace, isolate and support’ in right earnest.

Screening of all passengers started in the four international airports within the state following the first case that arrived via a flight from Wuhan on 27 January. All those who displayed symptoms were taken to a government facility immediately.

By the end of March there were more than 134,000 people under surveillance with 620 in government healthcare centres and the rest in home isolation with regular visits by some 40,000 health workers at the state government’s expenses.

Attention was given to people with special needs and the elderly living alone. Random testing of asymptomatic people and those in the most exposed groups, health workers, police and volunteers was undertaken meticulously.

Armed with test results that were available within 48 hours and rigorous contact tracing with the help of detailed ‘route maps’ of people returning from abroad were measures adopted to tackle the pandemic.

This was undertaken in view of its porous borders with a large number of migrant or ‘guest’ workers and a huge expatriate population whose remittances fuel the state’s economy.

Mr Pinarayi Vijayan, the chief minister, ordered a lockdown within the state two days before the announcement of the national lockdown.

Schools were shut, large gatherings were banned, visiting places of worship prohibited, internet services were stepped up to enable those who had to work from home, production of hand sanitiser and face masks were increased, school children reliant on free meals were fed, the community kitchen scheme to feed the poor was announced, rice, oil and spices were provided free of cost, 150,000 migrant workers were fed three meals a day for six weeks since the end of March and sending many of them subsequently home by charter trains, the date of state pension payments was moved up and a mental health helpline was set up.

These measures lessened people’s fears and increased trust in government’s efforts. The rest of India, in contrast because of a hurriedly announced national lockdown had to fend for themselves.

Kerala’s population is 35 million with GDP per capita of $ 2900. It is among the smaller states in India but similar to California in population size. Its literacy level of 94 per cent, which is the highest in the country, has enabled its people to respond positively to the government’s wide dissemination of information of Covid-19.

Much of the information is in Malayalam. Its decentralized public health system with a primary health centre in every village and hospitals at each administrative level, highest life expectancy, lowest infant mortality, extensive land reforms and poverty level at 1.07 per cent, the lowest level in India has helped in fostering public trust and collective social action.

This is in striking contrast to the CPM-led Left Front’s uninterrupted 34- year rule in West Bengal. The impressive achievements in Kerala lauded by many, pre-eminently Amartya Sen and Jean Dreze.

Her work has helped the government to fight the current pandemic as people understand the importance of education, health and well-being. Kerala has underlined the importance of two aspects about the role of leadership in tackling the crisis.

One, the effectiveness of bottom-up involving people at the grassroots with preparedness, planning and implementation rather than top down, talk down one-person centric approach. Second, the inspirational role played by a woman in a crucial area like healthcare has demonstrated according to Spinney “that effective disease containment is possible not only in a democracy, but in a poor one”.

Similar successes have been reported in countries that have women heads of government/ state ~ Bangladesh, Denmark, Finland, Germany, Iceland, New Zealand, Norway and Taiwan as these have seen low death-rate and a more empathetic and effective handling of the current crisis.

Many women in Italy, among the countries with the highest death tally have signed a petition demanding greater representation for themselves in their country post this pandemic. It is important to incorporate women in the decision-making process and at work and bridge the existing gender divide.